Bad news has come to Italian tennis star Fabio Fognini and his fans – the world number 24 has been forced to withdraw from Sao Paulo this week. The Italian had to retire last week in his second match of the Rio Open against Spaniard Daniel Gimeno-Traver while up a set and down 1-3 in the second. He has suffered a rupture of the oblique abdominal and the nagging issue has caused him to rest to try and return as soon as possible.

It has not been the best start of the season for Fognini as he has struggled to find a rhythm in his matches. At this year's Australian Open, Fognini suffered a tough first round exit at the hands of Gilles Muller in a tight four sets that all went to tiebreaks, follows by a first round exit in Buenos Aires to Federico Delbonis which was especially dissapointing. The draw seemed to open up in Rio for Fognini to be one of the favorites to lift the title. It was a shame when the Italian was forced to retire as he looked to start getting back to his top form.

Fognini took to social media to tell his fans about his situation and condition. 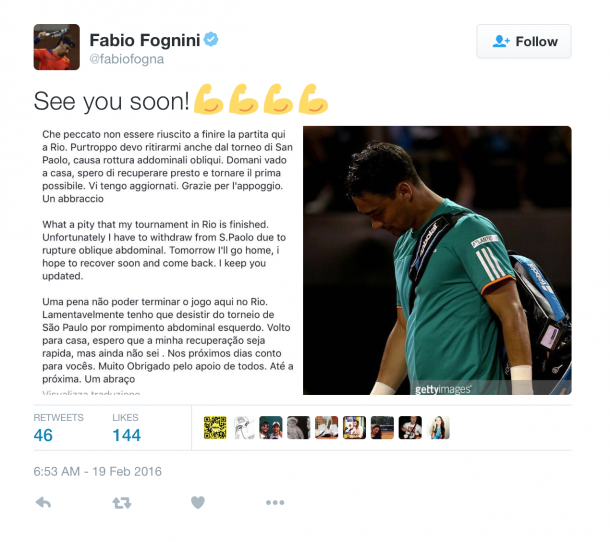 The Italian reassured his fans, 'I hope to recover soon and come back. I keep you updated.'

Fognini in Doubt for Davis Cup

Italian tennis fans are worried as Italy is set to face off against Switzerland in a Davis Cup first round matchup. The tie is from march 4th to 6th on clay in Italy. Fognini is in doubt to play and if absent, could prove to be a big loss for the team. He is aiming to make his return from injury at the tie but if not, will look to play Indian Wells.

It is an important part of the season for Fognini as he is known as a clay court specialist. In Rio, the Italian was the defending finalist and lost 300 points, and next week he will be world number 28 (-4 than last week). If he wants to maintain a high ranking, he will need to get back and start getting big results.