Eugenie Bouchard was ready to continue her quest to redemption in Miami. The Canadian had won fifteen matches this year already which is a huge improvement from the twelve matches she won in 2015. Bouchard’s campaign in Miami would start in a clash against Lucie Hradecka. The Czech lead their head-to-head 2-1, the last meeting being in 2015 where Bouchard triumphed.

Last year, Bouchard was the sixth seed but faced a tough defeat in her debut match against Tatjana Maria in straight sets. Meanwhile, Hradecka was not able to get a spot in the main draw. This year, things were different, Bouchard was unseeded and Hradecka didn’t have to go through the qualifying process.

Although the Canadian showed signs of life after losing the first set, her effort was not enough in the third set and had to face another tough loss in Miami. After one hour and fifty-two minutes, Hradecka got her pass to the second round at the Miami Open with a scoreline of 6-4, 3-6, 6-2.

Four unforced errors from Hradecka gave Bouchard a hold to love in the opening game of the match. Hradecka was the first one to do some damage after breaking Bouchard, followed by a hold to love to lead 3-1. From this moment it was clear that the Canadian was struggling to keep the pace imposed by the Czech. Bouchard tried to finish the points quickly which only lead to make more mistakes and finally to hand a second break to Hradecka after a double fault on break point.

Hradecka was running away with the set and the frustration of Bouchard started to be visible as she talked to herself after that double fault. The Czech didn’t drop her level and was controlling all the points, hitting deep groundstrokes to lead 5-1. At the start of the seventh game, Bouchard started to show signs of life as she hit her first ace of the match and eventually played her best game of serving to win a second game in the set.

The come back from the Canadian was on the rise when she hit a quality return to break and close the gap. From being on the verge of losing the set, Bouchard held her serve to be just one game away from Hradecka. Her body language was different as she looked to be more focused and motivated. Hradecka received some words of encouragement from her coach as she was about to serve for the set for the second time. The Czech secured the first set 6-4, after hitting a forehand passing shot.

Before the set started, Bouchard called her coach Thomas Högstedt who started telling the Canadian she still could win the match. “Telling me that doesn’t do anything,” Bouchard replied as the frustration of losing the first set became more evident. The talk with her coach must have worked as she saved a break point in the first game of the set and later on went to break Hradecka to lead in the match for the first time.

The lead didn’t last long as Hradecka broke back, but the Canadian wasn’t going to give up that easily and took a second break to lead 3-1. The improvement from Bouchard continued to grow as she held her next game to love, putting some pressure on the Czech to hold her next game. Even if Hradecka was playing like in the first game, she still was break behind and breaking Bouchard’s serve seemed like a hard task to accomplish as the Canadian continued playing her best tennis to lead 5-3.

The crowd began to get involved as the chant of ‘Let’s go Genie, let’s go’ started to sound in the stadium as Bouchard prepared to serve the set and force the match into a decider. The Canadian needed just one set point to win the second set 6-3.

Hradecka Too Strong for Bouchard

Both players started the last set with their best tennis, Hradecka continued to hit deep groundstrokes and even got an early break point that Bouchard saved hitting a great serve that dragged the Czech to hit a long ball. They held their serves in the next two games to 2-2 in the last set. The Canadian had a chance to be the first the break to get an early lead, but she failed to convert it when the Czech hit a strong serve.

Hradecka seemed to be enjoying the match and it was clear to see why. She was attacking Bouchard’s serve and even if she failed the smile never left her face. On the other side of the court, Bouchard had no reasons to smile as she faced two break points. The Canadian committed her second double fault in the game to give the break to the Czech, who now led 4-2.

The Czech didn’t hesitate with her serve and after a few exchanges, she was one game away from the second round. Bouchard was back on serve and she would attempt to stay in the match, but the Czech struck first again and got her first match point. Bouchard's serve didn’t fail her at that crucial moment and helped her to save the match point. The Canadian would save a second match point, but she wasn’t able to save a backhand winner that awarded the win to Hradecka. 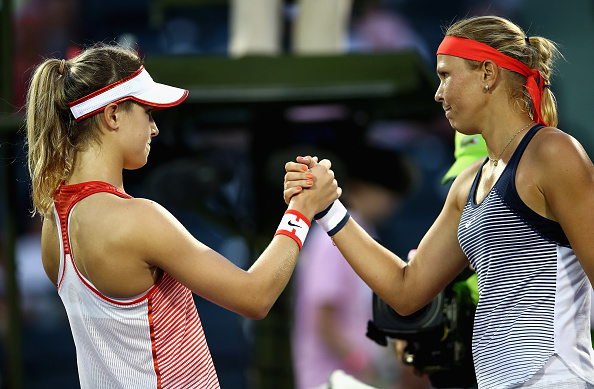 Next for Hradecka: Roberta Vinci

This will be the fifth meeting between these players. Roberta Vinci leads the head-to-head 4-0. Their last meeting was in 2015 in Rio de Janeiro, where the Italian prevailed in two sets.