On Sunday, Agnieszka Radwanska was leading Tsvetana Pironkova 6-2, 3-0 before weather conditions forced them to stop. The match was set to be resumed on Monday but because of poor weather all matches were canceled. Two days later, the players came back on court to finish their fourth round match. Radwanska was expected to close the match, but she didn’t expect an inspired Pironkova to hit the court today. The Bulgarian and former Wimbledon semifinalist took the second seed by surprise winning ten games in a row. Not only she took the second set, but she went on to book a spot in the quarterfinals of the French Open after upsetting the second seed, 2-6, 6-3, 6-3.

Radwanska Too Strong for Pironkova

It was a shaky start for the second seed who had to save a break point in the first game after hitting a backhand unforced error. Pironkova failed to convert this opportunity and she paid a high cost in the following game when after another long game Radwanska got the break, leading 2-0. However, Pironkova recovered the break in the following game. The Pole was determined to get back the break and she showed that when she got the first break point. The Bulgarian was on the edge, as every ball Radwanska hit made her run, nevertheless, she was able to save a second break point. It would take four break points for Radwanska to get the break and once again lead 3-1.

The Pole had the pressure to consolidate the break with her serve, and she did in probably the easiest game of the set. Radwanska only made sure to make her advantage wider as she broke for the third time, giving herself the chance to serve for the first set. Two unforced errors and a double fault later put Radwanska in the awkward position of having to save three break points.

The Bulgarian denied Radwanska the chance to close the set on her serve. It was time for Pironkova to hold her serve for the first time in the set, but even after saving one set point, the Pole proved to be stronger when she hit a passing shot to take the first set 6-2, in only 46 minutes. 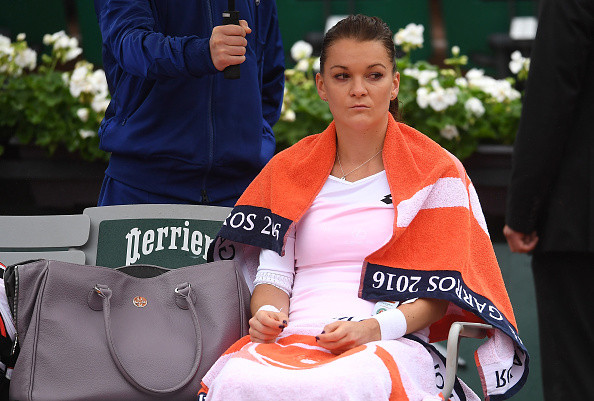 In the second set, it was Radwanska the first to cause harm, breaking Pironkova for the fifth time in a row. The Pole went on to hold her serve to get a lead of 3-0. At this point, because of the weather conditions the match was suspended. On Sunday, Radwanska seemed to have everything under control but today when the players came back on court it was Pironkova who started to stage a big comeback. After saving another break point, Pironkova proceeded to hold and get her first break of the set. The Bulgarian, who had come back inspired hold without any complications.

It was now Radwanska who was in trouble, losing the advantage she had gained two days ago with a backhand unforced error. From being three games away from losing, Pironkova got a solid hold to love to lead 5-3. The Bulgarian did the unthinkable, breaking Radwanska to take the second set. Pironkova won six games in a row to force the match to a decider.

Another rain delay didn’t stop the momentum for Pironkova who got a hold at the start of the third set. Unfortunately for Radwanska, the Bulgarian was playing solid tennis and earned the first break with a forehand volley winner. Pironkova then would hold to lead 3-0. At this point, Radwanska asked for a medical time out due a wrist issue. Four unforced errors from Radwanska gave Pironkova a two breaks lead. The Bulgarian had won ten games in a row since the match was resumed. The Pole would finally finish the winning streak of Pironkova, getting back one of the breaks after the Bulgarian hit a backhand unforced error.

With one of the breaks back, Radwanska went on to hold her serve to be 2-4. However, the Bulgarian didn’t seem to step back as she held to lead 5-2 and be one game away from the quarterfinals. A hold to love for Radwanska gave her hope to get back the other break, but a strong, inspired and confident Pironkova didn’t allow it, taking the last set 6-3. 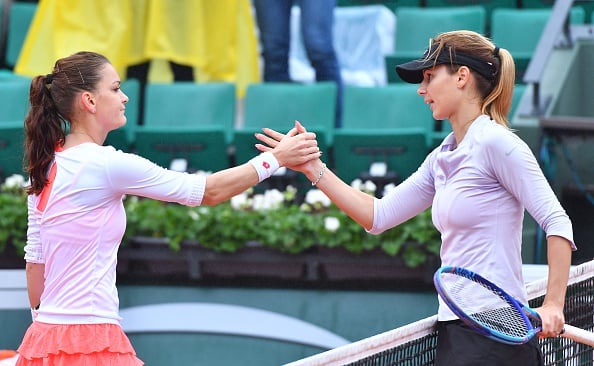 Up Next for Pironkova

On the quarterfinals, Pironkova will have to face the 2010 French Open runner-up, Samantha Stosur. This will be the sixth meeting between these players. Stosur leads the series 4-1. The last one was last year in Eastbourne which Pironkova won in two tight sets. Samantha Stosur also suffered from the rain delays. She upset the 2014 runner-up, Simona Halep in straight sets.