It was a final showdown between third seed Monica Niculescu and qualifier Elise Mertens for the Hobart International title. Niculescu was looking for her first title in Hobart while Mertens was on the hunt for her first ever title having made her first final on the WTA tour. The Belgian had been impressive all week taking out seeds while yet to drop a set and looked to continue her blistering form. For the Romanian, it wasn’t an easy route but she had a walkover over to the final after Lesia Tsurenko withdrew with a viral illness and hoped that would work to her advantage.

Despite a slow start by Mertens, the Belgian immediately regrouped and grew from strength to strength grabbing the first set 6-3. The qualifier was barely showing any signs of nerve playing for her first title and adapted extremely well to the Romanian’s style of play. Niculescu continued fighting but always came up short as Mertens eventually went on to seal a stunning 6-3, 6-1 victory for her maiden title.

Niculescu made a bright start to the match breaking to love for 2-0 but soon faded away as Mertens shrugged off her nerves and started finding her rhythm. The Belgian broke right back firing winners and almost broke again threatening the Romanian’s serve. Niculescu though held her ground as the match went on serves.

Mertens was growing in confidence as the set wore on and in the seventh game set up triple break point with some solid tennis. The Romanian only managed to salvage one of it as the Belgian broke once more to take a 4-3 lead. Mertens was also coming forward to the net to great effect and consolidated the break with ease to go 5-3 ahead.

Niculescu struggled to find her range again and a weak backhand into the net handed the Belgian with a couple of set points. Mertens once again showed her power lashing onto a short ball and finishing it with a backhand down the line to the seal the first set 6-3. 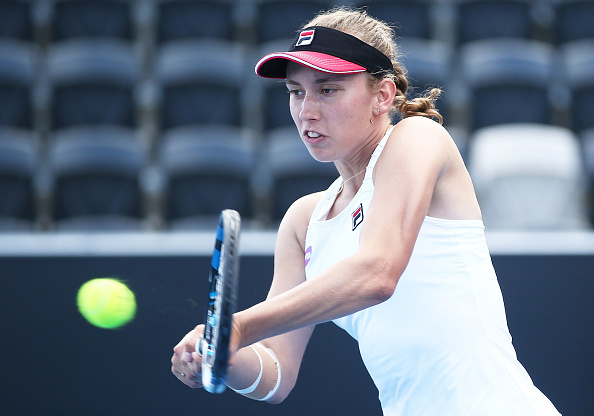 The second set began with service holds from either player as the Romanian eventually stopped the run of games. Mertens survived a marathon third game not helped by the errors and with Niculescu not taking her chances to hang on for 2-1. It was now the Romanian under pressure facing a break point after failing to defend at the net. Her backhand crosscourt winner just found the line as she rescued the break point. Mertens, however, came on top after a long grueling rally but again Niculescu was equal to it with a well-placed drop shot. The Belgian was relentless and the Romanian succumbed on her third break point allowing Mertens to break for 3-1.

Mertens was firmly in the driver’s seat extending her lead for 4-1. The Belgian could do nothing wrong coming up with a stunning winner going around the post to set up three break points. Niculescu caved in as Mertens broke to love to take a commanding 5-1 lead. The Romanian doing all she can but the Belgian’s defense barely cracked giving her double championship points. Niculescu hammered a scorching backhand winner at the end of another long rally to save of those but Mertens eventually sealed the deal for her first title.