It was a battle between two new Masters 1000 finalist in Grigor Dimitrov and Nick Kyrgios. The Aussie battled injury and weather throughout the week, playing two matches in one day at one point. The Bulgarian was strong throughout his previous rounds, entering the final without dropping a set.

The pair's only previous meeting also came at a Masters 1000, the Miami Open, where Dimitrov edged out Kyrgios in three sets. Once again, the Bulgarian got the better of the Aussie, winning 7-3, 7-5 for a maiden Masters title at the Western and Southern Open.

Both men started the match strong on serve. Kyrgios looked in fine form, hitting a second serve ace at 15-all in his opening service game. Dimitrov was tested at 2-2 as the match saw the first long rally between the two as the seven seed missed a slice to give Kyrgios 0-15. A double-fault gave Kyrgios a break opportunity, but the Bulgarian was able to hold and keep it on serve for 3-2.

The following game saw another break chance, this time for Dimitrov. A running forehand winner gave the third seed an opening at 0-30. A couple of aces from the Aussie brought it to 30-40, but back-to-back forehands into the net gave Dimitrov the break as a frustrated Kyrgios began to talk to his box. 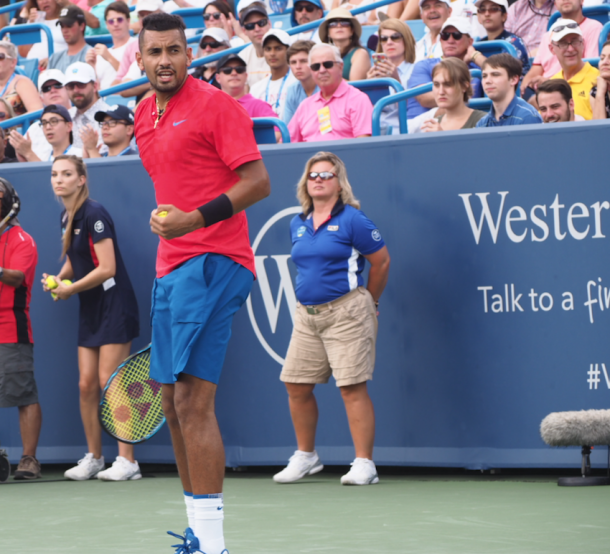 The following game, Dimitrov ran into some trouble. He double-faulted to give Kyrgios the opening at 15-30 then dumped a shot into the net for a break chance. The unseeded Aussie dumped a backhand into the net to bring it to deuce and consolidated the break for a 5-2 lead.

Dimitrov was continuing to put on a show, hitting a stab forehand winner to get it to 40-30 with Kyrgios serving to stay in the set. The Aussie held, but Dimitrov would take the set by holding to love.

There some long, thrilling rallies to start the set. In the second game, Kyrgios was putting his power on display, putting Dimitrov on the defensive as the Bulgarian was slicing. The third seed was able to turn the point around, getting up to the net and capping it off with a drop shot winner.

Just like the start of the opening set, both men were dominant on serve, holding with ease. Kyrgios once again found himself in trouble serving. The Aussie hit a ball out to set up a break chance for Dimitrov, but the Aussie took the game with a couple of big serves out wide.

In the eighth game with Dimitrov serving, the Bulgarian served which was called long and wanted to challenge it. Kyrgios told him, "It's just long, you can challenge if you want, but it's just long." The third seed did indeed challenge, and the Aussie was right as he flashed a grin in the direction of Dimitrov. Nevertheless, Dimitrov held to keep the set even.

The 11th game was the turning point of the set. Kyrgios double-faulted to give Dimitrov leads of 0-15, 15-30, and 30-40. The Aussie was getting tight, and the lack of matches over the past couple of weeks was beginning to show. An unforced error gave the Bulgarian the elusive break to serve for the match.

The Bulgarian started his bid for his first Masters title with a rousing ovation after hitting a sliding forehand winner down the line as he was jammed hitting a slice on the previous shot. After Kyrgios saved one match point, another error from the Australian gave Dimitrov his first career Masters 1000 title.

With the win, the Bulgarian guaranteed himself a top-eight seed at the US Open, thanks to the withdrawals of Stan Wawrinka and Novak Djokovic.