Team World captain John McEnroe has gone all in with massive firepower to try and fire his team to a Laver Cup victory in the competition's inaugural year.

With injuries and European dominance in the rankings, the American had to choose his squad wisely. Milos Raonic is the top-ranked player who will be in the competition for this team. The Canadian recently pulled out of the US Open so his participation in the Laver Cup is still questionable.

McEnroe has gone with three countrymen on his side as John Isner, Jack Sock, and Sam Querrey will all be joining Team World. Isner is currently the American number one and is coming off a semifinal run at the Western and Southern Open in Cincinnati. 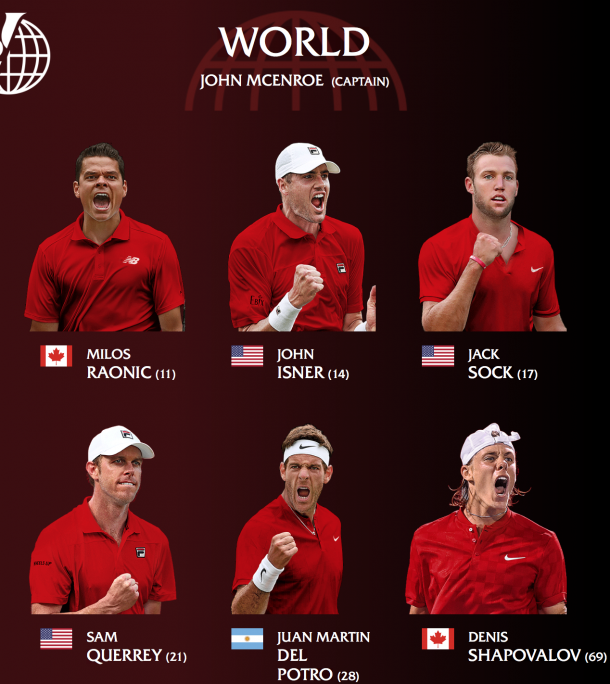 The Young and the Powerful

For his two wild card picks, McEnroe went with Olympic silver medalist Juan Martin del Potro and Canadian rising star Denis Shapovalov. The Argentine is currently just outside the top-30 in the rankings but is a dangerous opponent for any player on any given day. The former US Open champion has beaten the likes of Roger Federer and Rafael Nadal before so that experience will be crucial in a competition like this.

Shapovalov was a junior Wimbledon champion last year and truly caught the eye of the tennis world this year after a stunning Rogers Cup run. The 18-year-old made the semifinals, defeating the likes of del Potro, Nadal, and Adrian Mannarino along the way.