The US Open draw was revealed today, and a blockbuster first round showdown is on the cards as second-seeded Simona Halep faces wild card Maria Sharapova. This match will undoubtedly be on under the lights of Arthur Ashe Stadium as these two superstars go head-to-head.

The five-time Grand Slam champion has not lost to the Romanian at all in her career. They have met four times on hard courts with their first meeting in Indian Wells in 2012 before Halep had her major breakthrough. Their most recent matchup came at the 2015 WTA Championships in Singapore. Sharapova was able to take out Halep in two tight sets.

After a strong run at Wimbledon, the second seed struggled early on with the heat on the North American hard courts. She played at the Citi Open on a wild card and won her opening two matches before retiring in the third set against Ekaterina Makarova.

After that, she took off for the Rogers Cup in Montreal. The Romanian was playing some exceptional tennis, not dropping a set before her semifinal match against Elina Svitolina. Svitolina rolled the French Open finalist 6-1, 6-1 as she would eventually take the title.

The Romanian was one win away from the world number one ranking after making the final against Garbiñe Muguruza. The Spaniard steamrolled her way to a title as Halep’s wait for number one had to await.

After pulling out of the qualifying of Wimbledon, the Russian took to the Bank of the West Classic. She went on to win her opening match against American Jennifer Brady but withdrew from her second round match against Lesia Tsurenko due to a left forearm injury.

The left forearm injury continued which forced her out of the Rogers Cup and the Western and Southern Open. She has been practicing since she has arrived to the Billie Jean King National Tennis Center.

In terms of serve, the Russian by far has the better serve of the two in terms of power and placement, but it can be erratic at times as she can throw in plenty of double faults. Halep can easily place her serve in the box more often but lacks the power that Sharapova has which could allow the Russian to attack some of those serves.

Halep has the edge on groundstrokes. She is strong extremely consistent off both wings and can place the ball extremely well. The only thing the world number two lacks on her groundstrokes is power, which Sharapova has.

Movement is the category where the world number two easily has the edge over the Russian. Halep is quick around the court both laterally and forwards and backward. She can chase down any ball, forcing her opponents to hit an extra shot they are not comfortable with. She’s also slightly better at the net than the five-time Grand Slam champion.

Though Sharapova said that her preparation has not been ideal for this event, the Russian will not be afraid of this matchup. She definitely holds the mental edge of having beaten Halep in all six of their meetings which is something she could definitely go back on when looking at this matchup. 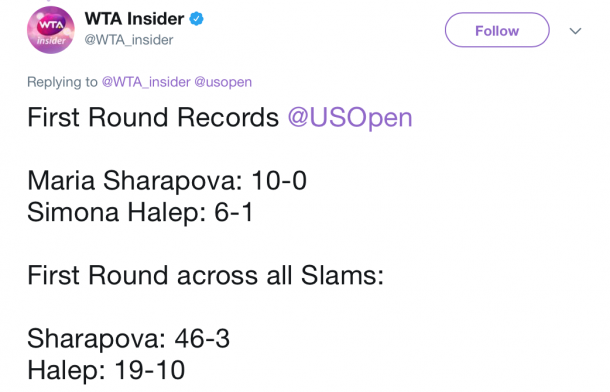 This will be a tight match to call despite Sharapova’s lack of match play. Halep once again has the pressure of trying to chase the world number one ranking, a ranking she was close to attaining three times this year, and her maiden Grand Slam title. For Sharapova, there is pressure to perform well, but not nearly the same amount of expectation that Halep has.

VAVEL Exclusive: ‘I was just a steady player. I was a top 10 for almost 10 years’ - Catching Up with Manuela Maleeva Part I 11 hours ago

Kiki Bertens has Achilles surgery, to miss start of 2021 2 days ago