The On The Line Podcast returns as Oliver and I tackle the hot topics of last week with Roger Federer and Maria Sharapova winning titles. We also discussed the WTA Finals field and preview the indoor swing as well where the Race for London heats up.

For Federer, it was a comprehensive victory and a fourth straight victory over Rafael Nadal this year. The Swiss was dominant in never facing a break point and even throwing down one of his classic service games which last less than a minute. The Swiss closed the gap on the race year-end number one to less than a 2000 points.

The Spaniard had a precautionary wrap around his right knee, an injury that hindered him in the final and will keep him out of Basel but full credits to the Swiss who wins his first tour-level event since the US Open.

Sharapova capped off a magical week in Tianjin with a title after she defeated Aryna Sabalenka in the final. The Russian looked down and out in both sets, but her experience prevailed in the end of both sets as the Belarusian faltered in the end.

Notable Picks For The Week

Both Oliver and I went with Sharapova winning back-to-back titles this week in Moscow, and that pick clearly backfired right away. The Russian was defeated by Magdalena Rybarikova in her opening match, ending her season earlier than she expected. Nick Kyrgios went out early once again, losing to Ruben Bemelmans in Antwerp, which seriously hinders the Aussie's chances of making a run for one of the last two spots in London (Marin Cilic and Grigor Dimitrov have not yet clinched their spots officially but are all but guaranteed due to the number of points they have earned on the year). Below is a table of our picks for the week 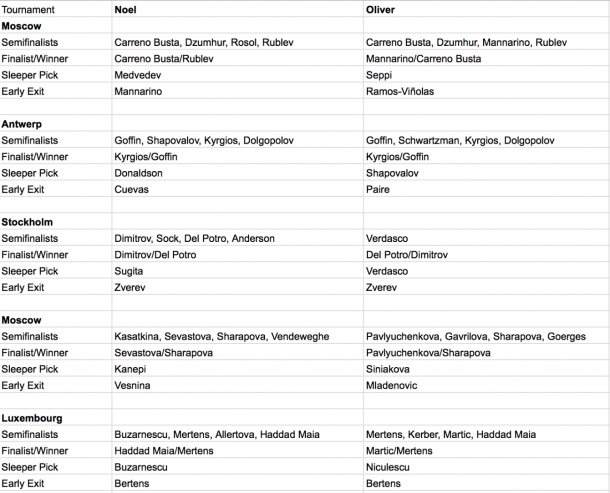