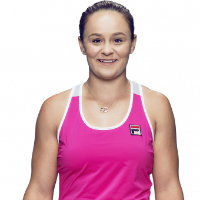 18th seed and home favorite Ashleigh Barty continued her Australian Open campaign on Thursday, with the Australian rallying from a set down to defeat the dangerous Camila Giorgi and reach the third round for the second consecutive year.

Both Barty and Giorgi came into Melbourne following positive performances at the Sydney International, with Barty reaching the final and Giorgi reaching the last four after qualifying, and it was the Italian who started the brightest. However, the Australian was able to get back on level terms and eventually ran away with it as she secured a 5-7, 6-4, 6-1 in two hours and two minutes.

Barty proves too strong and pulls through against Giorgi

This was certainly a clash of styles, with Giorgi being the far more aggressive of the two, and she was able to get off to the best start, though Barty rebounded and was eventually able to seal a fine victory.

Both women got off to a fairly start, with very few opportunities to break as both women held their opening three service games. The Italian, however, looked the most comfortable on the court, and then broke and eventually held a 5-3 lead. She was unable to serve out the set at the first time of asking, with Barty breaking back, but the Australian carelessly allowed Giorgi to break a second time and made no mistake serving for the set at this time of asking.

It was important for Barty to start the second set strongly and stop any momentum the Italian had built up, and she did that as she broke early on for a 3-1. Giorgi broke back immediately to get back on level terms, though she was starting to hit more errors and the Australian broke once again for a 5-3 lead. She failed to serve out the set, though applied the pressure on Giorgi and broke for the third time to send the match to a decider.

Barty had played a lot better in the second set than in the early stages of the match, and she continued her improved form as she broke early on and secured a 3-0 lead in the deciding set. Giorgi, who had played so well early on, was no longer striking the ball as cleanly and eventually found herself a double break down at 0-5, with Barty now using her groundstrokes to dictate. The Italian held to get herself on the scoreboard, though two aces helped seal another good victory for the 18th seed in the very next game.

After reaching the third round as a wildcard last year, Barty will be determined to go one step further, though has a very tricky clash against fellow young gun Naomi Osaka next. Should she win that, she could face world number one and top seed Simona Halep in what would be an incredibly interesting fourth round clash.

Kiki Bertens has Achilles surgery, to miss start of 2021 2 hours ago