With the first major of the year coming to an end, tour-level events for the WTA come back into full swing. There was plenty of movement in the current rankings as well as the Race to Singapore. It was a brilliant fortnight which saw plenty of drama and a first-time Slam champion.

It was a brilliant way to start Grand Slam season. Simona Halep and Caroline Wozniacki for plenty of different titles. They battled to be the first major champion of the year, to win their first-ever Grand Slam title, and the right to be world number one headed into this week.

In the end of a thriller, it was Wozniacki who came out on top in the end to win the Daphne Akhurst Memorial Cup. Wozniacki follows the likes of Li Na and Angelique Kerber as champions who came from match point down to win the Australian Open. The Dane was down 5-2, 40-15 on Jana Fett's serve as the Croatian held two match points for the upset. The second seed held her nerve and edged out the Croat to win 7-5 in the third

With the win, Wozniacki comes back to world number one for the first time in six years which is the longest time apart from the top spot in tennis history. Denisa Allertova was the biggest mover from the Australian Open, moving up 44 spots to 86.

The Czech qualified and enjoyed a run to the last 16 before losing to Elina Svitolina. Petra Martic was the second biggest mover of the week with a rise up 23 spots to 58. Martic also reached the last 16, losing to eventual semifinalist Elise Mertens.

Luksika Kumkhum moved up 22 spots to 102 after a solid third round showing which included an upset of Belinda Bencic. Naomi Osaka moved up 19 spots to 53 after her first-career second week at a Slam. Elise Mertens and Su-wei Hsieh round up the top-five movers going up 17 spots each to 20 and 71 respectively.

Mirjana-Lucic Baroni is the biggest faller of the week, moving down 37 spots to 67. The Croat was a semifinalist in Melbourne Park last year but exited in the second round this year. American Jennifer Brady fell down 30 spots to 95 after losing in the first round as she was defending fourth round points from last year.

Also defending fourth round points was Mona Barthel. The German lost in the second round to Annett Kontaveit and fell down 24 spots to 77. Alison Riske moved down 19 spots to 103 after a first round exit in Melbourne and rounding out the five biggest fallers is Kristyna Pliskova. The Czech lost in the opening round in Australia this year after reaching the third round last year. Her lost moved her down 17 spots to 78.

With the victory, Caroline Wozniacki moves to the top of the Race to Singapore standings with finalist Simona Halep trailing right behind her. Semifinalist and titlists from a week before, Angelique Kerber and Elise Mertens, find themselves just behind the top two.

Aliaksandra Sasnovich and Su-wei Hsieh round out the final eight with the Belarusian holding the tiebreaker due to having played three less tournaments. 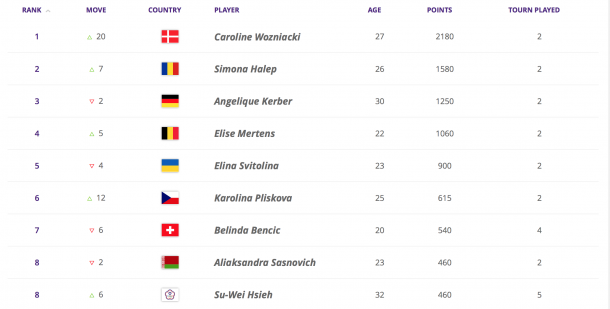 Underway are the first tour-level events since Hobart and Sydney took place. The St. Petersburg Ladies Trophy and the Taiwan Open are both being played this week. Defending St. Petersburg champion Kristina Mladenovic is looking to defend her title as well as end a rut of 15 straight losses while a new champion in Taiwan will be crowned as Elina Svitolina withdrew.