Despite it being the first-week post-Australian Open, both WTA events in St. Peterburg and Taipei had strong fields as players were looking to start off February on the right note. St. Petersburg surprisingly saw Australian Open singles champion Caroline Wozniacki take the field while Australian Open women's doubles winner and mixed doubles finalist Timea Babos took part in Taipei.

Wildcard Petra Kvitova capped off her fantastic week by winning the title, defeating defending champion Kristina Mladenovic in St. Petersburg. The Czech's powerful hitting led her to victories over Jelena Ostapenko and Julia Goerges before outclassing Mladenovic for the title.

Babos kicked off February the same way she ended January, with some silverware. In Melbourne, the Hungarian took home the women's doubles title with Kristina Mladenovic and a runner-up trophy in mixed doubles with Rohan Bopanna.

She only dropped one set en route to the title (to Dalia Jakupovic) and came from behind to knock off Kateryna Kozlova. The Ukrainian was up a break in the opening set but two breaks late on for the four seed wrapped up the first set before running away with the second set.

Though not in the top-100, a mention of 15-year-old Marta Kostyuk must be made. The Ukrainian made the third round of the Australian Open after qualifying and followed that up with a Challenger title in Burnie, Australia. The win put her inside the top-200 at 185, the youngest top-200 debutant since Michelle Larcher de Brito.

Now back into the top-100, there wasn't too many big movers this week. Taiwan Open finalist Kateryna Kozlova moved up 20 spots to 65. Babos moved up 10 spots to 35 after winning the title in Taiwan while Kvitova moved up eight spots to 21.

Other notable risers were Viktorija Golubic moving up nine spots back into the top-100, Madison Brengle moving up 10 spots to 78, and Julia Goerges who makes her top-10 debut at 10.

Caroline Wozniacki extends her lead in the Race to Singapore after having made the quarterfinals this week in St. Petersburg. There wasn't much movement amongst the top-seven but Julia Goerges and Petra Kvitova, courtesy of their respective runs in St. Petersburg, sees them tied for eighth. 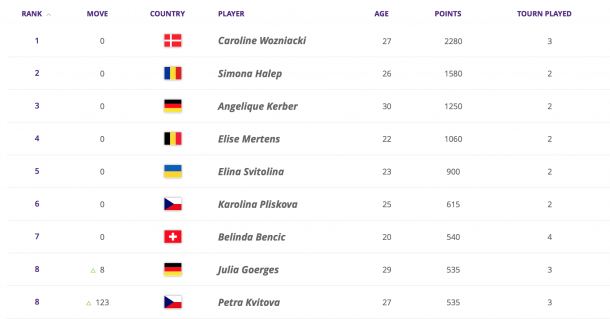 This week is an off week for the WTA with Fed Cup play beginning this weekend.