Two of the big names went crashing out on a wild Thursday at the Rogers Cup. With only a tiny bit of rain interference, the quarterfinal field was set with more than a few surprises. Here's what happened on day four at the Rogers Cup.

The final match of the day was one of the best, with old rivals Stan Wawrinka and world number one Rafael Nadal battling for over two hours. Despite his recent poor form after an injury, Wawrinka was hot, throwing everything at the top seed. Unfortunately for the Swiss, Nadal is number one for a reason, sending it all back and taking the win in two tough sets. Check out the full recap here. In the quarterfinals, Nadal will meet Marin Cilic, who dominated the 11th seed Diego Schwartzman 6-3, 6-2.

Alexander Zverev kept his strong run of form going on Thursday with a convincing win over a tired Daniil Medvedev. The young Russian had to play past midnight last night and had very little fight left for the number two seed. After a tough first few games, Zverev cruised through the last set and a half, scoring a 6-3, 6-2 victory.

The big shock of the day came in the early afternoon when 19-year-old Stefanos Tsitsipas outduelled recent Wimbledon champion Novak Djokovic in three sets. The young Greek showed absolutely no fear of the 13-time major champion, playing big from start to finish. Check out the full recap here.

American young gun Frances Tiafoe was agonizingly close to scoring a second consecutive upset. But a day after ousting Milos Raonic, he could not hang on against Grigor Dimitrov, eventually falling in three sets. The American broke first in the first and third sets, both of which he lost in tiebreaks. He also had a minibreak lead in the final set breaker, but Dimitrov roared back to reach his third consecutive quarterfinal in Toronto with a 7-6(1), 3-6, 7-6(4) victory. 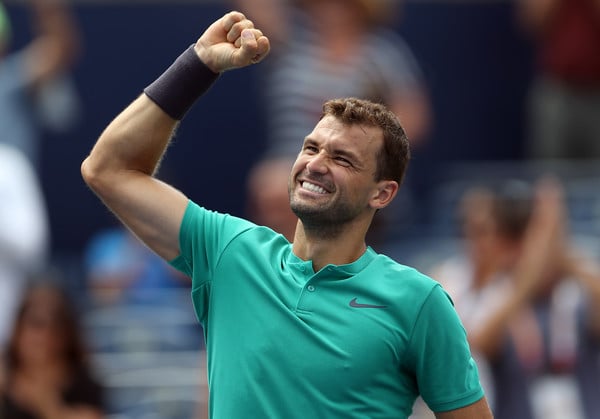 Dimitrov will meet fourth seed Kevin Anderson in the quarterfinals. Like Dimitrov, the South African also had a good record at the Canadian Open and kept it going this year, reaching his third straight quarterfinal on Canadian soil (fourth in five years) by beating qualifier Ilya Ivashka in straight sets.

The host country's dreams were dashed on Thursday evening when Canadian number one Denis Shapovalov was sent packing in straight sets by Robin Haase. It was a particularly sloppy performance from the 19-year-old, who struggled to find his targets all night. Check out the full recap here. Haase will look to reach his second straight Rogers Cup semifinal against Karen Khachanov, who caused an upset of his own by beating eighth seed John Isner in two tiebreaks.

The quarterfinals will take place tomorrow.