The final round of US Open qualifying took place Friday. 10 Americans were in action, looking to secure a place in the main draw. The other key storylines involved bordering neighbors Canada, talents of all ages such as Anastasia Potapova, Sofya Zhuk, Tommy Robredo, Nicolas Mahut, and Patty Schnyder.

In the end, 16 women and 18 men, two who were lucky losers, were officially placed in the draw as Fan Week at the Open closes out this weekend with Arthur Ashe Kids Day and open practice to the public.

No one provides drama more than former Grand Slam finalist Vera Zvonareva, who continues her comeback in qualifiers. China's Lin Zhu was down a set but leveled it at one apiece. The seeded Chinese player was up 5-2 in the deciding set and had match points before Zvonareva came charging back to win 7-5 in the third.

American Donald Young went to a third set once again, this time after losing the second. Young took a medical timeout down 0-3 in the second and looked out of it. He recharged though and managed to break Peter Polansky's serve to end the match.

Former world number five Tommy Robredo came through against fellow 36-year-old Nicolas Mahut to reach his first main draw since last year's French Open. Patty Schnyder knocked out Jessica Pegula in straight sets to book her spot in the main draw. The 39-year-old Swiss has made the quarterfinals twice in her career, coming both a decade and two decades ago.

The largest piece of history completed today was made by Liechtenstein's own Kathinka Von Deichmann. The Liechtensteiner defeated Martina Trevisan in straight sets to become the first player from Liechtenstein to qualify for the main draw of any Grand Slam tournament.

Eugenie Bouchard capped off a brilliant qualifying campaign which saw her drop a total of seven games in six sets played. Bouchard bageled Jamie Loeb in her opening set and dropped only three games in what was another dominating performance.

Felix Auger-Aliassime earned his spot in convincing fashion against another seeded opponent in Gerald Melzer, dropping only three games.

Peter Polansky and Francoise Abanda both fell in straight sets, but another piece of history was made as Polansky made it four for four this year in terms of lucky loser spots at Grand Slams. 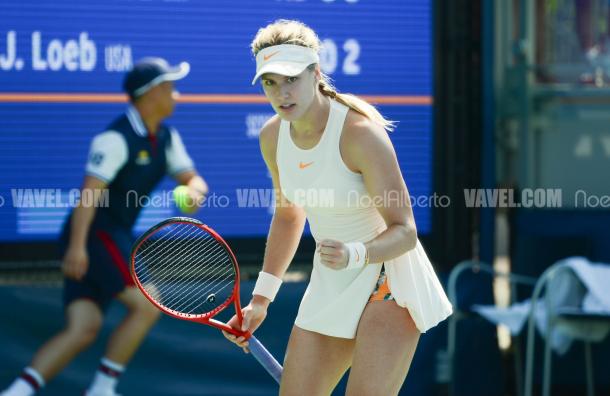 Americans Close It Out With Winning Ways

Americans went 6-4 to cap off qualifiers with new a new face in the main draw with Francesca Di Lorenzo qualifying. Familiar names in the NCAA scene but potentially, not to many others have also made it such as Colin Altamirano, Nicole Gibbs, and Danielle Lao. Mitchell Krueger was the last player to finish on day four and picked up the win joining Altamirano and Young as the American males into the main draw.