Kevin Anderson was one of two top ten players confirmed to the only ATP Tour 250 tournament held in Portugal, but the South-African had to pull out of the tournament due to his elbow injury.

On the 23rd April, Anderson announced his withdrawal from Estoril and from all the clay tournaments saying he discussed with his doctors and team and that the best decision was to take some rest and rehab his elbow for few more weeks.

The sixth player on ATP has played just a few matches this season, although he may have won most of them. To start the season, he conquered the title in the ATP Tour 250 of Pune, but right after that, he lost in the second round of the Australian Open to Frances Tiafoe. The 32 years old player didn't play Indian Wells, nevertheless, he reached the quarterfinals in Miami.

After Kevin's exit, Hugo Dellien gets a place in the main draw. The quarterfinalist at Rio Open and in São Paulo will have the opportunity to show his skills on clay this time in Estoril.

Anderson was not the only one to pull out of the tournament. Cameron Norrie did the same. Which led to a chance for Ernests Gulbis to participate in the Portuguese tournament. A chance he didn't take, because he chose to play in Munich.

Jaume Munar has also withdrawn from the Millennium Estoril Open and opened up space to Nicolas Jarry. The Chilean reached the quarterfinals in Barcelona last week, so is coming to Estoril in a great momentum.

Due to the situation of Gulbis, Guido Andreozzi gets in the draw. With all these changes, two special exempt spots are still left. One is not used and Bernard Tomic also gets in and the other one goes to Filip Krajinovic.

The qualifying draw is about to start and will oppose Pablo Cuevas to Daniel Brands, Bjorn Fratangelo to Alejandro Fokina, Simone Bolelli to Egor Gerasimov and more well-ranked players. This is the draw: 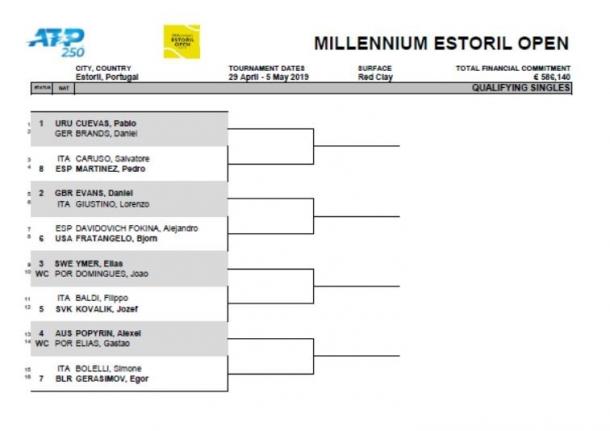