In a sunny day at the Millennium Estoril Open, it was time to know the fate of the players who are enlisted to play the main draw of the tournament. The draw ceremony had the Monte Carlo Rolex Masters finalist helping to draw the tokens.

The first seed of the tournament is Stefanos Tsitsipas, who is currently ranked eight on ATP. The Greek started the season very well, reaching the semifinal of the Australian Open and conquering the title at Open 13 Provence in Marseille. He has also reached the final in Dubai, where he lost to Roger Federer. In the last few tournaments, he fell in early rounds, winning two matches at the Miami Open, one match in Monte Carlo and Barcelona, and none in Indian Wells.

Tsitsipas will face the winner of the battle between Guido Andreozzi and Hugo Dellien. The two players have faced each other three times, all on clay, and Andreozzi leads the head to head by 2-1, although the last match - at the Rio Open, this season, where Dellien reached the quarterfinals - crowned Dellien as the winner.

The other seeded player in this quarter of the draw is Alex de Minaur. the 20 years old sensation is set to play with a qualifier and if he wins, he will face either Bernard Tomic or John Millman.

Three Aussies in the same part of the draw. Tomic leads the head to head against Millman 2-1, but they've only faced once on clay, and Millman won that match by 6-1 and 6-2. The other matches were all decided in three sets.

David Goffin, the last wildcard of the tournament, leads the second quarter of the main draw. A former ATP Tour Finals finalist, Goffin is aiming to return to his best shape. He is having a difficult start of the season as he just surpassed the quarterfinals once, in Marseille, where he lost to Tsitsipas.

The Belgian will battle against João Sousa, the defending champion, or a qualifier. The Portuguese player is defending the title at home but was drawn against a qualifier, who normally is a lowest-ranked player. Nevertheless, it will be a player with some rhythm and at least two matches played. Sousa has never won a match at the Millennium Estoril Open until the last edition, where he went through to win the title. If João wins the first match it can be a tough second round for Goffin.

Dusan Lajovic, who took is own token from the bag in the draw ceremony, is the fifth seed and is placed in this quarter of the draw. The Monte Carlo Rolex Masters finalist will fight against Leonardo Mayer for a place in the second round. They've faced three times, with the Argentine prevailing in two of them. All of the meetings were on clay, being the last one this season.

The winner of the previously mentioned match will face either Malek Jaziri or Nicolas Jarry. The two athletes have never faced each other before. Jarry reached the quarterfinal in Barcelona last week, arriving in Estoril with more rhythm than his opponent.

Pablo Carreno Busta is a former champion of the Millennium Estoril Open and has very good memories in Portugal, as he goes very deep in the draw most of the times he comes to Portugal, even in the previous tournament. Carreno Busta was given a wildcard into the main draw. The Spanish has not played many matches this season, but he is trying to get back on track. He has a win-loss record of 13-3 at the Millennium Estoril Open. His opponent is Jeremy Chardy, who leads their head to head by 2-1. The last they met was in Los Cabos, in 2016, where Carreno Busta got the win.

Taylor Fritz or a qualifier will face either Pablo or Jeremy. The North-American has reached the quarterfinals in Auckland, the round of 16 in Monte Carlo and won the title in the Newport Beach ATP Challenger Tour tournament.

Gael Monfils has been drawn into this quarter and will try to oust Pedro Sousa or Reilly Opelka. Monfils is 15-4 this season, but he played his last match in Indian Wells, in March. Sousa and Opelka never met officially in the tennis court. The Portuguese passed through the qualifying in Barcelona, last week, and lost in three sets to Jaume Munar in the first round. His best result of the season was the quarterfinals in a Challenger in Alicante. The North-American has already won an ATP Tour title this year, in New York and reached the third round in Miami coming from the qualifying.

Frances Tiafoe is one of the seeds featuring the last part of the draw. He was drawn against Mikhail Kukushkin, who he faced once, winning in four sets, at the Australian Open in 2017. Tiafoe reached the final here last season and the quarterfinals of the Australian Open and Miami Open, this season.

Yoshihito Nishioka and Mackenzie McDonald are going to fight for a place in the second round. They met each other once, in 2014, with the victory smiling to Nishioka.

Filip Krajinovic uses one of the special exempt spots and is going to face a qualifier. Krajinovic is set to play the final in Budapest tomorrow.

Fabio Fognini is the second highest-ranked player in the draw and awaits the conclusion of the match between Krajinovic and the qualifier to know who he will face. The 12th ranked on ATP won the title in Monte Carlo two weeks ago and is on his best career ranking.

Fabio Fognini is very confident and David Goffin is trying to get back on track and build some confidence. 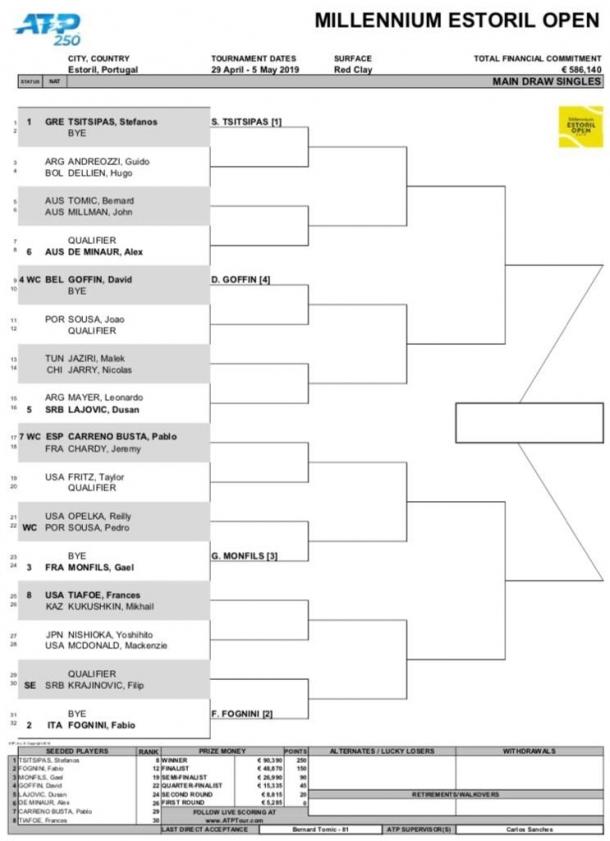