Today was the first day of the qualifying draw of the Millennium Estoril Open. There were matches in the three available courts in this day full of tie-breaks.

The match that opened the centre court was Simone Bolelli against Egor Gerasimov. The Italian defeated his opponent in two sets by the score of 6-2, 7-6(0).

The second match of the day on the Millennium Stadium was featured by Alexei Popyrin and Gastão Elias. The fourth seed ousted the Portuguese in two tough sets 7-5, 7-6(5).

João Domingues defeated Elias Ymer to close the session on this court. The match ended 6-3, 7-6(3) in two hours and three minutes.

Daniel Evans, the second seed of the qualifying draw, booked the first win of the day in Court Cascais, defeating Lorenzo Giustino in straight sets 6-3, 7-5.

One of the two three-set matches that happened during the journey was played between Salvatore Caruso and Pedro Martinez. The Italian won a tough battle applying the score of 6-3, 5-7, and 7-6(6).

Alejandro Davidovich Fokina may be the last direct acceptance to this draw, but he outlasted Bjorn Fratangelo by 6-2, 6-4 in the first match of the journey on the smallest court of the tournament.

Filippo Baldi scored a win against the fifth seed Jozef Kovalik in two hours and one minute. The match finished with the score of 4-6, 6-3, and 6-2.

Alexei Popyrin and Simone Bolelli are going to be the first ones to step on the main court, this Sunday. They will play for a place in the main draw.  They have never met before.

João Domingues, the Portuguese wildcard will face Filippo Baldi in the second match of the day in Millennium Stadium. In their two meetings, Baldi prevailed in three sets. They last met in 2018, on clay.

The first battle of the day in Court Cascais is between Daniel Evans and Alejandro Davidovich Fokina. This is going to be the first match they play against each other.

Pablo Cuevas and Salvatore Caruso will fight for a place in the main draw in the last match of the day in the second most important court in the tournament. This is their first meeting. Cuevas is a former ATP top-20 player, and Caruso is looking to pass through the qualifying of an ATP Tour tournament for the first time in one year.

The order of play: 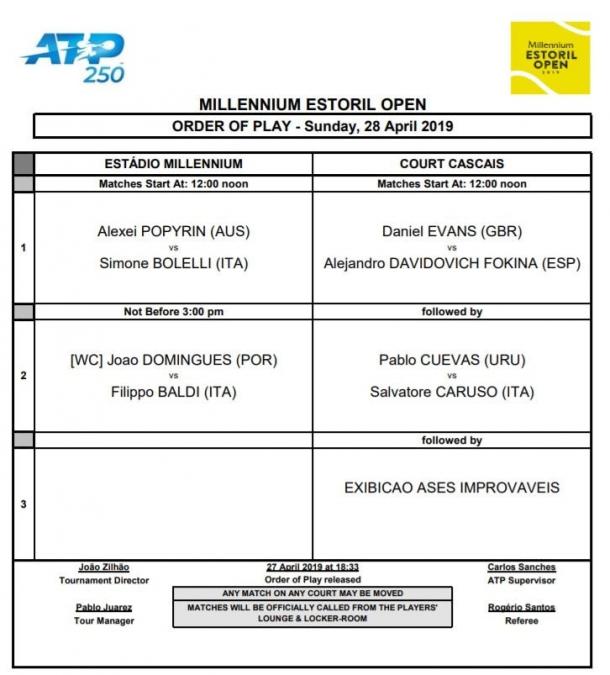 The doubles draw is already out. The first seeded team is Rajeev Ram and Joe Salisbury, who will face Guillermo Duran and Maximo Gonzalez. On their side of the draw, there is the team Marcus Daniell/Wesley Koolhof,  who are going to battle against John Millman and Yoshihito Nishioka.

Matwe Middelkoop and Ben McLachlan are the second seeds and they are going to face the home team, awarded a wildcard, Gastão Elias/Pedro Sousa. The fourth seeds, who are in this side of the draw, are the Australian Open 2019 semifinalists and US Open 2015 quarterfinalists, Leonardo Mayer and João Sousa. They are facing Santiago Gonzalez and Aisam-Ul-Haq Qureshi.

Pablo Cuevas/Jean-Julien Rojer, Dusan Lajovic/Nenad Zimonjic, Gerard Granollers/Marc Lopez, Mackenzie McDonald/Reilly Opelka are some of the teams who feature in doubles draw too. 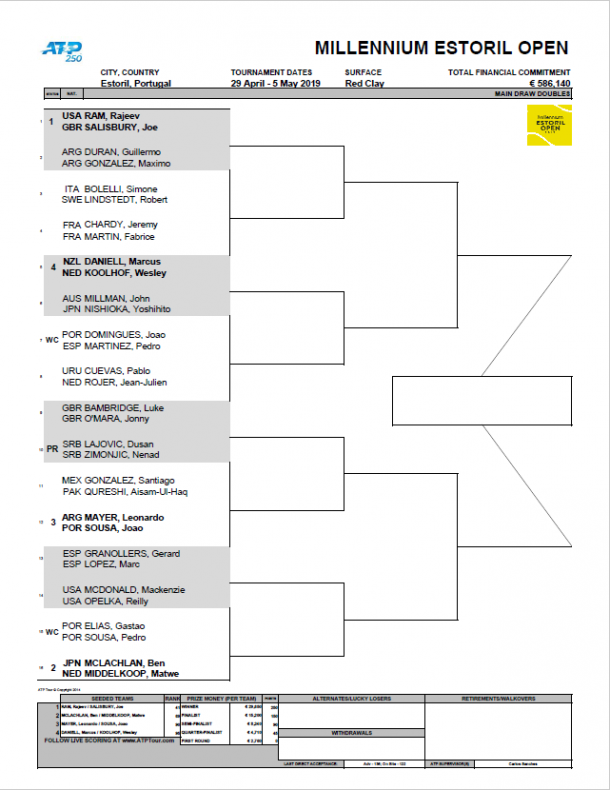