The qualifying draw of the Millennium Estoril Open is finished and the qualifiers are already known. The main draw starts on Monday and the players have been sorted.

On the first match of the day on the Millennium Stadium, Alexei Popyrin defeated Simone Bolelli. Last year's quarterfinalist after passing through the qualifying, Bolelli has an early exit this year. Popyrin defeated the Italian by the score of 2-6, 6-3, and 6-4.

Playing the second and the last match of the day on the centre court, João Domingues outlasted Filippo Baldi to book a place in the main draw. The match lasted 1h and 12 minutes and finished 6-2, 6-4. This is the third time in a row that Domingues qualifies to the Millennium Estoril Open main draw.

Alejandro Davidovich Fokina ousted Daniel Evans to grab a place in the main draw of the Portuguese tournament. Fokina was the lowest ranked player with direct acceptance into the qualifying draw and now he is already crashing into the main draw. The match finished 3-6, 6-1, and 6-4.

Closing the session on the secondary court there was Pablo Cuevas facing Salvatore Caruso. The Italian won by 6-4, 5-7, and 6-4 and he is now in the main draw of this Portuguese tournament for the second time.

In the Millennium Stadium, the matches start one hour after the matches on the other court. To open the session on the main court, at 1 pm GMT, Yoshihito Nishioka will face Mackenzie McDonald. They will meet for the first time since 2014.

Not before 3 pm, it is Reilly Opelka time to play against Pedro Sousa. They have never faced each other before.

The third match of the day is going to oppose Alex de Minaur to João Domingues, who came from playing two matches in the qualifying. The two players have never met before.

The last match of the day in this stadium is a doubles match which will be played by the teams Gonzalez/Qureshi and Mayer/Sousa, the third seeds. Mayer and Sousa reached the semifinals of the Australian Open earlier this year and Gonzalez and Qureshi have two finals and one title this season.

Guido Andreozzi and Hugo Dellien are the first ones to step up on the clay of Court Cascais. This singles match will happen at 12 pm GMT and will be a rematch of the Rio Open first round, this year.

The second battle of the day is going to oppose the teams Bambridge/O'Mara to Lajovic/Zimonjic. This is the first match of the Serbians as a team.

To close the session on Court Cascais, Simone Bolelli and Robert Lindstedt are going to face Jeremy Chardy and Fabrice Martin. 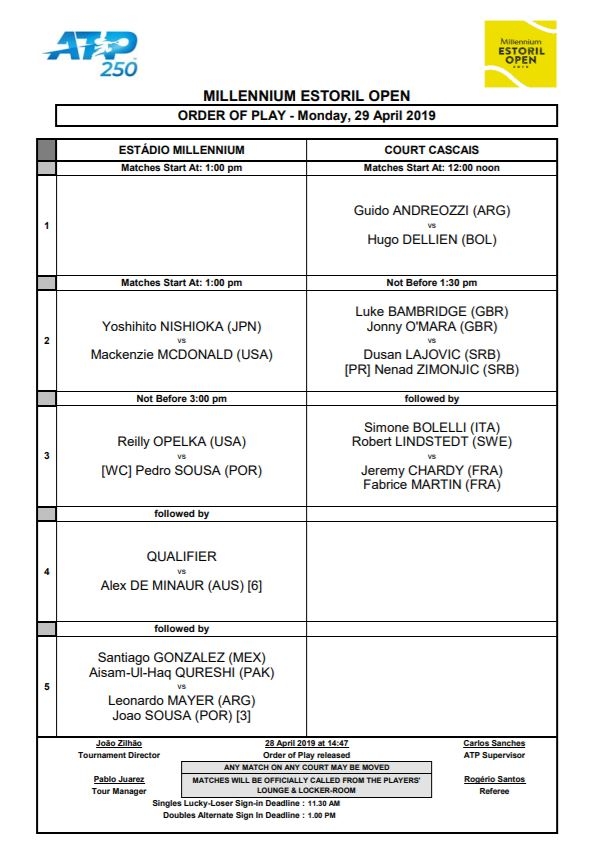 The qualifiers already know who are they going to face. Domingues will fight for a place in the second round against Alex de Minaur. Alexei Popyrin will face João Sousa. Alejandro Davidovich Fokina is going to play against Taylor Fritz, and Salvatore Caruso will meet with Filip Krajinovic, finalist this week in Budapest.

The main draw completed with the qualifiers: 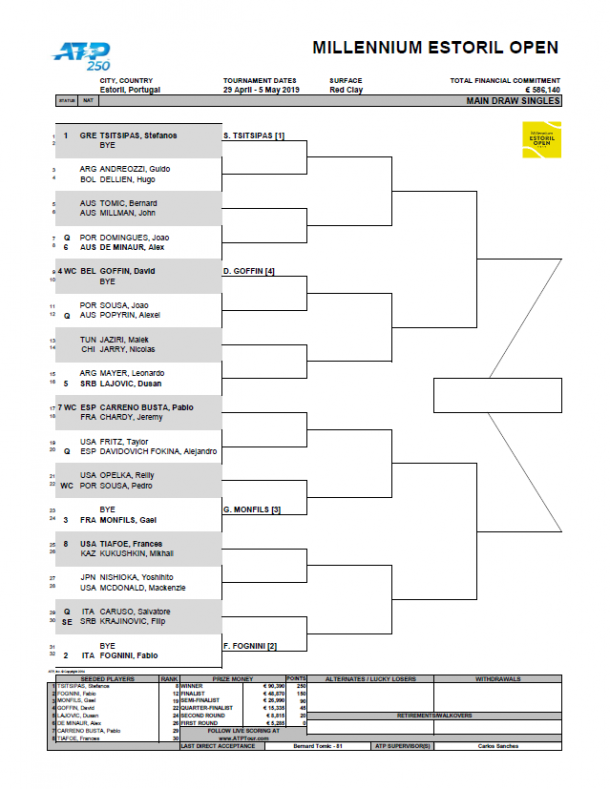