It was a long day at the Millennium Estoril Open as the matches started at 1 pm GMT and ended near 11 pm GMT. There were seven matches, four in singles matches and three in doubles.

At the Millennium Stadium, there was a duel between two lucky losers. Fabio Fognini withdrew from the tournament when he was already on site and gave his spot to Filippo Baldi. The Italian faced Pablo Cuevas in the first match of the day in the main court. Cuevas got the win in straight sets 6-2, 7-5 and will face Frances Tiafoe in the quarterfinals.

The match of the day was certainly between David Goffin and João Sousa. This was their seventh match against each other and was as enthusiastic as the previous ones. The winner of this battle was the Belgian, who prevailed by 6-3, 6-2 in one hour and twenty minutes.

The first match of the night session was played between Malek Jaziri and Leonardo Mayer. In what was the first meeting between both players, the Tunisian defeated his opponent by the score of 7-6(2), 6-1.

Frances Tiafoe, the eighth seed, and Yoshihito Nishioka faced each other for the last match of the journey on the center court. Tiafoe reached the final in the last edition and has many points to defend. It was a hard job for him to grab the victory has the players got involved in a tough three-set battle. In 2 hours and 25 minutes, the North-American won by 2-6, 6-3, 7-6(5). Nishioka was up a break 3-1 in the second set but the ranked 31st on ATP won five consecutive games to close the set. The Japanese also led by 5-3 in the tie-break but Tiafoe won four points in a row to get the win.

In the secondary court of the Millennium Estoril Open, the matches started at 2 pm GMT with the doubles match between Granollers/Lopez and Andreozzi/Dellien. The Spanish team outlasted their opponents 6-4, 7-5 in a little bit more than an hour.

Guillermo Duran and Maximo Gonzalez were the second team to step on court along with Jérémy Chardy and Fabrice Martin. The French ousted the Argentineans 4-6, 6-3, [10-7] to book a place in the semifinals. They'll face Marcus Daniell and Wesley Koolhof.

Daniell/Koolhof defeated Cuevas/Rojer in the last match of the day in Court Cascais. They won 7-6(8), 4-6, [10-7] and will play the next match on Saturday.

"It was an atypical match because it's a different week for me, I lost and I got in as a lucky loser and I don't remember that happening to me a lot of times. Today, I played against an opponent in the same situation as me..." said the former ATP titlist, adding that "...it was a very good first set. In the second I had some chances to break but he played some very good points and by luck, at the end of the set I got to surpass it and put me in the quarterfinals. That's what matters."

About his next opponent that, at the time of the statement would be either Tiafoe or Nishioka he told "They are totally different players. One is right-handed and the other one is left-handed, one is very aggressive and the other one plays in control. I have no preference. I know what I have to do apart of who is my rival..."

After his loss, the defending champion talked to the press and flattered his opponent: "I think he did a good match. He showed I he was already in the top-10. I couldn't find the solutions to try to turn the match around into my side. I couldn't play like I had planned to play, obviously David's merit for playing a good match. He was better than me."

"It was a great match from the start. I started really well the match, but it was not easy, because even if it was a 6-3, 6-2, there was a lot of rallies, it was warmer today and happily, it was not windy so you could play a great match. It was solid, every part of my game. I was very aggressive and didn't miss a lot so it was a quite solid match and I played well on the important points to break him when I had the chance. I'm happy the way I played." said the former top-10 player happy with his victory.

Goffin has been with some difficulties trying to find his way to the winning path, this season and he added: "Yeah. I didn't have a lot of good matches this year. I was struggling a little bit but I tried to come back at my best level and to have some confidence. That kind of match in a big stadium with a kind of pressure on this one is great for me to win ... it's great but I hope to continue because I need some matches and some wins."

"Yeah, I know beating him was not that easy at all, Leo has a lot of experience and is a great player. He demonstrated big tennis in the first round. Lajovic was playing unbelievable tennis last two weeks..." started the Tunisian. He concluded that "the match today was equal in the beginning, everyone taking the service and I tried to be more consistent in the game and more focused. I tried to change as well the rhythm of the game with my slice. My best shot is the forehand and it worked very well. I'm really happy to win this match...".

Frances Tiafoe finished his match very late but he made short statements saying he was happy "I'm happy. Happy to be able to play another match here.".

The matches of the last weekday of the event start at 1 pm GMT. Stefanos Tsitsipas, the first seed of the tournament, will face the qualifier João Domingues, who is in the quarterfinals of an ATP Tour tournament for the first time. The Portuguese and the Greek have met twice before. One time in the futures circuit, when Tsitsipas defeated him 6-1, 6-4, and the other one in the ATP Challenger Tour circuit, with Stefanos prevailing too, but this time by 7-6(3), 6-4, in 2017. The winner will play the semifinal against either David Goffin or Malek Jaziri.

Talking about them, these last mentioned players will follow the previous match. Goffin and Jaziri will face off for the third time and Malek won the two matches they played, one in an ITF Future in 2009 and the other one in Shenzhen in 2016.

Gael Monfils and Alejandro Davidovich Fokina will start the night session of the journey, The third seed and the teenager have never faced each other before. Fokina is a qualifier and will try to make his first ATP Tour semifinals ever, while 'La Monf' is making his return into the circuit after being more than one month out due to injury.

Frances Tiafoe and Pablo Cuevas are going to fight to fill the last semifinalist spot. They have never met before. Cuevas got a new chance in the event as a lucky loser and Tiafoe reached the final here last season. The winner is going to face Monfils or Fokina for a place in the Sunday final. 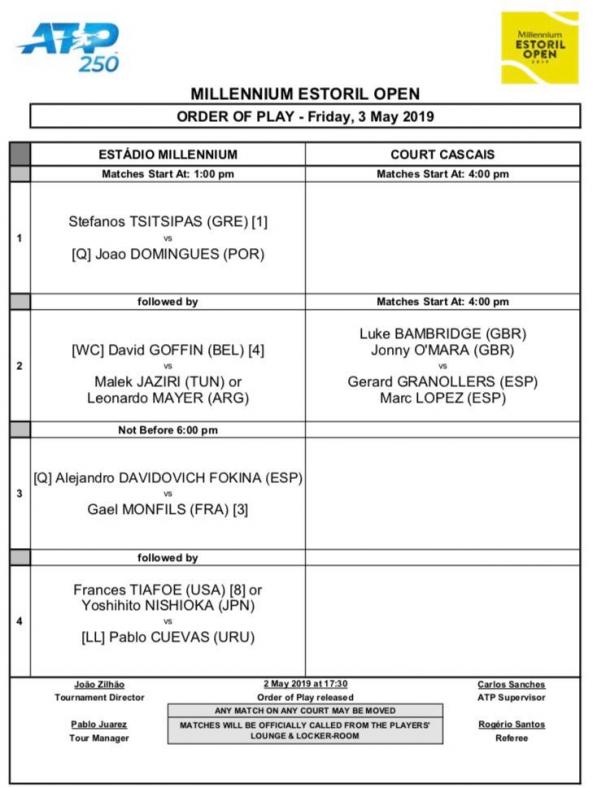