NOR1
END14 hours ago

In one of the hottest days of the week, five matches took place at the Millennium Estoril Open. In the singles matches the semifinalists had been set and in doubles, one of the teams which are going to attend the final got decided.

The first seed Stefanos Tsitsipas was the first to step on the main court this Friday alongside João Domingues. The Greek athlete had to fight really hard to defeat the Portuguese qualifier and ATP ranked 214th. It took 1 hour and 46 minutes for the top-10 player to oust the lower-ranked one in two sets by 7-6(3), 6-4. Domingues broke Tsitsipas service in the third game of the first set but when he was serving for the set at 5-4, the higher-ranked player broke it back. In the second set, the Portuguese lost his serve when Stefanos made the 4-3. He broke back right away but wasn't able to close his service game and, even though he had a point to 5-4 after saving two break points, the Greek broke and served it out.

David Goffin and Malek Jaziri fought for a place in the semifinals in the second match of the day. The Belgian started really well getting an early break but the Jaziri recovered and managed to be up by 5-4. Nevertheless, Goffin was able to break Jaziri's serve and close the set 6-4. Leading 5-2 in the second set, David couldn't stop Malek to win 4 games in a row and be up 6-5. The set went to a tie-break and it got closed 7-6 (4) to the older player. The last set went to Goffin. He took an early lead and closed it 6-2 on his opponent serve. The final score was 4-6, 7-6(4), 6-2 and he will now face Stefanos Tsitsipas.

To begin the night session, Alejandro Davidovich Fokina outlasted Gael Monfils, the third seed of the tournament. This is the first time Fokina reaches an ATP Tour semifinal and it happens it the same week he wins his first ATP Tour match. The Spanish, who was awarded a wildcard to the Mutua Madrid Open defeated the former ATP top-10 in three tough sets 6-7(2), 7-5, 6-4.

Pablo Cuevas was the last winner of the day by defeating last season's finalist Frances Tiafoe in a very long match which ended at 11:15 pm GMT. The match lasted two hours and six minutes and finished with a very unequal scoreboard of 6-0, 6-7(5), 6-2. Cuevas is in his fourth semifinal of the season, the third at ATP level after Cordoba and Rio. All of them were on clay. The Uruguayan will play against Fokina to see who has the chance to fight for the title on Sunday.

There was only one match in the second court of the tournament. It was the semifinal between Bambridge/O'Mara and Granollers/Lopez. The British team won in two tight sets 6-4, 7-5 and will face either Martin/Chardy or Koolhof/Daniell in the final.

Tomorrow is semifinals day in Estoril. There will only be matches in Stadium Millennium.

Jeremy Chardy and Fabrice Martin are going to face Marcus Daniell and Wesley Koolhof, the fourth seeds. The teams have never faced each other before. Chardy/Martin have already conquered one title this season, in Marseille, and Daniell/Koolhof won the title in Brisbane to start the season and came from reaching the final in Budapest last week. The match starts at 1 pm GMT.

Not before 3 pm GMT it is time for Stefanos Tsitsipas and David Goffin play for a spot in the final. This will be their sixth meeting but only the second one on clay. They met in Marseille this season and Tsitsipas got the win in two sets 7-6(1), 6-2, however, in their only meeting in clay, Goffin won 7-6(4), 7-5. The Greek leads the overall head-to-head 3-2.

The lucky loser Pablo Cuevas and the qualifier Alejandro Davidovich Fokina are going to duel not before 4:30 pm GMT. It is their first meeting. Cuevas is going to is fourth semifinal of the season and Fokina to the third, being the previous ones on the ATP Challenger Tour. The winner will earn a place in Sunday's final. 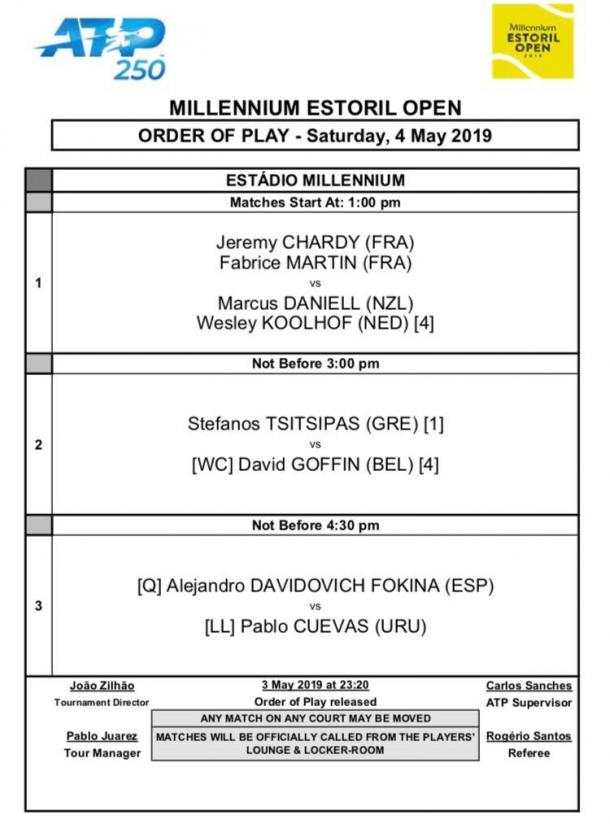 French Open Qualifiers Day 1: What To Watch For 4 hours ago