It was a big day at the Millennium Estoril Open. With the seats all filled, the finalists were set. The journey provided two singles matches and one doubles match, all of them were semifinals.

Stefanos Tsitipas beat David Goffin in the first semifinal of the day. In a very tight match which lasted 2 hours and 18 minutes, the Greek player won by 3-6, 6-4, 6-4 to book a place in his third final of the year. The crowd was cheering for both players as they wanted a tight match. There were a lot of breaks of serve but in the end, it was the Greek who prevailed.

The last match of the day was played between Pablo Cuevas and Alejandro Davidovich Fokina - a lucky loser and a qualifier. The most-experienced player got the win but not without Fokina giving him troubles first. Fokina won the first set 6-3 after being down by a break 1-3. He won five consecutive games and faced a lot of breakpoints when serving for the set. In the second set, it was time for Cuevas to win four games in a row when the set was leveled at two games all. He won the set 6-2. In the last set, the intensity of the match and the weight of the last matches Alejandro had played showed up and the Spanish started feeling cramps. After breaking each other serves four times to begin the set, Cuevas won four consecutive games and closed the match 3-6, 6-2, 6-2 in 1 hour and 53 minutes. He is going to face Stefanos Tsitsipas in the final, this Sunday.

Sunday it will be the last day of the Millennium Estoril Open 2019. After nine days of tennis, a lot of players gave their best but only six got the chance to be on the court this Sunday.

The doubles final start at 1 pm GMT. Jeremy Chardy and Fabrice Martin are going to fight for the title against Luke Bambridge and Jonny O'Mara. The teams have never met before. Chardy/Martin have a win-loss record of 9-3 this season, winning the title in Marseille. Apart from it, they reached the second round of the Australian Open and the quarterfinals in Houston. The team lost in Montpellier first round.

Bambridge/O'Mara started the season reaching the final in Pune, but lost in the first round of Sydney. At the Happy Slam, they reached the second round, as their rivals did, and after that, they lost in the semifinals in Montpellier. New York and Rio came next and they were defeated in the quarterfinals in both. São Paulo was where they reached another final but it was not the only one because they reached the final in Sarasota in an ATP Challenger Tour event. They were quarterfinalists in Budapest last week and have a win-loss record of 18-10 this season.

The singles final will take place not before 3:30 pm GMT and will oppose Stefanos Tsitsipas, a young player on the top-10, to Pablo Cuevas, a 33 years old player who has six ATP Tour titles.

Tsitsipas and Cuevas have played against each other once before and it was in 2017 in Antwerp, on hard court. The match ended 6-1, 6-4 to the Greek player. This will be Tsitsipas first final in Estoril. He reached the semifinals here last season. Stefanos has reached the semifinals of the Australian Open this year and he is currently ranked tenth on ATP and can climb to the ninth spot with a win.

Pablo reached his last ATP Tour final in 2017, but on an ATP Challenger Tour event two weeks prior to arriving in Estoril. He already lost in singles this week in Estoril, as he is a lucky loser. He lost to Salvatore Caruso in the last round of the qualifying and got the revenge in the first round of the main draw. Cuevas has a win-loss record of 24-11 this year, while Tsitsipas is 23-11. He has only one less win than Cuevas. 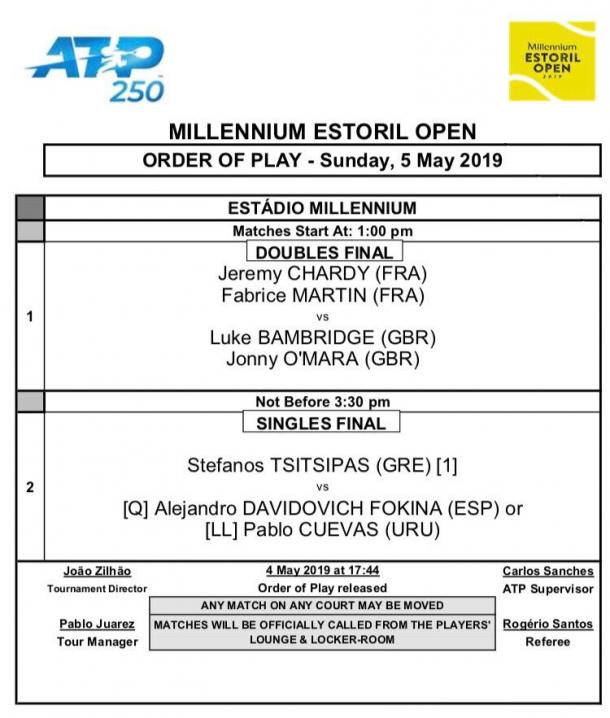