World number one Naomi Osaka overcame a huge scare to reach the second round at the French Open, with the Japanese surviving a bagel first set and twice having to break to stay in the match to seal a hard-fought first round victory against world number 90 Anna Karolina Schmiedlova.

Osaka came into this match with a 14-match win streak Grand Slams, having won at the US Open and Australian Open, though was erratic early on, not holding serve as Schmiedlova, a former top 30 player, took the opening set without having to do too much.

The Slovak rallied from an early second set deficit to twice serve for the match, at 5-4 and 6-5, though could not force a match point and was broken both times, with the top seed eventually claiming the second set and rolling through the decider, claiming a 0-6, 7-6(4), 6-1 victory in an hour and 54 minutes to progress.

Schmiedlova won just two games against the world number 160 last week in Strasbourg, though was incredibly close to the upset of the tournament here after remaining solid through the second and third sets

Osaka started poorly, with a handful of errors seeing her broken in the opening game, and Schmiedlova looked very comfortable as she worked her way into the match, consolidating and taking advantage of more mistakes from the world number one, with another break of serve helping the Slovak build a 4-0 lead in one of the biggest matches of her career. Schmiedlova in fact hit no winners in the opening set, but so many mistakes flew off Osaka’s racket she was able to break for a third time, and calmly served out the first set after just 23 minutes. 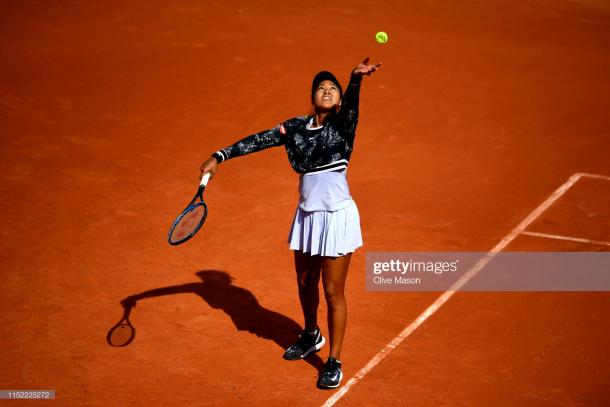 After such a poor set, Osaka needed a strong start to the second, and got just that, striking the ball more cleanly as she broke early on and consolidated for a 3-0 lead. However, a brief rain delay seemed to halt her rhythm, and the Slovak was able to force her way back to 3-3. Too many errors were once again flowing of the top seed’s racket, and Schmiedlova broke at 4-4 to serve for victory. Osaka produced some of her best tennis of match to break back, only to lose serve again, though the world number one converted a fourth break point, and took control of the breaker early on, taking a third set point to send the match to a decider.

Unlike the previous two sets, the decider saw both women hold their opening services games, though it was Osaka who broke through first, breaking for a 2-1 lead and consolidating to put herself just three games from victory. After having been so close to victory, Schmiedlova was now struggling to reach Osaka’s level, and the Japanese broke for a second time to go 4-1 up. The world number one consolidated comfortably, and then broke to love to seal a hard-fought win.

Things will not get any easier for Osaka next, with a clash against two-time Grand Slam winner and former world number one Victoria Azarenka facing her in round two.