Daniil Medvedev staved off fatigue to cap off a memorable three weeks in North America, defeating David Goffin, 7-6(3), 6-4, to capture the first Masters 1000 crown of his career at the Western & Southern Open.

Blasting second serves that peaked at 125mph, not much about the Russian’s game is orthodox and it was fitting that after a second set in which he failed to drop a single point on serve, he dug himself a 15-40 hole in a hitherto career-defining game.

Summoning energy that few believe he still possessed, he staved off Goffin’s advances to clinch a maiden Masters crown. His exertions over the last three weeks have catapulted him inside the top five of the ATP rankings. 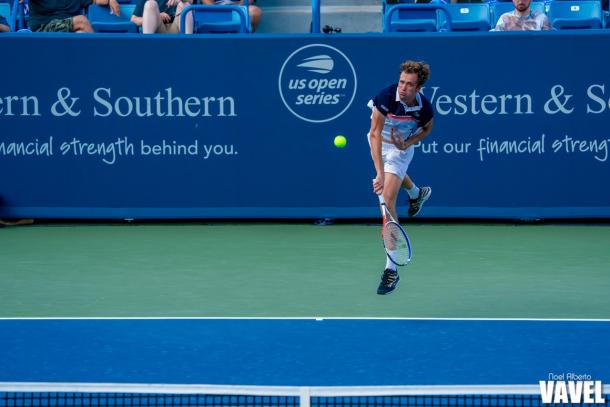 He will jet off to New York brimming with confidence, but cautious of the rising expectations. Only Nick Kyrgios and Rafael Nadal have got the better of the Russian since his North American hard court swing began in Washington D.C.

Novak Djokovic, the reigning champion in Cincinnati, was dispatched from a set down in the semi-finals on Saturday evening and Medvedev dug into the same arsenal utilised in the defeat of the world number one. The Russian appeared out of ideas midway through the second set against the Serbian, before redlining his game with a combination of high-risk second serves and penetrating groundstrokes. Djokovic admitted to being caught off guard in his post-match interview.

Goffin arrived into his first Masters 1000 final by virtue of a commanding semi-final win over Richard Gasquet – aided by the withdrawal of Nadal in the bottom half – and he began the contest striking the ball like he has done since the French Open in May: clean and effective.

The pair traded early breaks, a tie-break required to separate them, and it was a shootout that went against the flow of the previous twelve games. Neither player was able to hold serve until Medvedev motored into a 6-2 lead, snatching the set thanks to a double fault from the Belgian.

It was to prove a costly missed opportunity. Medvedev, although adept at concealing his emotions, was feeling the effects of a late finish on Saturday evening – and the previous three weeks – and the relief of taking the opening set carried into the start of set two, with the Russian breaking almost immediately.

After successive heartbreaks in Washington D.C. and Montreal without winning a set, Medvedev was now in a commanding position. There was no relenting. Until a fraught closing service game that threatened to derail a historic period from the 23-year-old.