Federer, 38, still holds the number 3 spot on the ATP Rankings, whilst Djokovic and Nadal occupy the top two spots and have won all of the last 7 majors between the two of them. The most recent winner of a slam outside these three is Stan Wawrinka, who at the current age of 34 himself, defeated Djokovic in the 2016 US Open final. 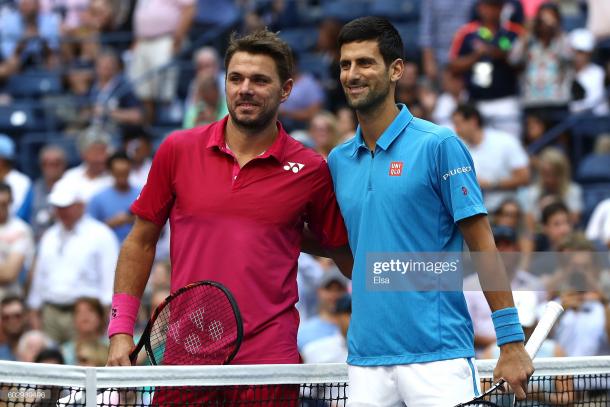 There’s been so much promise over the last few years of new and upcoming players who have seemed capable of breaking into the top 3, the likes of Alexander Zverev winning various masters 1000 events, as well as 21 year-old nextgen star Stefanos Tsitsipas challenging and defeating Nadal and Federer earlier this year, but no-one has been able to put on a consistent run of quality to challenge the stronghold these veterans still retain on the men’s side of the game.

The tennis world is constantly asking, how much longer will these three dominate the game? Who will challenge in the slams and break the streak wins the big three have. Pushing on into the 2020 season, it doesn’t look, at the moment, like anything will change for next season. All the big three won their first slams at a very young age, Nadal being 19 when he won his first Roland Garros title, but there is no sign of that happening with today’s younger players.

So it all boils down to the question, what do the so-called next-gen players lack which will help them challenge consistently and defeat the big three at the highest level? We’ve seen that over best of three sets it is very possible and has been done, with there being numerous different names on the trophies of all the masters 1000 tournaments in recent years. However, we’ve seen the likes Alexander Zverev be successful on numerous occasions at lower level matches, but seems
incapable of reaching the latter stages of the slams, and shows a lack of the mental strength needed to grind out two weeks at a best of 5 sets level.

It’s all about consistency, and the lack of it from each player ranked number 4 in the world and lower. What has always separated the big three, and Andy Murray before his hip injury in 2017, was the determination to keep fighting and keep winning, something which seems lacklustre in some of the younger players. Take Nick Kyrgios for example, a hugely gifted and talented player, who out of everyone else on the tour seems the strongest and has shown on many occasions that he has the firepower necessary to defeat the best players, but his attitude towards the game and his lack of desire to succeed within the sport means that he rarely puts a run of wins together.

I think that’s the case for a lot of players on the tour. Trickery and tomfoolery is always entertaining to watch, in a sport which could probably do with more of an entertainment factor to appeal to a wider audience. However, the only players who show the grit, are the most focused, determined and hungry for titles are the big three, at least that’s how it seems anyway. 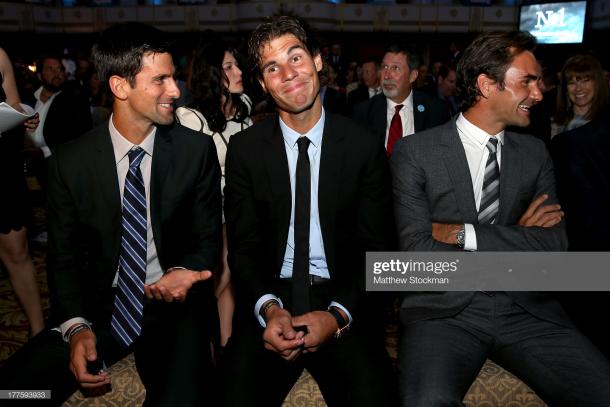 A level of respect towards Federer, Djokovic and Nadal of course is 100% guaranteed and necessary, given what they’ve done for the sport over the last 15 or so years. However, it’s possible that perhaps the lack of support given to other players on the tour may affect how they
play. Anytime a player comes up against Nadal or in particular Roger Federer, the crowd are always largely on their side, and that could affect the opposing player in a way that sets in a lack of belief that they can defeat them. I've never seen a more one-sided match in terms of support as I saw during the 2017 Miami masters 1000 semi-final between Federer and Kyrgios, where after every winning point for the Swiss there was a huge roar, even if it came from an unforced error
from the Australian.

With this in mind, it can be said that a major reason for why no other player has broken into the top three is due to a huge amount of respect for the players, to a point where the winning mentality just
isn’t in the minds of some of these lower ranked, but upcoming and young guys. It would be foolish to suggest that the big three are preventing other players from flourishing, because no-one will get
bored of watching arguably the best players to have played the sport play week in week out.

Each of the big three are pushing their mid to late 30s, and a 21 year old struggles to outrun and out grind Roger Federer in a best of three set match? It either shows the absolute quality that Federer possesses which may never be matched again in the history of the sport, or there is something not right with the younger generation in terms of the winning mentality needed to win the biggest events, or perhaps just a mix of both.

Granted, we are gradually seeing different names appear more frequently in the latter stages of tournaments, with the likes of Tsitsipas, Matteo Berretini, Lucas Pouille and Daniil Medvedev all making thei first appearance in the semi-finals of a Grand Slam event in 2019, particularly Medvedev who had an incredible summer on the American hard courts. However, no player was able to break the sequence of victories for Nadal and Djokovic.

It really makes you think about how lucky we are to witness this current generation of tennis players, and whether or not we'll see the quality from the big three again for such an extensive period of time. The dominance from these three players makes it all the more interesting in seeing who will break through one day and break the stronghold.