n routeDay 3 of the Adelaide International wrapped up with six matches on the second round schedule with the winners joining the top two seeds, Ashleigh Barty and Simona Halep, in the quarterfinals. Fourth seed Belinda Bencic and sixth seed Aryna Sabalenka were the highest seeds to move on.

The Swiss needed nearly two hours to see off the German 7-6 (4), 7-6 (6) to claim a quarterfinal berth. Bencic was made to come from behind in the opening set, recovering from a 5-3 deficit and failed to serve out the match twice in the second set before closing it out when Goerges missed on a smash on match point.

"It's always really tight because she's a player that always serves really big", she commented afterwards. "It puts a lot of pressure on you, your service games but also your return games. it's about the breaks, the important points. To be honest, I don't think I deserved to win the first set. Maybe I was a little bit lucky, but I just tried to hang in there and bring every ball back." 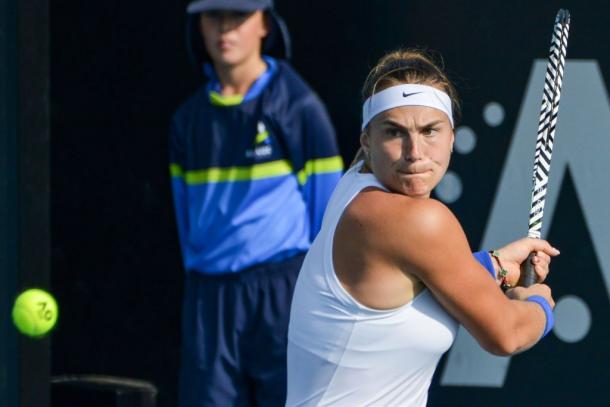 Sabalenka, who escaped an upset in the first round against Su-wei Hsieh, had a fairly easy time with Bernarda Pera, claiming a 7-6 (4), 6-2 win to set up a blockbuster quarterfinal matchup with Halep. The Belarussian won 80 percent of her first serve points and converted on three of eight break chances.

Two seeds fell as Danielle Collins routed seventh seed Sofia Kenin 6-3, 6-1 in an all-American showdown. After her win, the 27-year old, into her second consecutive Premier-level quarterfinal of 2020, said "today was a bit of a struggle for me. I've been pretty sick and dealing with some stuff", but also noted that "I think I dealt with the adversity pretty well" in advancing to face Bencic in the last eight.

Ninth seed Angelique Kerber was forced to retire down 6-3, 2-0 to Dayana Yastremska. After breaking to open the match, the German was overpowered by the 19-year old, who won eight of the last ten games and produced 11 winners in the first set. "I couldn't notice from the beginning that [Kerber] was injured because she played really well", said Yastremska. "I hope she can recover very well before the Australian Open."

Vondrosuova, Vekic round out winners on Tuesday

Eighth seed Marketa Vondrousova continued her sterling play in her return from wrist surgery as she blasted Arina Rodionova 6-0, 6-0. The Czech committed five double faults, but took six of eight break chances and allowed only 24 total points to the Aussie qualifier to set up a rematch of the French Open final with Barty.

Donna Vekic reached the quarterfinals with a 2-6, 7-5, 6-1 victory over Maria Sakkari. The Croatian only got 59 percent of her first serves in, but was able to compensate by winning 72 percent of her second serve points en route to setting up a quarterfinal meeting with Yastremska, who defeated her in the round robin stage of the WTA Elite Trophy.