AJordan Thompson stunned top seed John Isner to reach the New York Open quarterfinals. Following the match, he commented on a number of topics including the court speed, playing a baseliner after facing two big servers and how his gameplan will change going forward.

Thompson "wanted to get into as many baseline exchanges as possible"

Thompson didn't drop serve in the match, but he said "I don't necessarily think it was the serve. I just tried to make a lot of first serves just so I could get in the baseline rallies. The court is quite slow. I wanted to get as many baseline exchanges as possible.

"In some patches I didn't serve my best, but I managed to get out of trouble from the baseline so [i'm] just trying to serve smart and use the next shot to get on top of the rally."

Thompson said Isner "has a great forehand - he can wind up on it and get a lot of power. You probably don't want to let him hit too many forehands, so yeah I was trying to pin him in that backhand corner, but he kinda hit every shot there so [I] just tried to play it pretty smart."

Aussie turns the tables on American after three prior defeats

After defeating Ivo Karlovic in the first round, the Aussie took out the American for the first time. "That's the first time i've beaten John", he said. "I was down 3-0 in head-to-head, so I was lucky to get a win there. I think he had one break point in the whole match, but I have played Ivo four times and we are two and two, as well, but I've won the last two times so maybe playing Ivo the other day warmed me up for playing John."

Courts "are slower than last year", Thompson enjoys playing on them

The Aussie also commented on how the courts are playing. "Yeah, the courts are definitely playing slower than last year", he said. "It doesn't shoot off as much. I don't know what it is - it could be the balls. But i'm just trying to play tennis and just get on with the job. 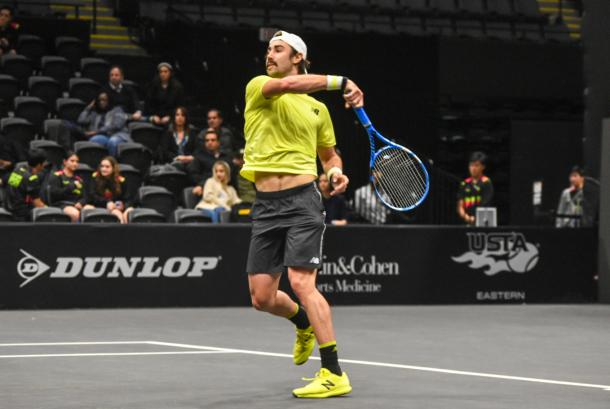 "Something about this court - it's just different. I think some guys find it tough to move on, [but] I think movement is probably the best part of my game. I've been moving pretty well out there running down a lot of balls, so I don't mind playing here at all."

Seppi up next for streaking Aussie

After facing two huge servers, Thompson squares off against Andreas Seppi, a player whose game style is very much similar to his own. "It's a tough one - i've never done it before. I've never played someone 6'10" or 6'11" and then to play someone 6 foot [is] going to be different.

"I'd have to say I have to play a lot more aggressive than I have been. I've been trying to get into long baseline exchanges against these big guys, so i'll probably have to try and do something different to win more points rather than rely on just my wheels to win points."