The match of the tournament at the Top Seed Open took place between Coco Gauff and Aryna Sabalenka with the 16-year-old American prevailing over the second-seeded Belarusian 7-6 (3), 4-6, 6-4 in two hours, 48 minutes.

Gauff notched her second Top 20 win of the year, the first being at the Australian Open when she ended Naomi Osaka's title defense. She advances to face eighth seed Ons Jabeur in the quarterfinals.

In this highly anticipated matchup, it was Sabalenka who had two break chances in the first game of the match, but a pair of unforced errors erased the opportunities. Breaks were exchanged midway through the set and Gauff blistered a forehand to set up break point in the sixth game with a net cord aiding the American in the next game to go ahead 4-2.

A subsequent hold made it 5-2, but the Belarusian climbed back into the set, breaking when Gauff sent a forehand long to get back on serve. The second seed served for the set at 6-5 on a run of four games in a row, but the 16-year old broke back to force a tiebreaker.

Sabalenka's forehand deserted her to open the breaker as she committed a pair of unforced errors to fall behind 2-0. The deficit would eventually become 5-0 as Gauff was seemingly in control only to see the second seed win four of the next five points to cut the lead to 6-4, saving a set point. At the second time of asking, Gauff struck a forehand winner as she moved up to net and took a one-set lead.

Sabalenka was on the defensive to begin the second set, facing a break point in the opening game, fighting off the opportunity with a good serve to eventually hold. The fourth game saw the world number 11 draw an error from Gauff from a heavy backhand to claim a 3-1 edge. She extended the lead to 5-2 and served for the set a game later.

At 15-40, Sabalenka made a mess of a two-hand backhand volley to hand the break back to the American, but she rebounded straightaway and facing triple set point, Gauff fired a forehand into the net as the second seed leveled the match at one set all.

Gauff finishes strong to pull off the upset

At 30-30 in the final set, Sabalenka double-faulted to bring up break point and a backhand error gave Gauff the early advantage. A hold made it 2-0, but the lead was soon gone as three straight breaks made the score 3-3. A 12-point, four deuce game saw the second seed sneak back in front 4-3, saving a break point in the process.

A quick hold by the American made it 4-4 and another backhand miss by Sabalenka brought up triple break point in the next game. Saving the first, she was helpless as the 16-year old whistled a forehand down the line to break. Serving for the match, she breezed through the game, closing it out with one last forehand winner. 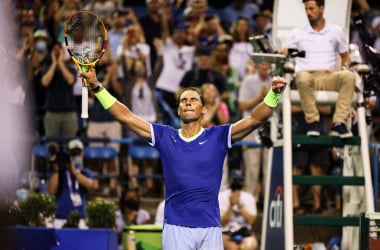