The women's draw at the US Open was blown wide open as top seed Karolina Pliskova crashed out to world number 50 Caroline Garcia with the Frenchwoman prevailing 6-1, 7-6 (2) in their second round match on Louis Armstrong Stadium in an hour, 35 minutes.

Garcia, who had 30 winners on the afternoon, raced out to a set and a break lead only to watch the Czech rally and she held two set points at 6-5, but the world number saved those to force a tiebreaker, which she dominated for her fourth win in seven career meetings against Pliskova.

The Pliskova serve is one of the biggest weapons in women's tennis, but Garcia had little difficulty with it early on, a measured cross court forehand winner giving the Frenchwoman an early break for a 2-0 lead.She saved two break points in the next game and shockingly broke the Czech again after some aggressive groundstrokes forced an error from the top seed.

The lead was extended to 5-0 before Pliskova finally got on the board with her first hold of the match. Serving for the set, Garcia was pushed to deuce, but watched as the Czech committed consecutive unforced errors to claim an opening set in which she struck 15 winners to Pliskova's one.

Garcia kept up her incredible level of play, breaking Pliskova to open the second set. The Czech was getting to deuce, but couldn't generate a break chance as the Frenchwoman maintained her advantage. Finally, the top seed broke as Garcia sailed a backhand over the baseline to level the set at 4-4.

The key moment in the match was Garcia saving two set points as Pliskova misfired on the return both times. Each woman held to force the set to a tiebreak where early minibreaks were exchanged with the world number 50 emerging with a 2-1 lead. Another minibreak was achieved after Garcia's forehand was judged to have hit the line following a review. 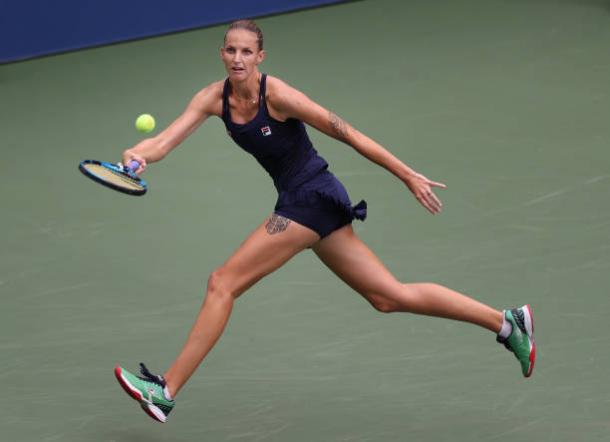 The lead was stretched to 6-2 and on match point, a powerful forehand by Garcia forced a backhand into the bottom of the net by Pliskova, securing a place in the third round, handing the top seed its earliest loss in Flushing Meadows in a dozen years.