Thank you for following the broadcast of the match between Spaniard Rafa Nadal and American Denis Kudla.
11:34 PM3 months ago

Nadal failed to come from behind twice and a very floaty ball gave Kudla a chance to secure the point. 5-2.
11:19 PM3 months ago

As the game goes on Nadal is master and lord of the match, on this occasion he went with a perfect 5-1 pace.
11:14 PM3 months ago

Kudla has not been able to react since he won the first point and Nadal is on his way to victory. 4-1.
11:09 PM3 months ago

Nadal took the point with ease where Kudla could not respond to the serves or leaving the ball in a very comfortable situation for the Spaniard. 3-1.
11:04 PM3 months ago

The second set starts between Kudla and Nadal.
10:44 PM3 months ago

Now who made the mistakes was Kudla to leave it at the net and Nadal had no major problems to take the point and the set 6-3.
10:39 PM3 months ago

Nadal crashed several shots into the net and Kudla took enough advantage to take the point. 5-3.
10:34 PM3 months ago

Nadal rallied with a pair of aces that helped him take the point 5-2 and is just one set away from taking the first set in his return to Acapulco.
10:29 PM3 months ago

Kudla played one of those perfect games and at the end with a drop shot he cut the difference 4-2.
10:24 PM3 months ago

Perfect passing by Nadal, including a shot that should have been checked and that with the edge was in. The advantage is for the Spaniard 4-1.
10:19 PM3 months ago

Two good shots at the end of Nadal earned him the point and the advantage is now 3-1.
10:14 PM3 months ago

Great performance by Nadal and he went clean through, unable to give his opponent a reaction. 2-1.
10:09 PM3 months ago

Nadal with two bad shots despite having the advantage and missed the point. The game tied at 1.
10:04 PM3 months ago

The first point of the game went to Nadal unopposed by his opponent. 1-0.
9:59 PM3 months ago

Play begins between Nadal and Kudla.
9:54 PM3 months ago

Nadal and Kudla are already in the field and the draw has been made. 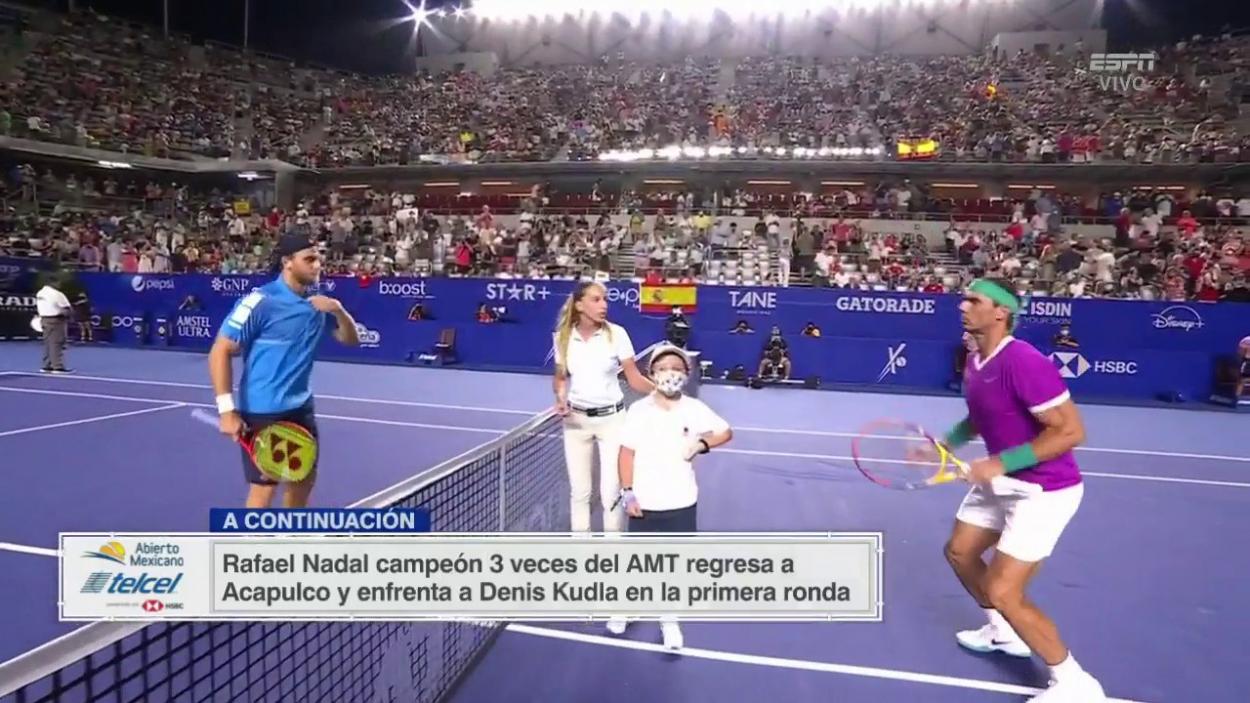 In minutes the match between Rafa Nadal and Denis Kudla will start, highlighting that both are already entering the field.
9:44 PM3 months ago

Rafa Nadal comes from being champion of the Australia Open by defeating Russian Daniil Medvedev by a score of 3-2, remembering that they can face each other again in this event, which would be one of the main attractions.
9:39 PM3 months ago

Medvedev won 6-3, 6-4 against Frenchman Paire, so the match between Nadal and Kudla will be able to start on time as scheduled.
9:34 PM3 months ago

People are already outside the arena making their way in to watch the two remaining matches at the Acapulco Open today, including Nadal's debut.

Italian Matteo Berrettini had to retire in the second set due to muscle discomfort, which is why American Tommy Paul, despite losing the first set, will advance to the next round.
9:24 PM3 months ago

Practiced in the morning

Rafa Nadal this morning had the opportunity to practice for a while and get ready for his debut that will happen in a few more minutes. 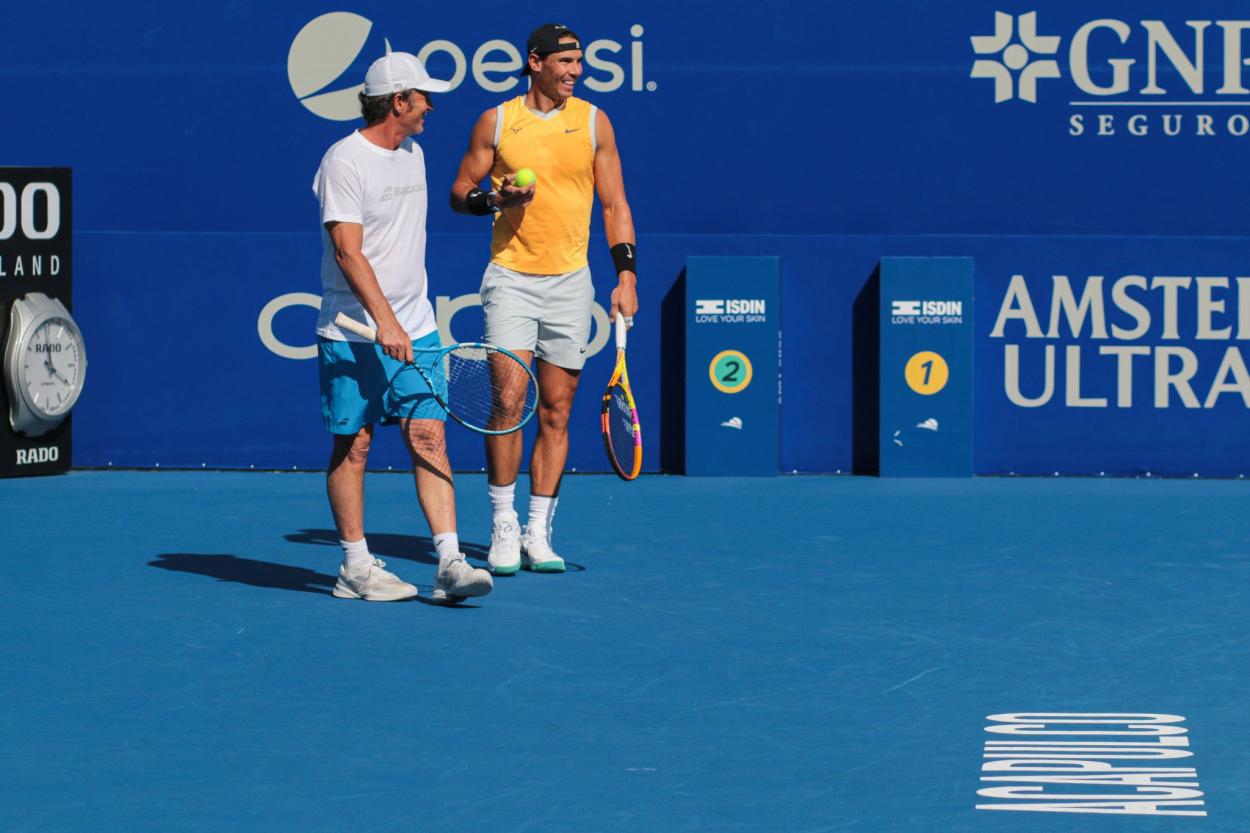 The fans are slowly beginning to fill the NGP Seguros Arena in Acapulco because the long-awaited debut of Spaniard Rafa Nadal is approaching.
9:14 PM3 months ago

It should be remembered that last year Rafa Nadal did not compete in the tournament after being the reigning champion, so, let's say, he will be defending his crown after two years.
9:09 PM3 months ago

It should be noted that the American Kudla has already played a couple of matches in the Acapulco Open where he defeated the Mexican Pacheco 2-1 but lost 2-1 against the German Daniel Atmaier, however, due to the absence of his compatriot Opelka, Kudla took his place.
9:04 PM3 months ago

It should be noted that Nadal's game against Kudla will take place after the match that is currently taking place between Daniil Medvedev and Benoit Paire, where the Russian is winning 1 set to 0 and, in the second set, has a 1-0 lead.
8:59 PM3 months ago

Rafa Nadal makes his presentation at the Acapulco Open 2022 and will face American Denis Kudla. We begin with VAVEL's coverage of the first round match.
8:54 PM3 months ago

Do not miss a detail of the match with the live updates and commentaries of VAVEL. Follow along with us all the details, commentaries, analysis and lineups for this Rafa Nadal vs Denis Kudla match for the Acapulco Open 2022.
8:49 PM3 months ago

What time is Rafa Nadal vs Denis Kudla match for Acapulco Open 2022?

This is the probable start time for the Rafa Nadal vs Denis Kudla match on February 22 in several countries:

Who does the winner go up against?

For the fourth title

He returns to Mexico

Rafa Nadal a few days ago commented that he accepted the invitation to go play in Acapulco because he is at one hundred percent in his physical capabilities with the goal of winning this tournament:

"My main expectation here is to play, I have played very little for almost two years and I feel like playing and that is the simplest reason why I am here. After Australia I had to analyze how my body would respond because after such an effort I historically have a major slump for a number of days. This time I didn't have it right after returning, but later, but in terms of pain the body is responding relatively well and that led me to make the decision to be here," he said at a press conference.

For this edition the GNP Seguros Arena of Acapulco is being inaugurated, which will have a capacity of 10,400 spectators for tennis and up to 14,000 for show events, highlighting that just this Monday it was inaugurated and the president of MexTenis, Renata Burillo, said she was happy that the project has finally been carried out.

"Some years ago we were thinking about this project, which today is a reality. During this time at Grupo Pegaso we have witnessed that we have worked to the maximum in the last year to reach a successful conclusion". 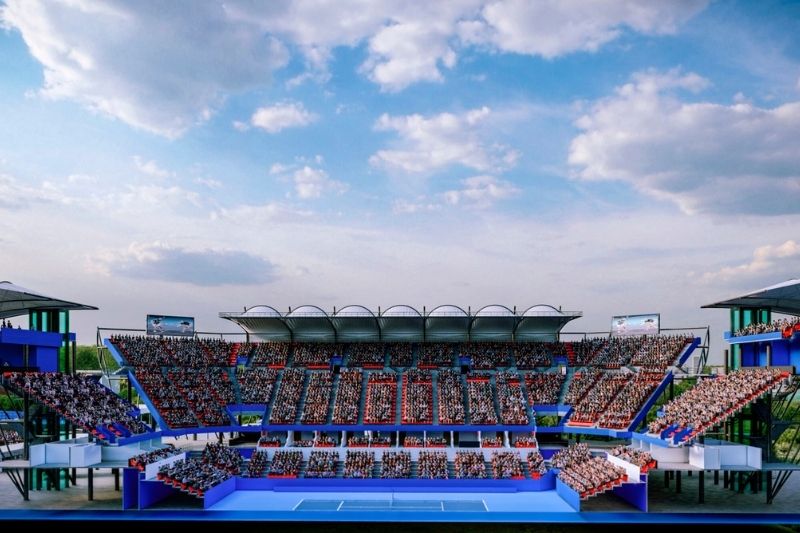 The Rafa Nadal vs Denis Kudla match will be played at the Arena GNP Seguros, in Acapulco, Mexico. The kick-off is scheduled at 9:00 pm ET.
8:19 PM3 months ago

French Open Qualifiers Day 1: What To Watch For 10 days ago
//