England's preparations for the T20 World Cup got off to a good start, as they beat Pakistan by 14 runs in the first of a three match series, which will eventually bring an end to their tour of the UAE.

Sam Billings, aided by captain Eoin Morgan, hit 50 as England recovered from a shaky start to make 160-5 from their 20 overs, and good bowling from the likes of Liam Plunkett and Reece Topley restricted Pakistan to 146 all out in their chase, with the final wicket coming from the last ball of their 20.

Having won the toss and elected to bat, Morgan did spring a surprise by announcing his team, one that was without Jos Buttler, Joe Root and David Willey. Still, he had mentioned that they were looking to give everyone a chance in the series, so it's likely that the trio could start in Friday's game.

Jason Roy and Alex Hales opened the batting together after a successful stint as the opening pair for what was a triumphant ODI series, but neither lasted long as the visitors lost early wickets. Caught off the bowling of Sohail Tanvir and Anwar Ali respectively, Roy and Hales were joined by Moeen Ali in getting out early, as England were reduced to 19/3 after four overs.

With their team in trouble, up stepped James Vince, Morgan and Billings, all of which made vital contributions as England pulled their score up.

Vince, on debut, and Morgan at first had the job of steadying the ship, and brought England to a safe 67/3 after 10 overs, a position from which they could accelerate. It looked like Vince would make a half-century, only to be bowled by Wahab Riaz for an valuable 41 from 48.

Morgan kept on going, but was soon surpassed by the impressive Billings, who came in and smashed his way to a half-century, as England ramped through the gears. Striking five four's and two sixes on his way to 53 from just 25 balls, he was ran out on the final delivery of the innings as England pushed for an extra run, with Morgan unbeaten on 45* from 38. 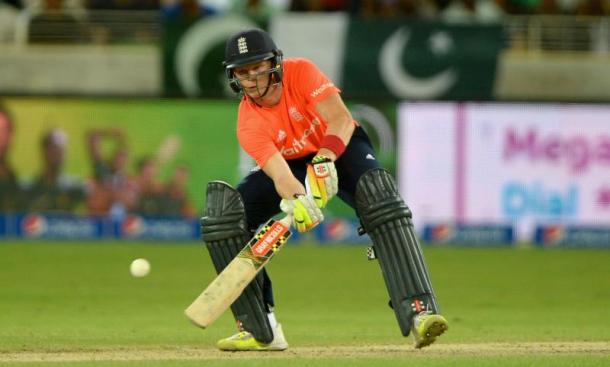 Pakistan's run chase was one that would be taken over by the constant loss of wickets, and they started off that way, with Topley and Plunkett helping England take control.

Safraz Ahmed made just one, caught by Plunkett off Topley's bowling, before the former snared two early wickets of his own, having both Mohammad Hafeez and Rafatullah Mohmand caught off his bowling.

Stephen Parry then floated a beauty to clean bowl Mohammad Rizwan, leaving Pakistan a troublesome 45/4 after eight overs. Sohaib Maqsood and Umar Akmal did put together a small partnership to get the runs flowing again, before they both ended up at the same end in the latest of Pakistan's running woes, with the latter ran out for 19 from 13.

That looked to put pay to both Pakistan's run chase, and their moods, as captain/talisman Shahid Afridi was removed by Parry for a golden duck, a wicket which led to a quick collapse to 100/8, still 60 runs shy of England's total.

However, spirited batting from the aforementioned Tanvir and Wahab did bring the hosts back into contention, with the bowlers reaching 24* and 17* as Pakistan needed 20 off the last over to win. It wasn't to be though, as Wahab was caught by Moeen Ali off Topley, and Imran went from the final ball, as England took a 1-0 lead in the series.