England secured a close victory over Pakistan in the second of the three T20 Internationals.

With England winning the toss and choosing to bat, it was upto them to put the game beyond Pakistan. Jason Roy and Alex Hales got England off to a lightning start.

The openers shared a stand of 32 of 4.1 overs until Hales departed for a run a ball 11 when he was trapped LBW by Shahid Afridi. Roy was the next man to fall and after hitting two extremely powerful sixes he looked to speed up even more. He eventually fell to Afridi for 29 off 22 balls, he was caught behind after the wicket-keeper juggled his initial attempt.

James Vince and Root replaced the openers and both looked to score quickly. Vince built on his 41 on debut with another explosive innings. He eventually fell for 38 off 24 balls when he was caught trying to go even bigger. Root also fell for a relatively poor 20 as he also tried to clear the midwicket boundary.

Sam Billings couldn't continue his run of form, he departed for 11, Buttler however did score quickly. The stand in captain scored 33 off 22 balls before he fell to Sohail Tanvir. Willey and Liam Plunkett departed quickly, the pair didn't make five between them. Woakes finished the innings with some good running and powerful hitting as finished 15* off 7 balls.

England finished 172-8 setting Pakistan a target of 173 to win.  No side has ever chased down more than 170 successfully in a T20 international in the UAE. Shahid Afridi was the pick of the bowlers, he finished 3-15 off his 4 overs.

Pakistan got off to a great start to their innings, thank to a mixture of great hitting and disgraceful bowling Stephen Parry made the crucial breakthrough when he produced a piece of brilliance to draw Shehzad out and he was stumped by Buttler,he made 28 from 18. Spin continued to produce for England. Adil Rashid then joined in on the act as he had Rafatullah Mohmand stumped,he scored 23 from 24. The first time in T20 international history both openers have been out stumped. 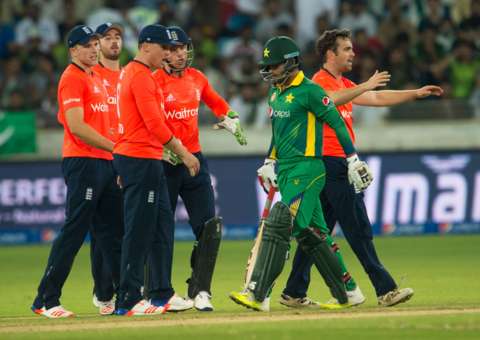 Pakistan rebalanced with Mohammad Hafeez, he scored 25 off 20 before he tried to play Plunkett into the leg side, but all he could do was produce a leading edge to Willey at mid on. Sohaib Maqsood and Umar Akmal fell quickly to Rashid and Plunkett respectively making just 5 between them.

Malik was the next man to fall. The Pakistan number 3 has rescued the Pakistani innings after the two openers had fell. He scored 26 off 21 balls when Plunkett removed him as Malik attempted to pull the England quick over midwicket.

Boom Boom Afridi. He certainly lived up to his name today. Following his heroics with the ball, he showed some fireworks with the bat today. The Pakistani captain hit 24 of just 8 balls including one 4 and three 6's. He couldn't go all the way however and was dismissed by Woakes, he was caught by Plunkett at short fine leg.

Heroics from Afridi left it down to Woakes. Pakistan needed 11 to win. Woakes started perfectly getting Sarfraz Ahmed to chop on first ball. Woakes was on a hat-trick. His hat-trick ball wasnt good enough and Sohail Tanvir hit it away for 4. 7 off 4 required. The third ball was a single. 6 off 3 and more importantly Tanvir off strike. Another single. 5 from 2. Another single. Four needed from the final ball. Dot ball.

England won following some final over heroics from Chris Woakes who produced some great death bowling. England will now take an unassailabe 2-0 series lead into the final T20 on Monday in Sharjah.

We will be covering the game live here on VAVEL.