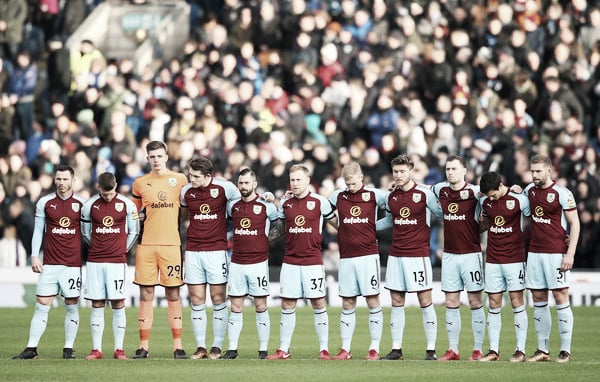 Founded in 1882, Burnley are one of the oldest teams in English football. The Football League, itself, wasn't founded until 1888 and so the Clarets were initially only involved in friendly matches and FA Cup ties, entering the latter tournament in 1885. In 1888, they became one of the twelve founding members that included local rivals Preston North End.

Their nickname, the Clarets, is based on the primary colour of their kit and the emblem is representative of the town. The town is located in East Lancashire with Blackburn Rovers their fiercest rivals.

Home matches are played at Turf Moor, a venue that holds 21,944 people, while Bertie Bee is their mascot.

Recently, the club were given an opportunity to make the UEFA Europa League but couldn't escape the qualifying rounds. In 1961, they made the quarter-finals of the European Cup, the furthest they have ever managed in a European tournament. They are also one of only five teams to have won every professional division in England.

During their first title win in the 1920-21 campaign, Burnley embarked on an unbeaten run of 30-matches, an English record until Arsenal's 2003-04 Invincible's season.

The 1959-60 title success was a remarkable success. The two pioneers, Bob Lord and Harry Potts, have gone down in Burnley folklore as legends of the East Lancashire club. Lord was the chairman and Potts was the manager and, together, they achieved success with a stable financial model which focused on developing youngsters like the great Jimmy McIlroy.

Of course, it wasn't all sunshine and roses for Burnley.

In 1979-80, the club fell into the Third Division and they fell into the Fourth Division only five years later. The 1986-87 campaign was a brutal one for Burnley fans. They finished it needing victory against Leyton Orient to avoid relegation to the Conference and, potentially, liquidation. Ian Britton hit a second-half winner for Burnley and ensured their status as a functioning football club.

Burnley fans have had it tough but tasted the top-flight once again in 2008. Owen Coyle, manager at the time, took the club into the Premier League in his first full season in charge. A brilliant strike from Wade Elliott was the £60-million promotion goal that saw Burnley past Sheffield United in the Play-Off Final.

The Clarets won their first ever match in the Premier League against Sir Alex Ferguson's Manchester United. The Red Devils had just won their third league title in three seasons but fell to a shock defeat after Robbie Blake smashed home a stunning volley. Brian Jensen, known to Burnley fans as 'The Beast', made a series of fine stops, including a crucial penalty save against Michael Carrick. It was a wave of euphoria for everyone associated with the club.

Fortunes quickly changed, though, when Coyle joined Bolton Wanderers in the middle of the following season. Brian Laws, his successor, couldn't keep Burnley in the Premier League and they made an instant return to the Championship.

Eddie Howe replaced Laws but later returned to his former club Bournemouth, paving the way for the Sean Dyche era. Howe tried to build his successes by playing attractive football and, while Burnley scored a lot of goals, they also conceded a lot. Promotion looked to be a long way away and Howe decided to return to his previous employers. Dyche took up the mantle and quickly looked to change the style.

The ex-Watford boss had a tough start to his Burnley career, trying to solidify a leaky defence, but managed to steer the club to mid-table security. Since then, the rest is history.

Like Coyle, Dyche achieved a promotion in his first full season but, unlike the Scot, he managed it by spending next to nothing. It was a remarkable success that relied heavily on team spirit and unity, finishing second to gain automatic promotion.

Despite suffering relegation after achieving that promotion, Dyche remained calm and bounced back at the first opportunity, this time as Champions.

Burnley are currently in their fourth successive season in the Premier League and are establishing themselves among the elite of English football.

In 2000, the club brought in Ian Thomas Moore as their first million-pound-man. The club slowly built up their financial prowess and made Steven Fletcher (£3-million from Hibernian) their most expensive acquisition after gaining promotion to the Premier League in 2008. The club didn't break that record for seven years, splashing £6-million on Brentford striker Andre Gray after suffering another instant relegation to the Championship. The current record-transfer fee of £15-million is shared between the former Leeds United hit-man Chris Wood and ex-Middlesbrough captain Ben Gibson.

* Out on loan at Brisbane Roar

Burnley have a women's team (Burnley FC Women) in the FA Women's National League North. They formed in 1995 and are currently managed by Matt Bee. The club just missed out on the emergence of Rachel Brown-Finnis, a hometown girl who became an England international goalkeeper and now provides punditry for BT Sport.

The Clarets also have various youth team setups. Their U18 group, managed by Tony Philliskirk, recently reached the sixth round of the FA Cup. Steve Stone manages the U23s but recently came under fire after some bullying allegations surfaced. Stone fought off those claims and remains the head coach.