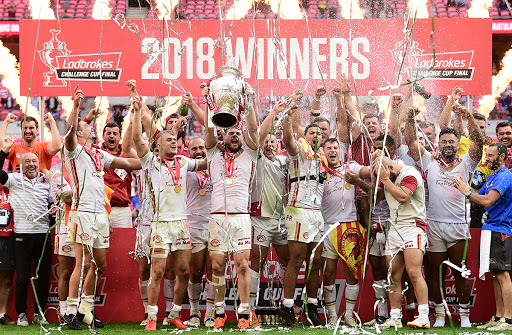 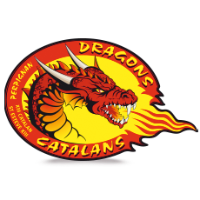 Catalans Dragons (Dragons Catalan in French and Catalan) are a professional rugby league club from Perpignan, Pyrénées-Orientales, France who play in the primarily-English Super League. They are the only side from continental Europe in the division, and alongside Toronto Wolfpack from Canada, they are one of only two non-English teams who play in the Betfred Super League. Formed in 2000 and coached by Steve McNamara, they are the only team not from Britain to win the Challenge Cup since it began in 1896, defeating Warrington Wolves 20-14 at Wembley Stadium on 25 August 2018.

Catalans Dragons were founded in 2000, when two Perpignan sides, XIII Catalan and  AS Saint Estève merged. This new team took the name of Union Treiziste Catalane, often abbreviated to UTC.

In 2005, UTC applied to join the top tier of Rugby League in England and the entirety of Europe, the Super League. They joined from the 2006 season onwards, being selected ahead of fellow French teams Toulouse Olympique and Villeneuve Leopards. UTC remained in the French system to act as a reserve club, eventually changing their name to  Saint-Estève XIII Catalan to reflect the two sides that joined together to originally form the club.

The Catalans are not the only French club to have played in the Super League from France, with Paris Saint Germain being the first. However, Rugby has its stronghold in the south of the country, and PSG struggled and exited after only two years.

So that the Dragons would do as well as possible, French rugby allowed them to sign players from other teams in the country without a fee, and they were made exempt from Super League relegation for their first three years.

They struggled in their first campaign in the top flight, finishing rock bottom with many of the French players suffering from tiredness towards the end of the campaign.

2007 saw strong recruitment from places such as the NRL and the team’s fortunes improved. At the end of August, Catalans became the first non-British and French team to reach a Challenge Cup final after defeating Wigan in the semi-finals. They lost the match to St Helens, and finished in a respectable tenth in the league.

In 2008, Catalans finished better again and placed third after a strong season. They won their first-ever playoff match against Warrington Wolves, but bombed out in their next game where wigan won 50-26.

In 2009, the club broke even more records. First, when they played against Welsh club Crusaders on 23 May, it was the first Super League match without an English team in the game. Later, the club played Warrington in the first game in Spain in a match at Estadi Olímpic Lluís Companys in Barcelona. Around 1000 tickets were sold for the game in what was an attempt to grow the sport in the local area.

In 2016 and celebrating their tenth season in the Super League, Catalans went on a recruitment drive and had a strong start that saw them sit second in April. Injury crisis meant that they lost their final six regular games and headed into the Super 8s two points adrift of St Helens. Five defeats from seven saw them finish in sixth place and miss out on a spot in the playoffs.

After a weak 2017 season, Catalans found themselves in the ‘Million Pound Game’ and close to relegation to the second tier. However, they won their game against Leigh Centurions 26-10 and stayed in the top flight.

In 2018, eight years after the club was founded, Catalan Dragons made Rugby League history by becoming the first club from outside of Great Britain to win the Challenge Cup in the competition’s 122-year history.

Catalans beat St Helens 16-35 in Lancashire on the 5th of August at the University of Bolton Stadium to secure a spot in the final. Twenty days later, the final was played at Wembley Stadium in London in front of 50,672 fans in attendance, the lowest figure for a Challenge Cup final held at Wembley since World War Two. An early try from Lewis Tierney got them off to a good start against Warrington Wolves, and two more from Ben Garcia and Brayden Wiliame as well as four goals from Josh Drinkwater secured a 20-13 win for the side from the Basque country.

It was a big victory for the French Game, and after the match, Catalans captain Remi Casty told BBC Sport:

"The progression of the club and the team through the 11 years is awesome and a great achievement for Catalans and for rugby league in France.”

In 2020, Catalan Dragons became steeped in controversy around the Rugby League world when they announced the signing of Israel Folau. The Australian holds the belief that the bible teaches that those who practice homosexuality will go to hell (going as far as to say that the 2019-20 Australian Bushfires were God’s judgement on Australia for allowing same-sex marriage and abortion). Folau had previously had his contract with Rugby Australia terminated due to this.

Fellow Super League club Wigan Warriors announced that their next game against Catalans would be named Pride Day, and the club has seen much backlash around the signing.

All information is correct as of 1st April 2020