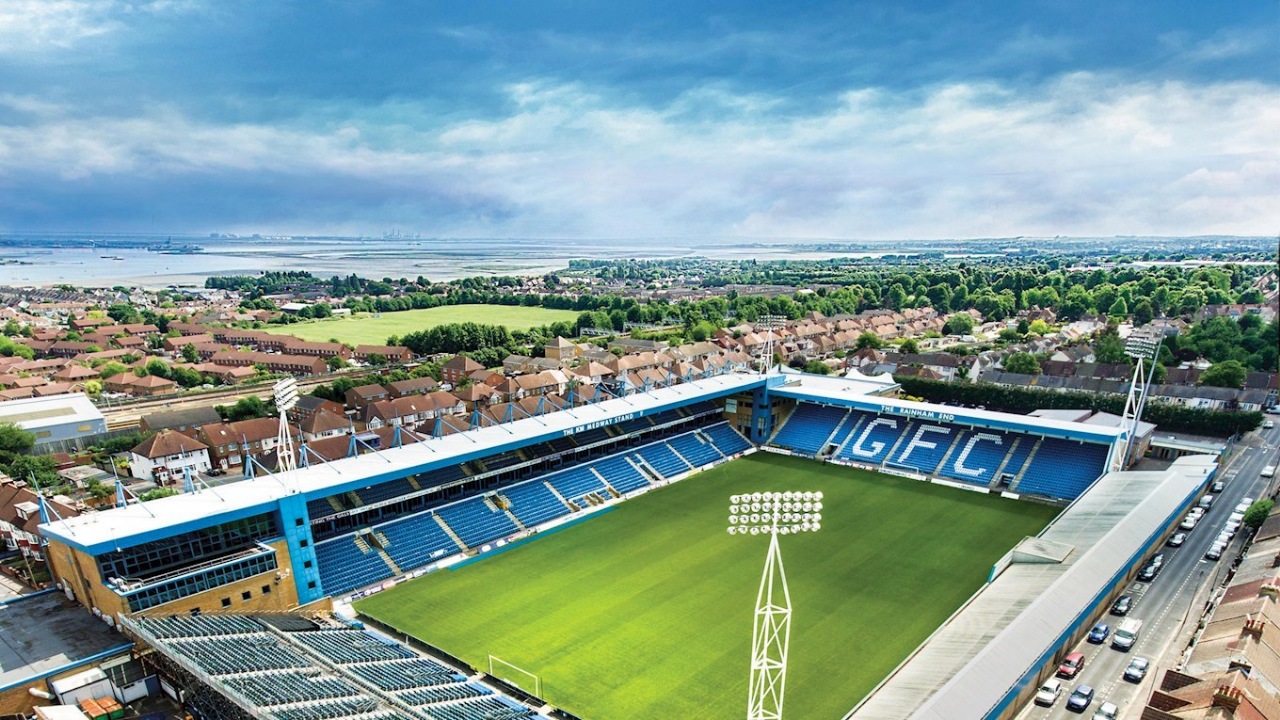 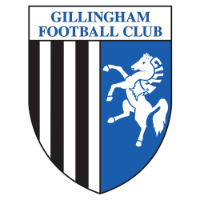 Gillingham Football Club were originally known as New Brompton FC, and were formed at the Napier Arms pub in May 1893. They changed to the current name in time for the 1912/13 season.

The share capital was set at £1,500 and a plot of land, subsequently to become known as Priestfield Stadium, was purchased for £600. The club adopted professional status the following year and became founder members of the Southern League, winning the Division Two title in 1895 and gaining promotion by beating Swindon 5/1 in a test match (a prelude to today's play-offs).

They continued to play in the Southern League without any great success, in fact at the end of the season’s either side of the first World War, the team finished bottom of the table.

In 1920 the Gills became founder members of the Third Division but things on the pitch remained exactly the same as they finished bottom once again.

Over the next 20 years the highest position reached in the Division Three (South) table was seventh in 1932/33 but then, at the end of the 1937/38 campaign catastrophe struck.  The club's fifth application for re-election met with failure in 1938 which meant losing their Football League status with Ipswich Town taking their place.

It was a major blow, but the directors decided to continue - on the chairman's casting vote - and the club went on to enjoy considerable success. They were Kent League champions in both 1944/45 and the following season saw them victorious in the local Kent Leagues and cups.

A return to the Southern League brought further success after the war, winning the ‘double’ of the League and League Cup in 1946/47 and then the league title once again two years later.

So, when the decision was made to enlarge the old geographical Third Divisions from 22 to 24 teams in 1950, the Gills, as expected, topped the voting by a long way and were readmitted. A crowd of 19,525 were at Priestfield Stadium on the opening day of the 1950/51 season for a 0-0 draw with Colchester United.

Yet Football League honours continued to elude the club, they did finish fourth behind Bristol City, Leyton Orient and Southampton in 1954/55, but all that changed when that magic moment finally arrived at the end of the 1963/64 campaign. Freddie Cox's tight defensive team pipped free-scoring Carlisle United for the old Fourth Division title on goals average (goals scored divided by goals conceded) after both clubs had finished with 60 points.

Although they were relegated in 1970/71, the club bounced back as runners-up to Peterborough in 1973/74, a season that saw Brian Yeo equal Ernie Morgan’s club goalscoring record of 31 goals in a season. The Gills came extremely close to going up another level in 1978/79, finishing fourth in the final table and only two points behind champions Shrewsbury Town. However; despite picking up two wins and a draw from their final four games, Gerry Summers' side just missed out.

A period of unrivaled consistency came during the middle 80s under Keith Peacock's wing and the Gills finished just below the promotion places on several occasions before almost doing it when the play-off system was introduced in 1987.

They overcame Sunderland on the away goals rule after drawing 6-6 on aggregate, Tony Cascarino netting five of them, but strangely - and rather annoyingly - the same rule didn't count in the final against Swindon Town. If it had, then Gillingham, with a 1-0 home win followed by a 1-2 defeat in the second leg, would have been up. Instead, the final went to a replay, at Selhurst Park, which the Wiltshire side won 2-0.

The team went into decline thereafter, dropping back into the basement division in 1989 and almost into the Conference four years later. All depended on the result of the final home game, billed as judgement day against fellow strugglers Halifax Town.

The outcome was simple: whoever won stayed up. In front of a packed Priestfield, Thankfully goals from Tony Eeles and Paul Baker saw the Gills win 2-0 to secure their safety at the West Yorkshire club’s expense.

Chairman Paul Scally took over in the summer of 1995 and so much has been done and so much achieved under his direction and leadership since then. The club's rapid rise and progress has included four promotions, two appearances at the old Wembley and one at the new, a run through to the quarter-finals of the FA Cup and the generation of funds to construct three new stands.

The Gills were promoted under Tony Pulis at the first time of asking in 1995/96, a goalless draw at Craven Cottage in the penultimate game of the season proving enough. There were joyous scenes as the players, management and staff celebrated on the pitch in front of thousands of travelling supporters on the Putney End.

It was at the end of the 1998/99 campaign that the Gills went within a minutes of reaching Division One when they faced Manchester City in the Division Two play-off final in their first-ever visit to Wembley Stadium.

Nobody will really need reminding, but going into the last minute of normal time Gillingham were leading 2-0 thanks to goals from Carl Asaba and Robert Taylor.  Joe Royle’s team pulled one back in the 90th minute thanks to Kevin Horlock, equalised in the fifth minute of stoppage time through Paul Dickov and went on to win on penalties after extra-time.

However, 12 months later, with Peter Taylor at the helm, the Gills were back at the venue of legends, this time backed by a huge army of more than 43,000 fans. And this time there was a reversal of roles as the team hit back from 2-1 down to beat Wigan Athletic 3-2 via extra-time goals from 38-year-old Steve Butler and Andy Thomson.

At last, after more than a century of waiting, the club had attained a place among the elite in the top two divisions of the Football League structure.

That 1999/2000 campaign also saw the Gills reach the quarter-finals of the FA Cup, the furthest they have ever reached previously. Cheltenham Town, Darlington and Walsall were all beaten in the first three rounds, then top-flight teams Bradford City and Sheffield Wednesday both lost 3-1 at Priestfield.

That set up the quarter-final clash with a star-studded Chelsea, who included the likes of John Terry, Marcel Desailly, Gus Poyet, Didier Deschamps, Gianfranco Zola and George Weah, and it was certainly no disgrace despite the 5-0 scoreline at Stamford Bridge.

Andy Hessenthaler took over as player-manager and the club went from strength to strength with higher placed finishes over the next three seasons, the highest being 11th in 2002/03.

The following campaign found Gillingham in a relegation battle for the final half of the 2003/04 season when in fact survival was not secured until the final day of the season at the Britannia Stadium. That day saw the Gills pick up a point from a goalless encounter against former manager Pulis's Stoke City and the club stayed up by a solitary goal.

Unfortunately things did not go so well in 2004/05 and, following a hefty defeat at Crewe Alexandra in December, player-manager Andy Hessenthaler decided he had taken the team as far as he could and stepped down. At the time Gillingham were in a precarious position in the league and a whole nation of football pundits predicted that their time was up in England's second tier of football.

Stan Ternent took over the managerial reigns in December, along with assistant Ronnie Jepson, and took on a daunting challenge of proving the critics wrong and maintaining the club’s status in the newly named Coca-Cola Championship. The fortunes of the team were dramatically transformed and it appeared that the Ternent-Jepson combination was going to have the desired outcome.

Against all the odds the team was just five minutes from safety in the penultimate game of the season only for Cardiff to force an equaliser which meant Gillingham's destiny was going to be determined on the final day at already relegated Nottingham Forest.

Once again the team was just five minutes from safety at the City Ground, but a Forest equaliser and results going against them elsewhere meant Gills dropped back into the relegation zone at the final whistle and in a twist of fate were condemned to playing League One football in 2005-06 by a solitary goal.

Ternent rejected a new contract at Priestfield but Jepson remained at the club as assistant manager to the newly-appointed Neale Cooper.  Cooper would manage the Gills for only 22 matches before resigning in November 2005.  Jepson was promoted to manager and would steer the Gills to mid-table finishes in 2006 and 2007, however, he left the club in September 2007 following a disastrous start.

Iffy Onoura had returned to the club and he took over as caretaker manager until Mark Stimson was appointed as boss on November 1 2007 but despite a strong late season rally he was unable to prevent the Gills relegation to League Two.

A couple of mixed years followed as Stimson went on to achieve promotion at the very first attempt. Simeon Jackson etched his name in club history by heading the 90th minute winner that secured a 1-0 victory over Shrewsbury Town in the 2008/09 League Two play-off final at Wembley once again.

Unfortunately, Gills found themselves back in League Two after just one season, a mixture of a last day defeat at Wycombe Wanderers, along with results elsewhere in the country and a poor away away saw them relegated once again and Stimson departed two days later.

That paved the way for Andy Hessenthaler’s return as manager in May 2010 having previously led Dover Athletic to a couple of back-to-back successes. With promotion a priority on the remit, the Gills legend twice led the club to eighth place finishes in the League Two table and his contract was terminated by mutual consent in May 2012.

Martin Allen was named as his replacement two months later and guided the club to the League Two title in his very first season. However, after a poor start on the club's return to League One, he was removed from his post in November 2013 and replaced by Peter Taylor, initially on an Interim basis.

The former England U21 boss ensured the club guaranteed survival, and was handed a new two year deal in May 2014. However he was dismissed on New Years' Eve, and after a lengthy search Justin Edinburgh was named the club's new boss in February 2015.

Gills topped the League 1 table going into January 2016, but after a poor run of form the Kent side narrowly missed out on the play-offs. Going into 2016/17 there were high hopes for another strong campaign, but following a 1-0 defeat to Oxford at Priestfield in January 2017 Edinburgh was dismissed and replaced by Ady Pennock.

Despite some strong displays, form didn't improve as hoped and a 0-0 draw was required at Northampton on the final day of the season to retain league status. Ady was handed a one-year deal soon after, with Peter Taylor returning as Director of Football, but Pennock's reign would only last another few months with a 3-0 defeat at Rochdale his last game in charge.

Steve Lovell took over as caretaker manager and guided Gills to an excellent 1-0 win over Peterborough in mid-October, and with results picking up at an impressive rate, Chairman Paul Scally gave the club's former striker a deal until the end of the season and a new two-year deal was agreed in 2018.