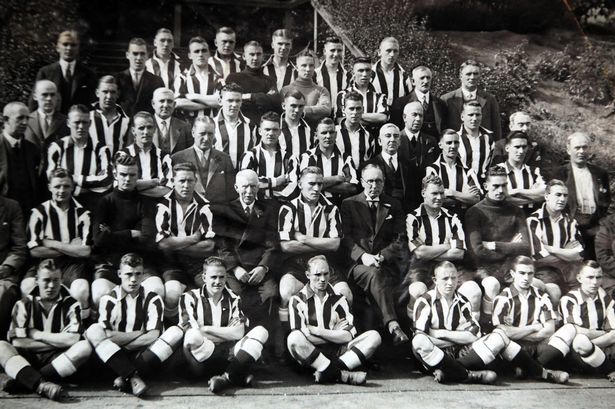 Formed in 1892 when Newcastle East End and Newcastle West End merged to create Newcastle United. The club has been a member of the Premier League for every season apart from three, spending 86 seasons in the top flight and never dipping below England’s second division.

Newcastle East End and Newcastle West End were both formed in the 1880s and became rivals in the Northern League. West End were the side to play at St James’ Park from 1886. In 1889 East End became a professional side, whereas West End had entered serious financial difficulties and approached East End with a view to a takeover. However, West End would eventually dissolve and a host of players and backroom staff joined East End, essentially merging the two sides. East End then took over the lease on St James’ Park in 1892.

On December 9, 1892, in a bid to attract larger crowds they decided to change their name from Newcastle East End to Newcastle United. They joined the second division in 1893 with their first game being against Woolwich Arsenal in a 2-2 draw. They were first promoted to the First Division in 1888-89 season.

Newcastle dominated English football in the 1900s building up a young promising squad who feared nobody. They won the league on three occasions during 1904-05, 06/07 and 08/09 season as well reaching four FA Cup finals in 1905, 06, 08 and losing all three before eventually winning it in 1910 against Barnsley and then lost in the final again the following year against Bradford City. However, in 1934 they were relegated to the Second Division after 35 seasons in the top flight.

World War II came at the best time for Newcastle looking back at it as they were almost relegated but saved on goal averages in 1938. During the war period, they brought in Tommy Walker, Bobby Cowell and the clubs’ second top scorer of all time Jackie Milburn. Newcastle won the FA Cup three times in the 1950s before declining back into the Second Division in 1961. Joe Harvey took over as manager guiding the club back to the top flight and then qualifying for Europe for the first time in the club’s history during the 1967/68 season. The following year they won the 1969 Inter-Cities Fairs Cup  Final, winning 6-2 over two legs against Hungary’s Ujpest in the final.

Sir John Hall became club chairman in 1992 and appointed former player Kevin Keegan as manager who managed to steer the club away from relegation to the Third Division. He was then given more money and resources to improve Newcastle and he added players such as Rob Lee and Barry Venison. The club eventually won the First Division in the 1992/93 season earning them promotion to the newly formed Premier League. During their first season, Keegan guided the club to a third-place finish, their highest since 1927 and earning ‘The Entertainers’ tag.

Keegan guided his side to two consecutive runners-up finishes in 1995-96 and 1996-97. Most famously during the 95/96 season when Newcastle blew a huge lead ahead of Manchester United from January which included a famous 4-3 defeat against Liverpool. Many people believe that to be the best game the Premier League has ever seen with the iconic moment Keegan is slouched over an advertising board when John Barnes scored the winner. This period of greatness for Newcastle was largely down to attacking players such as Les Ferdinand, David Ginola and club and Premie League record scorer Alan Shearer (with 260 goals), who was signed in 1996 for £15 million.

Keegan left the club in January 1997 being replaced by Kenny Daglish which led to an unsuccessful period with Daglish being replaced by Rudd Gullit who quit four games into the 1999-00 season. This was after a number of disagreements and fallings out with chairman Freddy Shephard, Alan Shearer and Duncan Ferguson. Famously Gullit left out both Shearer Ferguson for a derby game against Sunderland which saw fans turn on the manager.

The club was bottom of the league after four games when they turned to Sir Bobby Robson. Robson won his first game as manager at St James’ Park with an 8-0 win over Sheffield Wednesday. Robson guided the club to back-to-back qualifications for the Champions League in 2001/02 and 02/03 before finishing fifth in 2004/05 but exited in the qualifying rounds. Despite Robson returning the good times, he was sacked surprisingly in August 2004 following a number of disagreements with the board, something the Newcastle fans would never forget.

After a number of managerial appointments including Graeme Souness and Glenn Roeder, Sam Allardyce was appointed in May 2007, however, Shephard sold the club to Mike Ashley in June 2007. Allardyce then left by mutual consent in January 2008 and replaced by Keegan but it did not last long with the manager never seeing eye-to-eye with Ashley before leaving the club in September 2008.

Following Keegan’s resignation, Joe Kinnear was appointed but had to step down in February 2009 because of heart problems. He was replaced by Shearer until the end of the season and Newcastle ended up getting relegated that season on the final day thanks to a 1-0 defeat against Aston Villa. The side that got relegated included Michael Owen, Obafemi Martins and Damien Duff and it was the first time the club dipped out of the Premier League since 1993. Following on from the relegation Ashley put the club up for sale in June 2009 asking for £100 million which never occurred and thus appointed Chris Hughton as permanent manager. Hughton went onto guide the team to an immediate promotion back to the Premier League winning the Championship title with over 100 points.

During their first season back in the Premier League Hughton had Newcastle in the top half but was sacked with the club wanting someone with more managerial experience and appointed Alan Pardew. In 2011/12 Pardew guided Newcastle to a fifth-place finish qualifying for the Europa League and participating in Europe for the first time since the Bobby Robson era. Pardew won the Premier League manager of the season award as well as the LMA Manager of the year award. It was a struggle domestically suffering 10 losses from 13 games in the first half of the campaign and only staying up thanks to a 2-1 win over QPR on the penultimate day of the campaign. However, in Europe Newcastle experienced some high points. They reached the quarter-finals thanks to a last-second header from Papiss Cisse against Anzhi Makhachkala which set up a match against SL Benfica. The Magpies were beaten over two-legs as Benfica eventually lost to Chelsea in the final.

During the 2014/15 season, Newcastle failed to win any of their opening seven games which turned fans on Pardewing and began a Pardewout.com website and protests could be seen at most home games. Their form turned over the festive period as they rose to fifth in the table at their highest point. In December 2014 Pardew left his job to join Crystal Palace who he played for during his career. John Carver took over for the remainder of the season and Newcastle required a final day win over West Ham United to secure Premier League safety with Jonas Gutierez scoring the final goal after battling back from testicular cancer that season.

Steve McClaren was brought in to push Newcastle away from the relegation zone and signed a number of players such as Georginio Wijnaldum, Aleksander Mitrovic, Chancel Mbemba and Emmanuel Riviere. However, that could not help stop the Magpies from experiencing another relegation under Ashley. After just nine months in charge, he was sacked with the club sitting 19th in the Premier League. Newcastle turned to Rafa Benitez but despite turning around the club’s form they were relegated before the final day of the season when they beat Tottenham Hotspur 5-1 despite having 10-men.

Once again, Newcastle bounced back to the Premier League immediately winning the Championship title again. They won it on the final day of the season beating Barnsley 3-0 while Brighton & Hove Albion drew 1-1 with Villa.

For their first two seasons back in the Premier League Benitez guided them to a 10th and 13th place finish despite being in the relegation zone over the festive period both years. However, Benitez felt he could not continue working under Ashley after a number of public outcries for funding in the transfer market as well as at the training ground. In June 2019 Benitez left the club as he did not sign a new deal to stay on Tyneside.

Newcastle took their time to find a replacement before eventually appointing boyhood fan Steve Bruce in July 2019. Bruce guided Newcastle to their first quarter-final appearance in the FA Cup for 14 years.