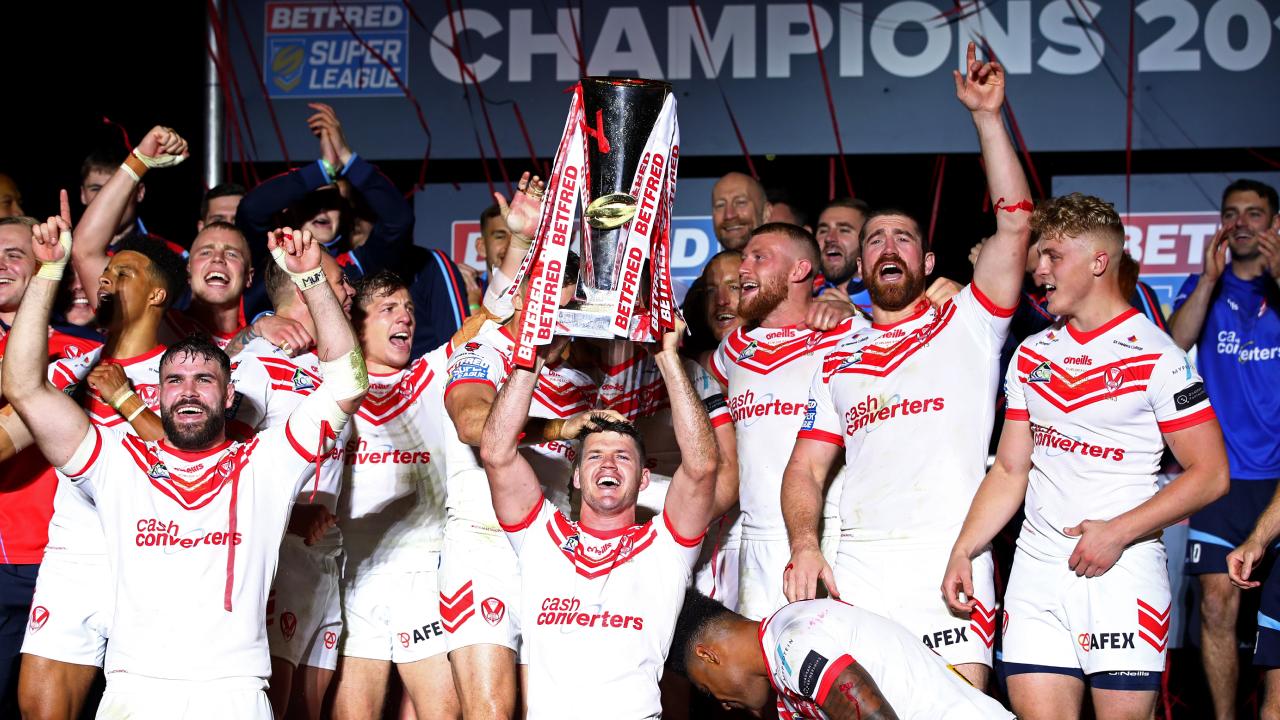 St Helens R.F.C. are a professional Rugby League club from St Helens in the historic county of Lancashire (now Merseyside) who play in the Betfred Super League, the top tier of Rugby League across England and the entirety of Europe.

The Saints are one of the best-supported clubs in Rugby League, and despite the games' decline in recent years, their crowds have actually grown since the 90s with an average of 11,478 spectators turning out to the Totally Wicked Stadium in 2018 to watch them play in the Super League.

St Helens were founded on 19 November 1873 and played their first ever match on 31 January against Liverpool Royal Infirmary. In 1895, the club were one of the 22 clubs that resigned from the Rugby Football Union and established the Northern Union. The first match in the new code was an 8-3 win at home to Rochdale Hornets in front of 3,000 spectators

The entire sport struggled throughout the period between the two world wars, and so did the saints. They spent most of their time as a mid-table side, and picked up a single title in the 1931-32 season. At this time, they also formed a rivalry with local side St Helens Recs, who played their last game on the 29th April 1939, as due to the great depression at the time, it was not possible for the town to sustain two clubs.

The club's fortunes in the 1940s did not change, but the arrival of Jim Sullivan as head coach in 1952 showed the changing tides in Rugby League. He brought a successful era of rugby to St Helens, and helped to establish the club as a respected force in not only British but also world rugby league. Under Sullivan, St Helens reached a Challenge cup final, won the Lancashire League in 1952-53, won the challenge cup in 1956, beat the Australian national team in the same year, and then won two more Lancashire Leagues, and a second County Cup.

They improved on this in the '60s. During this era, the synonymous red 'vee' of the Saints' shirt first made an appearance, whilst winning even more silverware. The same happened the decade after, with them winning two more premierships, two leagues, and two challenge cups.

The 80s did not bring as much silverware, but they still won a League Cup, Premiership, and the Lancashire Cup.

Saints become one of the most successful sides of the summer era. Since the creation of the Super League in 1996, they have won the title six times and added seven Challenge Cups to their previous five successes. They won the inaugural Super League by finishing top of the league before the playoff era began. They defeated Bradford Bulls 8-6 in the 1999 Super League Grand Final, with more than 50,000 people watching Chris Joynt's side lift the trophy at Old Trafford. They also won the World Club Challenge in 2001 and 2007, with them beating Brisbane Broncos both times.

Saints were champions in the 2019 season, and will look to keep up this form in the 2020 campaign under the stewardship of Kristian Woolf as manager.

St Helens play their games at the 'Totally Wicked Stadium' in the Peasley Cross area of St. Helens, known as Langtree Park until 2017. The stadium was given planning permission in May of 2008 and construction started in 2010.

Previously, St Helens has played at Knowsley Road for exactly 120 years after moving from a ground that they shared with St Helens Recs in the 19th Century.

The first Rugby League match was played at the 18,000 capacity ground on Friday 20th January 2012, when the saints played Widnes at home. They won this game 42-24, and moved in ready for the 2012 super League stadium.

Liverpool FC's Under 18s side also play their home games at the Totally Wicked stadium, and it is set to host games in the 2021 Rugby League World Cup as one of 21 available venues.

The North and South stands are both fully seated in the ground. The East stand is completely terraced and hosts the score board, it is used for away fans in the Super League. The West Stand is a home and the majority of its 3,786 capacity is standing, although it also houses 118 seats.

The ground has hosted international Rugby in the past, with two Rugby League International Origin Matches in 2012 between England and the Exiles, and one group match in the 2013 Rugby League World Cup between Australia and Fiji. In 2014, the stadium played host to the Challenge Cup Semi-Final between Warrington and Leeds on 9th August 2014.

In 2017, the club signed a five-year deal with Totally Wicked for the naming rights to the stadium, effective from early 2017.

St Helens have longstanding rivalries with a number of sides. Their local derby with Wigan Warriors is traditionally regarded as the biggest in British Rugby League, and both were founding members of the NRFU, meaning that it has been played since 1895. Saints also have rivalries with Yorkshire clubs Bradford Bulls and Leeds Rhinos, and have built up a strong contest with the other 'big' North West club in the Super League, Warrington Wolves.