Following the abandonment of Motherwell's SPL encounter with Dundee Utd on Saturday 4th October, it soon emerged that the Steelmen were in fact blameless over the call off. A Scottish Power issue which saw power-cuts experienced over a chunk of the surrounding area, including nearby Wishaw General Hospital was at the root of the problem.

Before such news began to filter through plenty supporters were quick to point the finger at Fir Park officials given the Lanarkshire side's somewhat chequered recent past with postponements at Fir Park.

Most recently in December 2011 Motherwell's SPL match with Hibernian was abandoned at half-time due to a floodlight fire with the Edinbugh side a goal to the good. When the match was later replayed Motherwell subsequently triumphed 4-3 thanks in no small part to a Michael Higdon hat-trick.

Postponements prior to this have included the Lanarkshire derby scheduled for 2nd January 2010 which was called off due to burst pipes after a sustained period of below-freezing temperatures across Scotland. 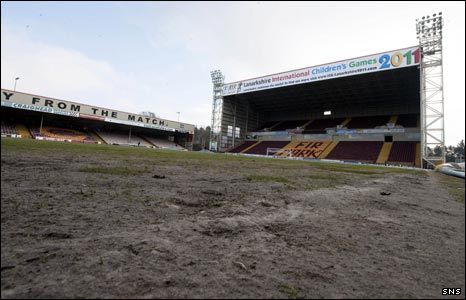 Perhaps the issue that vexed most in Scottish football were the continued pitch problems that saw a number of games cancelled; and matches that were given the go ahead saw the surface roundly criticised by opposition management, players and supporters.

The pitch problems arose after use of an undersoil heating system required to be installed in each SPL stadium by league bosses. The undersoil heating had the effect of baking the largely clay based surface on which the Fir Park pitch was layed. This prevented water from reaching the drains beneath the pitch, waterlogging the surface and effectively washing away the pitch surface.

Extended periods of bad weather saw Motherwell stuck in something of a vicious circle whereby the club were under threat of punishment if games did not go ahead. To do so they were required to make extensive use of the undersoil heating knowing all the while that every time they used that, it would only damage the surfface further.

It took a suspended SPL fine, many months of work, a much milder winter, a new groundsman and several hundred thousand pounds of remedial work before Motherwell were finally able to put their pitch problems behind them for good.

With estimates of losses of between £35,000 - £40,000 for the call of the Dundee Utd game it was an incident the Steelmen could ill afford given the precarious financial state of the Scottish game currently.

And it's that paucity of finance which places Motherwell in something of a quandry as to where they'll be playing their football in the medium-to-long term. Put simply the club don't have the money to move, but cannot afford to stay.

With each passing season Fir Park requires more and more investment just to meet ever more stringent safety requirements and therefore gain the necessary licenses to open each stand, two of the which have arguably long since seen their best days.

The East Stand, home of arguably the club's most vocal supporters, needs only the merest of rain showers to see puddles develop on its top concourse and the sight of dustbins catching leaks from the roof is far from uncommon. With a single entry and exit point long-queues are frequently in evidence as fans enter and exit and the stand.

Across the park the most senior of the stadium's stands - the Phil O'Donnell Main Stand -was built in the 1960's and is of wooden construction rendering it something of a relic in comparison to many stands in use in Scotland today. With many of its seats having no seat-back they were deemed unsuitable by UEFA when Motherwell were involved in European competition earlier in the campaign.

Throw in an audio system that can be crystal clear in one section of the ground whilst inaudable in others then there is strong evidence that Fir Park requires massive investment to bring it up to modern day standards. That or the unthinkable for many, a move away from the old ground will require to be more seriously considered - the most obvious avenue for such a move being to nearby Ravenscraig where building blocks of what will be a new town are beginning to be put in place.

And how Motherwell might find the funds to finance either of such outcomes, I'm sure even the Motherwell board of directors would love to know the answer to that little poser!

Motherwell Season Preview - Is European football a possibility? 3 years ago

Haste Ye Back! 9 years ago

Are Scottish Clubs Shooting Themselves In The Foot? 9 years ago

Full of Eston Promise 10 years ago

A Passion Called Motherwell 10 years ago
//