Eastern European football outside of Russia has been on a steady climb since the fall of the Soviet Union over two decades ago, a statement supported by the success of former Soviet teams such as Dynamos Kiev and Tblisi, Shakhtar Donetsk and BATE Borisov. Nations formerly part of the 'Eastern Bloc' of Communist countries under the control or influence of the U.S.S.R have since rivaled and even surpassed Russia on the national stage, a feat produced only a handful of times during the hundred years previous. Former Yugoslav countries Serbia, Slovenia and Croatia have all bettered Russia in qualifying and final tournaments, while the Czech Republic and Slovakia were at the forefront of Eastern European football for much of the time since the dissolution of Czechoslovakia. 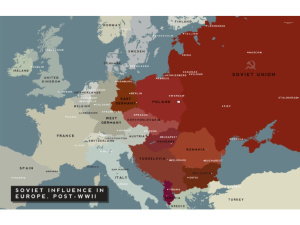 Throughout the 20th Century, especially the latter half, football experienced several matches which superseded exhibition to the point that they became some of the most poignant moments in national identity. I recently read a paper by Dr. Seweryn Dmowski, of the University of Warsaw, in which he discussed such matches. Entitled "Lieux de Mémoir in Eastern Bloc Football", it delves into encounters between nations who were drawn against each other by their beliefs as much as football. Among his examples was 1972 Olympic semi-final between Poland and the U.S.S.R, which came 20 months after the protests against sudden hikes in food across Poland were brutally put down by the Polish People's Army, acting under the instruction of the Soviet government. Kaimierz Denya's brace secured a 2-1 victory for Poland, who went on to beat fellow Soviet underlings Hungary 2-1 , with Denya once again scoring a brace. While lost in history among the catastrophic events of the Munich Olympics, the victory over the Russians marked a minor blow against their actual leaders, in a time where public outcry against the U.S.S.R were met with a quick and brutal reaction.

As unimportant as these sporting victories were in the grand scheme of things, they were duly celebrated by those outside Russia living under the rule of the U.S.S.R, because despite the occasional upset by their subordinates, the Soviet Union's national football team were the dominant force in Eastern European football during the 20th Century. Their record is outstanding: they placed third in three consecutive Olympic Games, and won gold twice. They won the European Championships in 1960 and came fourth in the 1966 World Cup, and they topped the ELO World Rankings for a total of 8 years between 1963 and 1990. Throughout this highly successful period in Russian footballing history, however, the Soviet Union were the beneficiaries of extremely talented players from Eastern Bloc countries. Five of their ten most capped players were born in countries outside of modern-day Russia, as were their two highest goal-scorers, Oleg Blokhin and Oleg Protasov, the former now managing Ukrainian side Dynamo Kiev. Without such players, the Russian era of extraordinary sporting success would have been significantly less impressive. 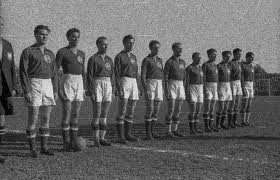 It was vital to Russia that their performances against their satellites sent a message of Soviet dominance to the fans of both nations, and thus a tacit understanding was established between the U.S.S.R and the Eastern Bloc countries. This understanding is reflected in the statistics of those countries when facing the Soviet Union. Yugoslavia record only one victory over the Soviets in the 20th Century, in the first leg of a Nehru Cup tie, although they lost the second leg by a margin large enough to see the U.S.S.R go through. Hungary won just four of their 21 encounters with Russia, and were victorious only once during the 'Mighty Magyars' era. However, the most blatant message sent by the Russian government came in 1953. CSKA Moscow were set to play Yugoslavia, in a game shrouded in political intrigue. The Red Army team were instructed by Stalin himself to send a message to the Yugoslavians, who were close to a breakaway from Stalinist communism in favour of the model encouraged by Josef Tito. CSKA ended up losing and had to return to Moscow ignominious to face the wrath of Stalin. The Premiere transferred the majority of the CSKA to the 'State' team, Dynamo Moscow, to learn how to be "true soldiers". 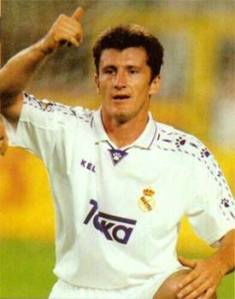 Suker in his Real Madrid days

Since the dissolution of the Soviet Union, Eastern European countries have enjoyed varying degrees of success in European football. While countries such as Poland, Serbia and the Czech Republic, who were sovereign from the Soviet Union in the sporting field, have had national sides for a century and thus were able to grow independently, while annexed states such as Moldova and Belarus didn't exist as political entities, thus restricting their players to play either for the Russian national side or no national side at all. These political restrictions are reflected in the gulf in success between Eastern countries. Of the 'Satellite States', Croatia have enjoyed the most success. Currently placed fourth in the FIFA World Rankings, Croatia have produced a steady inline of talented players since their independence from Yugoslavia in 1991. Players such as Davor Šuker, Zvonimir Boban, Ivica Olic and Luka Modric have all impressed in European competitions for top clubs, and helped Croatia reach the quarter and semi finals of the European Championships and the World Cup respectively. The Czech Republic boast similar statistics, having come second in the European Championships in 1996, although they have only ever appeared in the Group Stages of the World Cup.

The 'Satellite States' record is remarkably worse. Aside from Euro 2012 co-hosts Ukraine, the former 'Satellite States' have qualified for the Group Stages of a major tournament just once, when Latvia were eliminated in the 2004 European Championships. While the Soviet rule over these nations was severely detrimental to the development of their football associations, the U.S.S.R did instill a vision across the vast nation. The establishment of Voluntary Sport Societies (VSS) by the Sports Cabinet has left an impression on Eastern football still visible today. CSKA, Dinamo, Torpedo, Red Star (Krasnaia Zvezda) Metallurg and Shakhtar teams were all founded as part of the VSS system by various sectors of society (for example, Shakhtar was mining, Metallurg was metalworks), and imposed the club structure still present in Eastern European football.

It is fair to say that Soviet rule was a double-edged sword for football in the East. On the one hand, it established organised association football and a coaching method which has stood the test of time and constructed a sturdy base point from which football in the Eastern Bloc has grown. On the other hand, however, the Soviet desire for victory blocked individual development throughout the Satellites, something which has hindered them for 20 years and cannot be brushed aside when considering failings in the Eastern Bloc on the World Stage.

Leamington vs Coventry City: How to watch, kick-off time, team news, ones to watch and previous meetings in PreSeason Friendly 2022 3 hours ago

Mustafa Tasdemir: What the future of the sports agency industry looks like 3 hours ago

Alfie Roberts: Importance of family, the poison of social media, and the greatest job in the world 2 days ago

What will Dan Ballard bring to Burnley? 4 days ago