Southampton's perfectly executed game-plan put an end to Manchester United's 10 game unbeaten run, who failed to have a single shot on target despite 70% of possession.

The Saints' first win at Old Trafford was secured with the only shot on target from substitute Dusan Tadic after Graziano Pelle hit the post.

Ronald Koeman's side leapfrogged Louis van Gaal's side with an outstanding defensive performance, especially from Morgan Schneirderlin in midfield. Just ten points behind the league leaders they now have the advantage in the race for third. 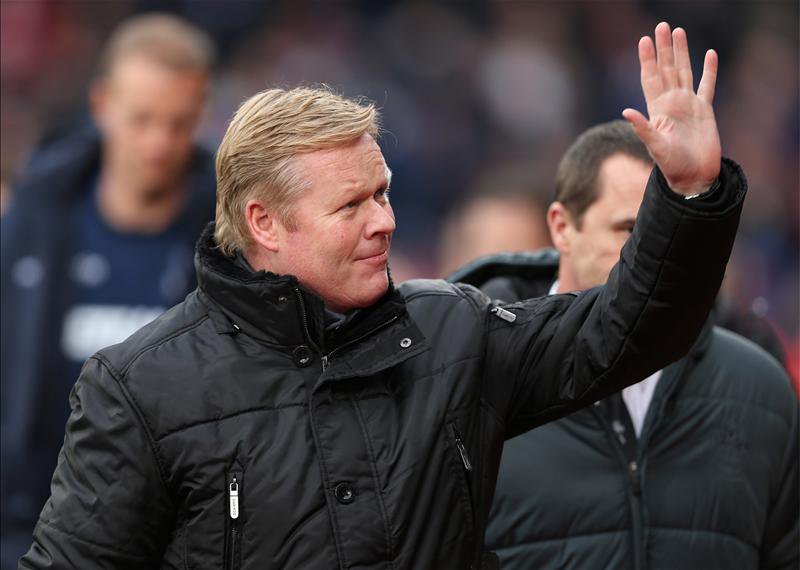 For the first time since May 2009, United failed to have a shot on target and for the first time in Premier League history they lost to Southampton at home. It was another controlled performance from the Reds, unlike when they won at St Mary's last month, but they failed to get in behind a brilliantly organised Saints defence, led by Jose Fonte.

It took only five minutes for United to regain some calm to Old Trafford, Luke Shaw took one too many touches as his former teammates pipped the ball from his feet before Angel Di Maria earned a costless-kick for Wayne Rooney to whip into the box.

The Argentine followed it up with an inswinging corner towards Robin van Persie before probing with the ball at his feet into the Saints box and curling a delicious ball just too far in front of United's formidable attack.

Ronald Koeman's high intensity pressing came to no avail as Manchester United settled into only their second home game in the last six games. With 10 minutes gone a United side with Daley Blind and Michael Carrick together for the first time had a 93% pass completion rate.

Michael Carrick's lovely chipped ball for Valencia was mimicked by the recipient but Jones, running out from centre back to the Saints byline, couldn't reach the lofted ball.

Louis van Gaal described Manchester United only having one injury for Sunday's game as 'crazy' and it improved as Southampton were forced into a change just after the twenty minute mark. Toby Alderweireld, returning to the centre after injury to Clyne forced him out wide during the festive period, tweaked a muscle as he cleared the ball and Florin Gardos came on to partner Jose Fonte at centre back.

United's frailties showed, of course, as Southampton earned a corner. Steven Davis floated the ball to the back post after a short corner taken by Wanyama where Michael Carrick gifted Jose Fonte a path for which he jumped over Phil Jones and headed wide.

A quick, incisive break away from United on the half hour mark was wasted by Valencia in typical fashion of the games first half hour, which failed to bring any shots on target to the fray.

Florin Gardos, on for Alderweireld, settled down quickly in a very loud Old Trafford and as Antonio Valencia burst through the Southampton defence, traditionally hard to break down, the 26-year-old sycthed down the ball to only give United a corner.

With the corner wasted, United traveled down the right side with Valencia once more. The Ecuadorian drew in the foul from Ryan Bertrand who fell into his trap to recieve a booking. 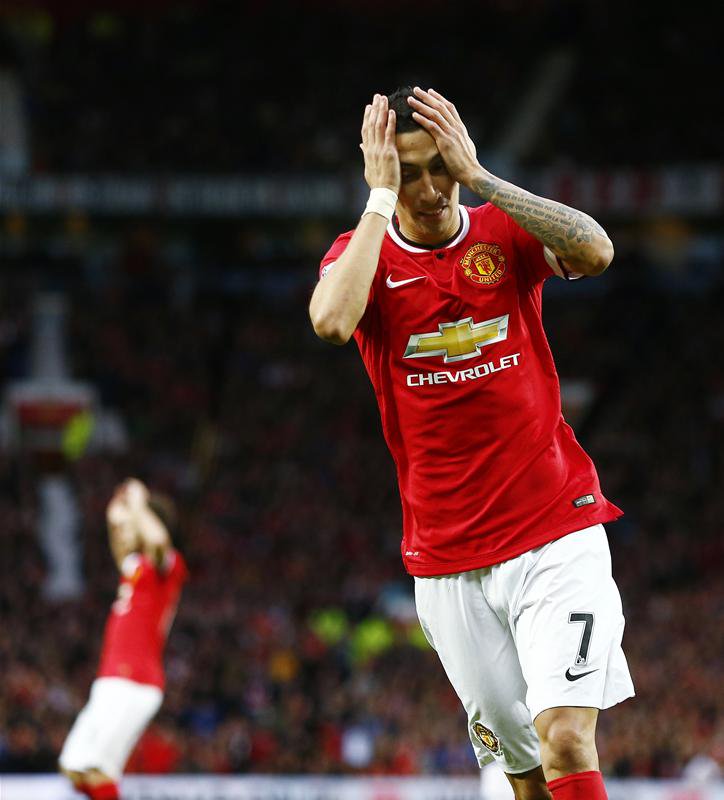 Robin van Persie closed down Gardos and lifted a ball over the Southampton defence for Di Maria whose control let him down, forcing him to drift wide and cross into the hands of Fraser Forster.

United walked down the tunnel having been on top for a large chunk of the first half. Rooney finished the half off with a bulldozing run through three Saints defenders but Robin van Persie could only force Forster to palm it away. Di Maria's half-hearted shot from the edge of the area hardly deserves a mention yet in a humdrum half, that changes.

James Ward-Prowse had an opportunity to power one of his superb deliveries from a corner earned within a minute of the restart and the aftermath saw Graziano Pelle slam a shot into boot of Shaw.

The intensity of Southampton's pressing diminished as United saw the second half out in possession but the whole game's intensity took a turn for the better as the teams switched ends. Rooney's costless-kick was dealt with comfortably in the crowded Southampton area and United's crisp passing on the break could only tire Bertrand's and Clyne's legs, not cause any worry to the finest defence in the league - on statistics.

United's passing saw the possession statistics rack up but only neat play from Luke Shaw towards the run of Angel Di Maria could create anything of note, and even that dissolved after a low cross from the left hand side. 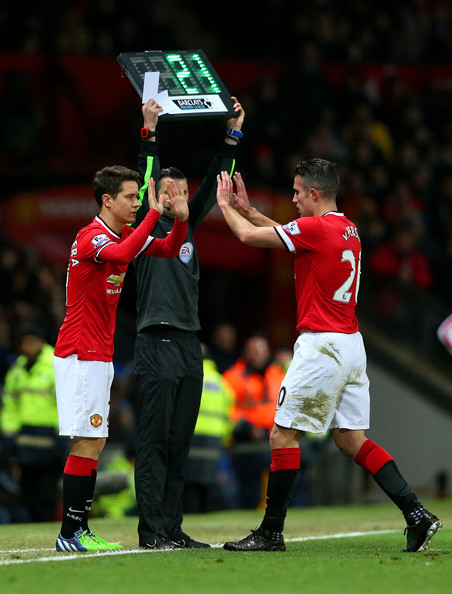 Van Persie's loss of possession to Fonte saw him frsutrated again and booked before he headed off straight down the tunnel with the physio and Ander Herrera came on.

Dusan Tadic came on for debutant Elia who adjusted well to the Premier League in his first game. The change took 4 minutes to make after Tadic left his shirt and shin pads in the changing room.

Tyler Blackett's introduction was very speedy though as Luke Shaw jogged off, presumably due to a lack of match fitness following copious injuries. The young Manchester born defender took his place at left centre-back with Daley Blind shifting left to Shaw's wing-back position. 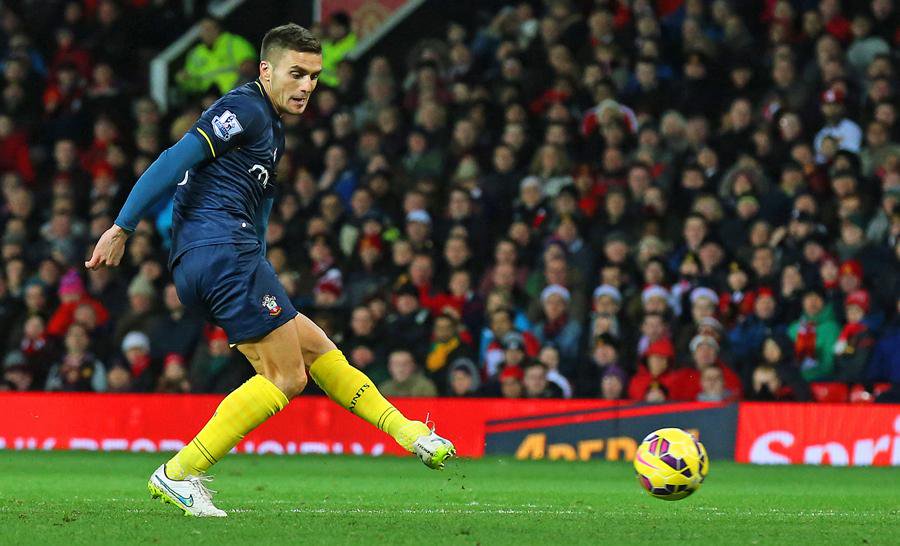 Arguably against the run of play it was Ronald Koeman's eyes who lit up as the ball hit the back of the net. Dusan Tadic's little lay-off to Pelle was a smart move and as the ball ricocheted off the post Tadic reacted with speed, slotting the ball past De Gea and the sliding Tyler Blackett.

Despite losing the ball on three occasions Angel Di Maria provided United with a spark for Southampton to be very wary of, yet after returning from injury just last week the Argentine was taken off for Marouane Fellaini.

Juan Mata was on the end of a stamp-like tackle from Dusan Tadic and earned a costless-kick to deliver himself as Fellaini lurked on the edge of the box. Yet it was Blind who headed it, and to no avail.

The ball then dropped at the Spaniard's feet after Daley Blind's cross, hard to deal with, was flapped down to Mata's feet by Fraser Forster. Yet on his weaker foot the ball could only dribble past the left post.

Just minutes later Mata had another chance, this time he had time to prepare himself as it arrived from the left flank. Yet despite getting in behind the Saints defence, unlike any United player could manage in the 78 minutes previous, he smashed it over the bar.

Fellaini's take downs from the back three's lofted balls added a much needed quickness to the game for Manchester United and as he splayed it to the right flank, Mata charged into the area and slammed Valencia's ball downn into te floor on the volley and it looped past the post, a third chance missed by the £37 million signing.

Despite a rapturous cheer for United's third corner of the game and a good delivery from Wayne Rooney, there was nothing even remotely worrysome about it like so many United corners this season.

Another large cheer came as Phil Dowd relayed the message that five minutes was added on but there was no added urgency from United's back three who took their time to play the ball out of the United half.

Yet the polar opposite came at the other end of the pitch as Daley Blind wasted a chance with a very lengthy ball into the box and into Fraser Forster's gloves.

Dusan Tadic secured the victory with beautiful skill to earn a corner and even a huge kick from Tyler Blackett was headed out with ease and as the final whistle went Tadic knew he had created history with his goal in the 69th minute. 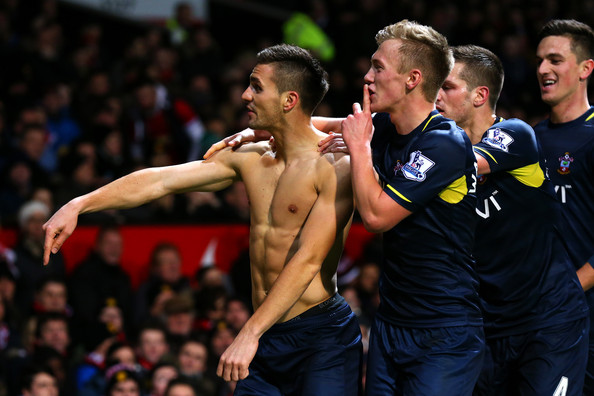 Saints are staying up was the joyous chant of the Southampton fans who had traveled the country to Old Trafford to see their side win at the famous ground for the first time since 1988.

While Tadic scored the winner, it was Southampton's defence and midfield that won the game for Ronald Koeman. Morgan Schneiderlin put in a man of the match performance, orchestrating attacks from a deeper position and at the centre of an excellently executed excellent game-plan.

The Saints are staying up and they're moving up the table as well. Leapfrogging Manchester United to sit in third, they're just 10 points off league leaders Chelsea. Manchester United stay in the top four but miss out on the chance to gain two points on local rivals City, who drew yesterday.