After taking the World Cup by the scruff of the neck, the summer was rife with rumours surrounding James Rodriguez and Juan Cuadrado. Yet while an 80 million euro move was quickly dealt with for James, Cuadrado failed to make a move despite strong suggestions that he had signed for Manchester United.

In fact, rumours suggested that a deal was 100% completed at least four times for Cuadrado but due to the lack of appearances for Louis van Gaal's side something seems false about the rumours.

Now, it seems Cuadrado is set to get his move which he seemingly desired throughout the summer transfer window. He is top of Jose Mourinho's wanted list for January transfer window and is in talks with the club, as per SkySports.

Playing in Serie A does not lend itself to many English football fans who disregard the league due to 'boring football'. Yet Cuadrado is anything but 'boring', creating 2.18 chances a match this season.

The Colombian had a stunning World Cup in football's 'second home' alongside James Rodriguez and while James receives the plaudits for his brilliant performances at the heart of the Real Madrid attack that won 22 consecutive games, Cuadrado is well worth the plaudits.

The key to his play is his dribbling which was showcased in Brazil with four assists in five games thanks to crosses from the right and left in towards Jackson Martinez and Carlos Bacca.

Yet the key for Chelsea, who already have players who can stick the ball in the box, is the key passes he provides with a pass success rate of 86.6% in Serie A this season. With 2.2 key passes per game he outclasses Andre Schurrle who Mourinho is looking to sell to fund the Cuadrado purchase, who has made an average of 0.4 key passes per game and created just less than one chance a game last season.

Not only attacking wise does Cuadrado vastly improve Chelsea but defensively he puts in an average of 2 defensive actions a game, one more than Willian.

Willian is another player to be sold by Mourinho as Cuadrado arrives at Stamford Bridge. Cuadrado wins 6% more aerial duels than his counterpart. Again, Cuadrado trumps him in chances created as well as pass success rate and goals scored and of course, assists.

Now that we have ascertained that Cuadrado easily trumps both of the players he is supposed to be replacing, it is unclear whether he will challenge Eden Hazard's status as the key attacking player in the side.

The Belgian and the Colombian both have a 56% shot accuracy while their pass success rate is just 2%, Hazard winning the battle. Hazard creates more chances per game by 0.5 a game. Yet Cuadrado takes more shots per game at 3.1. The Colombian clipped the post in the quarter-final against Brazil in his last involvement in the competition to almost give Colombia a lifeline and while he didn't it was a moment of expectation as he hit it from 25 yards out, such is the quality of his shots.

Hazard, like Willian and Schurrle, falls behind Cuadrado in defensive actions. In fact, Cuadrado impressed so much in a defensive role for Fiorentina that he was played at right wing-back twice the season. However, that defensive ability comes at a cost for Mourinho with Hazard having 4.8 successful dribbles a match and Cuadrado only 2.5.

It seems that with Cuadrado available to play in the Champions League with Fiorentina only reaching the Europa League this season and Mourinho's insistence to buy him in this transfer window and not in the summer, the Colombian has been signed to strengthen Chelsea's chances in Europe.

And that he will do with the strength and talent to his play. With him and Hazard twinning on the wings Mourinho's chances of finally winning Europe's top competition with Chelsea may seem more of a reality. Andre Schurrle and Willian are brilliant players to have available at points but the purchase of Juan Guillermo Cuadrado shows Mourinho's insistence to be the best in the World not just the best in England. 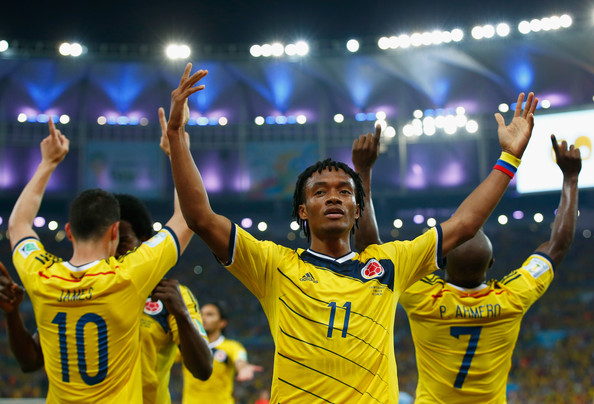 The Warmdown: Off-day for Everton sees unbeaten start come to an end 18 minutes ago