After becoming The Gunners' second signing of the January transfer window, following the arrival of Polish wonderkid Krystian Bielik, Arsenal manager Arsene Wenger has given his own public vote of confidence, saying that his new defensive addition to the side will adapt and become a big star in the Premier League.

Gabriel Paulista was officially unveiled as an Arsenal player on Wednesday afternoon, after the formalties of the deal were completed and his work permit was granted; with the 24-year-old Brazilian defender joining the 2014 FA Cup winners from La Liga side Villarreal for around £12million pounds.

Much expectation has been gathered about Arsenal's defensive frailties in recent seasons, with many critics suggesting that Gabriel could either be a big success in England, or turn out to be a flop. A hefty price-tag, of £12million, is unlikely to have fazed Wenger and his side in their pursuit to sign the impressive centre-back, although criticism is shortly followed.

With the current defensive pairing of Per Mertesacker and Laurent Koscielny at the back, The Gunners look relatively comfortable on the surface. With that being said, Arsenal have been shaky at the back and it has been said on numerous occasions that defensive reinforcements are needed. Calum Chambers and Hector Bellerín are just a few of the current crop who are forcing their way into the first-team, with Gabriel sure to try and make his mark upon The Emirates soon enough.

Wenger himself, had this to say on the move: "He is a promising Brazilian defender. Just 24 years old and we got the work permit; he has good pace, is good in the challenge and is tall, so he can adapt to English football. Maybe it will take some time to adapt completely, but overall it is very good to have him. This season he has played every game for Villarreal and we have seen him many times - we are convinced about his quality. 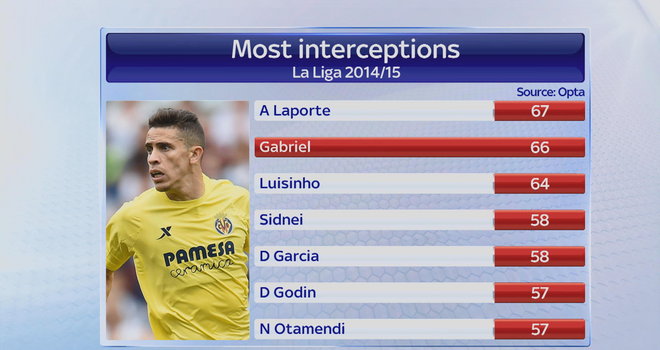 He is very ambitious, focused and serious. That is important at a club like ours - you need to have a complete focus on your job. He has that. Gabriel can also play right-back and left-back, and that is of course a good quality as well."

Per Mertesacker: Top three moments a day ago

Per Mertesacker: Captain, Leader, Manager a day ago

Pierre Emerick-Aubameyang: Slow start is nothing to worry about 2 days ago

The Warm Down: Manchester City 1-0 Arsenal 4 days ago