The 26-year-old has signed a 4-year-deal with the fee believed to be around £26.8m for the Colombia.

Cuadrado has been linked to the Blues for the past few days and as the deadline approached the signing was confirmed.

Cuadrado said: "I am very happy and thankful for this opportunity I’ve been given. This is a great club and honestly it is like a dream to join the Chelsea family and to know that the manager believes in me. I’m happy."

Fellow title challenges Manchester City signed Swansea striker Wilfried Bony for big money earlier this month and Chelsea have responded with a signing of themselves.

The World Cup star's fee took the spending for this month's transfer window over £100 million.

Cuadrado posted a goodbye message to the Fiorentina fans who he has entertained for the past three years.

The added pace and quality on the wing shows just how determined Joe Mourinho is to conquer not only England but Europe as well.

Cuadrado joins an attacking line-up of Eden Hazard, Diego Costa and Oscar, making Chelsea one of the most fearsome teams in Europe.

He will be available to play for the Blues against Aston Villa in the Premier League next weekend and is expected to begin training tomorrow. 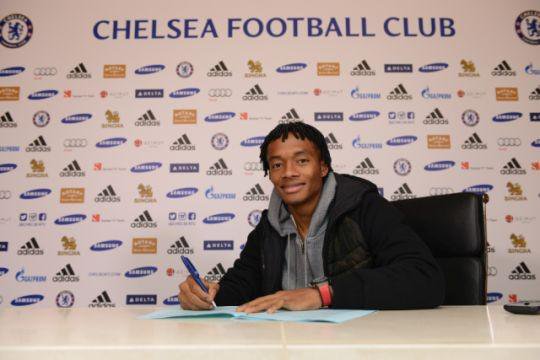 The winger has scored 4 and assisted 4 this season for Fiorentina in 17 appearances and has the build to compete in the Premier League.

Chelsea vs Sevilla Preview: Blues look to kick off UCL campaign in style 2 days ago

Kai Havertz: The story behind the man with the £72 million price tag 4 days ago

Branislav Ivanovic: An influential figure not given the credit he deserves 4 days ago

How would "Project Big Picture" affect Chelsea 6 days ago

Fernando Torres: A Retrospective Chelsea Hero or An Overpriced Flop? 7 days ago

Mendy arrival does not mean Kepa exit 12 days ago