Robin van Persie has completed his move to Super Lig side Fenerbahce after three years at Manchester United.

The Dutchman has signed reportedly four-year deal with the nineteen time Turkish Champions, who finished second to Galatasaray last season.

In three seasons at United, he played under three managers and guided the Reds to a Premier League title in his first season, winning the golden boot for the 2012/13 season in Sir Alex Ferguson's final year.

Fenerbahce confirmed the move on their official Twitter account as they tweeted out van Persie's quotes on the move, the Dutchman saying "I cannot wait to meet the fans". 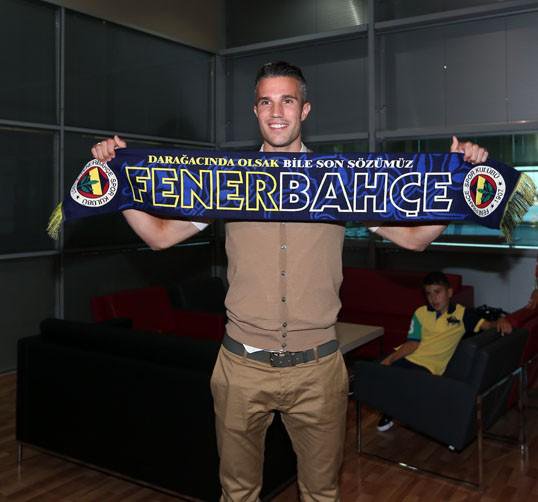 Van Persie has been in and out of the United starting eleven for the past two seasons, however, with injury badly affecting his second and third season at Old Trafford.

Fenerbahce are widely regarded to have pulled off a brilliant deal for the Netherlands record all time goalscorer, signing him for around 6,500,000 euros, according to Gianluca Di Marzio.

It is the Turkish side's second signing from Louis van Gaal's United side this summer, having confirmed the signing of Nani on Monday.

Van Persie will be delighted to have a guaranteed starting place in a successful side ahead of the European Championships in France next year, with Danny Blind becoming Netherlands' new coach, his place in the side is not secured.

In his first season at United, he showed his incredible quality and will be remembered as one of the best striker's in the Premier League era, moving to Old Trafford for £24 million in 2012.

He scored 26 times in his first season, while playing in every single one of the league games as he was the difference between Manchester United and Manchester City in the 2012/13 title race.

His second season was less prolific with 12 goals scored in 24 league games under David Moyes but the magic was still there. He saved United's skin against Olympiakos in the Champions League round of 16 second leg as a hattrick secured a place in the quarter-final following a 2-0 first leg defeat.

That amount of goals decreased to just ten under Louis van Gaal last season as he played just 29 times in all competitions, far less than in his first season.

His departure was expected by most United fans but the memories of his first season, one of stunning attacking play and an incredible partnership with Wayne Rooney, will be remembered for a long time.

United will now have to search for a striker, with Rooney and James Wilson the only two currently at the club, and Javier Hernandez expected to be sold or loaned out soon. Radamel Falcao was sent back to Monaco before moving to Chelsea after an unsuccessful season-long loan spell at Old Trafford.

Names such as Karim Benzema, Robert Lewandowski, Edinson Cavani, Thomas Muller, Harry Kane and Alexandre Lacazette will be linked with United over the coming days but it is a tough task to find someone who is available for an unridiculous price this summer.

The Warmdown: A final at last for Solskjaer 8 hours ago

Ole Gunnar Solskjaer's post-match comments: The final, David De Gea's fantastic performance and both legs of the semi-final 8 hours ago

A.S. Roma vs Manchester United: Team news, ones to watch, predicted line ups, kick-off time and how to watch a day ago

Any protests should be civilised but fans must be heard, urges Solskjaer 3 days ago

Manchester United vs Liverpool preview: How to watch, kick-off time, team news, predicted lineups and ones to watch 6 days ago

Man United eye Cristiano Ronaldo return with the Portuguese planning route out of Juventus&nbsp; 6 days ago

Solskjaer ahead of Liverpool clash: 'Whatever the result does to Liverpool cannot be of our concern' 8 days ago

Solskjaer confident of board backing and has received 'great support'&nbsp; 8 days ago

The Warm down: United have one foot in final after second-half masterclass 8 days ago