The 2015/16 summer transfer window has been finally closed. 15 players were let go - either loaned or sold - by Louis van Gaal. On the other way, 7 players were signed by the Dutch manager.

Manchester United's main issue - in four 2015/16 Barclay's Premier League games played - is finding the back of the net. And it was no surprise for us that a new striker is arriving at Old Trafford.

For the majority in world football, the surprise was Anthony Martial's arrival from AS Monaco FC, as the deal has been contradictorily described as a bargain buy, a risk and too much money for a 19 year old teenager.

Now that the deal is complete, Martial is already an official Manchester United player who will be wearing the number nine shirt left by former club striker Radamel Falcao.

In four league games, the team has only been able to score three times with one of them being an own goal. A huge improvement area for Louis van Gaal to concentrate on, and hence, came the signing of the French international.

Martial's arrival means possibilities for Louis van Gaal, especially in the final third of the pitch. As described by the Dutch manager, he is "naturally talented, young, multi-functional forward with great potential".

With his multi-functionality, Anthony provides his services as a centre-forward or on both flanks of the final third, proving the manager with options. 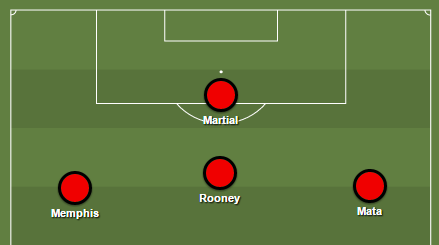 This way, Rooney will be playing in the number 10 position whereas Martial will be deployed as a centre-forward (number 9). A promising shape to provide the Dutch manager with goals.

Juan Mata's creativity on the right and Memphis' speed and penetration on the left could become key to this shape.

During the course of the match, players can switch positions to provide more options. Whereas, Rooney can be switched to number nine, Mata as number 10 and Martial on the right flank. 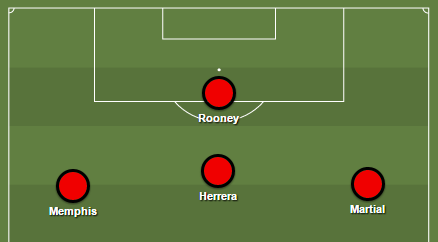 What does this shape really solve? Manchester United's main problem in the final third has been dealing with the opponent's tight defensive areas. In other words, penetrating and passing the ball within those areas.

In the above shape, Wayne Rooney is deployed as a number nine, with Herrera (or even Mata) playing in the number 10 role, leaving Martial and Memphis doing their job on the right and left flanks providing the team with the needed take ons, dribbling and penetration to deliver the goals.

Now that Manchester United have the goal scoring midfielders, it s also possible to play in a 4-4-1-1 formation with Rooney playing in the "nine-and-a-half" position. This way, either Mata or Herrera can be deployed in the number 10 position. On the flanks, it could be Depay (on the left) and Mata (on the right).

A competition with James Wilson

Two 19-year-old teenagers and two prospects for the future of Manchester United.

Now that Wilson is staying at the club this season, we shall expect a healthy competition between the two as they will be fighting for a guaranteed place in the starting XI.

What has the French international done in the Ligue 1 last season? Let's take a look and compare his last season's stats with Manchester United's main strikers.

The Warmdown: Man United put in team performance to win in Paris an hour ago