Manchester United under-21s looked disciplined and a class above Everton under-21s as they scored three with just one in reply at the Leigh Sports Village in Manchester.

James Weir opened the scoring for Warren Joyce's side, combining beautifully with James Wilson who poked him through to finish past Hewelt.

Wilson then added one to his tally minutes later as Josh Harrop snatched the ball from Everton's slow possession-focused defence before Wilson strode forward and finished well, showing his first team pedigree.

Captain Jesse Lingard sealed the win for United, tricksing past his defender before curling a good strike around Hewelt for United's third.

Calum Dyson, prolific last season for The Toffees, got one back for Everton with just over fifteen minutes to go, heading past Sam Johnstone after a good cross from Jonjo Kenny. 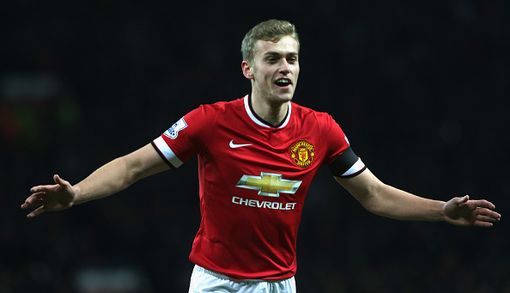 Jesse Lingard came close in the 5th minute after possession consistently changed hands. Sean Goss, who traveled to the US on tour with the first team alongside Lingard this summer, picked him out beautifully, with the ball landing perfectly in his path. Lingard, 22, tried to dink the goalkeeper but with too much power hit it past Mateusz Hewelt and over the crossbar.

Another player close to the first team, James Wilson almost gave United the lead as the Reds dominated chances in the opening ten minutes. Axel Tuanzebe, Young Player of the Year at United last season, put in a good, powerful cross to Wilson who could do nothing but touch it and hope for the best, trickling wide.

Both sides looked good defensively in the opening stages, with only United bringing real attacks to the game. Donald Love made a powerful but controlled challenge on the left flank as Everton looked to burst down it, but United's counter attack was snuffed out by the Toffees.

It appeared to require individual brilliance to snatch a goal from two good defences and Calum Connolly looked to provide that with a long range shot at Sam Johnstone, who played for the United first team during pre-season.

Individual brilliance can always be substituted for a great one-two as United showed. James Weir strode towards the penalty area, offloaded it with a short pass to Wilson who poked a superb ball to the on running Weir, moving past two defenders. The finish was equally as good as Wilson's pass and United looked comfortable with their lead.

It didn't take long for United's confidence and Everton's hesitancy to see the Reds double their lead. Focusing on playing the ball out of defence Josh Harrop pressed well and snatched the ball off the dithering defence, Wilson picked it up as it bobbled away from Harrop, swept onto the edge of the penalty area and finished cleanly past Hewelt.

Matthew Pennington went down injured after a challenge from Wilson, landing awkwardly and had to come off for

Callum Dyson had a poor effort slice wide after getting past Tuanzebe on the edge of the area.

Harrop, assisting the second goal, picked up the ball on the halfway line and sprinted, dancing through the Everton half, to the area where his finish didn't match and was caught by a diving Hewelt.

Lingard noticed space as the game slowed to a walking pace and unleashed a powerful shot but it whisked past the post and wide. Everton's best chance came as the half was drawing to a close, with Hernan heading to the left corner but Johnstone saving well.

No changes came from Warren Joyce for the second half, indicating that none of the starters would play for the first team on Wednesday against Ipswich Town.

Harrop started the second period like he ended the first, with a great run and turn but a poor end product, leaning back while striking the ball to see it rise above Hewelt's goal.

United as a team began again, confident in posssession and refusing to sit back with possession, striving forward. Jesse Lingard picked up the ball after United sent Everton's defence dizzy with some great passing. Lingard, captain on the day, secured the win for the Red Devils with great footwork on the edge of the box before finishing well with a curling effort past Hewelt just inside the area.

Lingard almost doubled his own tally, shooting well with a curling effort again inside the penalty area. Going for the same right corner from the left flank, Lingard's effort was palmed out by Hewet but no United attacker could pounce quick enough.

Both Ryan Ledson and Joe Williams had good efforts saved superbly by Sam Johnstone, who had been quiet but when called into action, provided two great saves.

Harrop had a powerful shot parried by Hewet after Wilson and Lingard combined well in attack but United looked comfortable to relax with the ball with the three goal advantage. Harrop then picked out Weir with a good chipped pass over the defence but his shot went straight at the 'keeper in the one-on-one situation.

As United relaxed, with the attention on the numerous scouts and managers from Championship clubs eyeing up the young United players, especially James Wilson, Everton were anything but relaxed.

Poucning on a loose ball, it was spread widewell to Jonjo Kenney who sent a well-weighted cross to the towering Dyson who headed in easily at the back post to wake United up.

Fosu-Mensah swerved in and out of a few players before having a shot blocked well, and was then replaced by Devonte Redmond who fitted easily into Fosu-Mensah attacking position.

Everton were inspired by the goal, which looked like a consolation, pushing forward with more energy than before. Wilson had to clear a corner for United, who looked far too sloppy and relaxed with the lead than is required by United players.

Chances came for Redmond, looking to finish softly past Hewelt and Everton had their few in the closing minutes but the game died out calmly, with United easily getting the three points. James Wilson showed his class above the other twenty-one players on the pitch throughout the ninety minutes, not justwith his goal and assist in the first half.

Scouts from Sheffield Wednesday, Hull City and Wigan Athletic were present, most likely watching Wilson in particular and he shined again, maing you wonder whether he should be playing for the Manchester United first team.

Both Timothy Fosu-Mensah and Axel Tuanzebe, in the under-18s last season, were thouroughly impressive both on and off the ball.

Have Man United made a goalkeeping mistake? 4 days ago

How many signings do Man United need? 10 days ago

Adrien Rabiot - a solution to Man United's deeper midfield problems or a panic buy? 11 days ago

Erik ten Hag says he is 'totally satisfied with the whole team' ahead of Manchester United's Premier League fixture against Brighton &amp; Hove Albion 14 days ago
//