Louis van Gaal says he's happy with Manchester United's 3-0 win against Ipswich Town in the third round of the League Cup, as Andreas Pereira scored on his first start for the club.

The combination of control of the match, comfortability in holding possession and three superb goals saw Van Gaal have a wide smile on his face talking to media.

"The result was great," says the Dutchman but also, United "don't have any injuries" and "Phil Jones has played a lot of minutes" after returning from injury, "so I'm a happy coach," said Van Gaal.

He says, "I brought in players, I rotated players," but not as much as lower league side Ipswich who made 11 changes. All the key figures in United's side like Wayne Rooney, Juan Mata, David De Gea, Chris Smalling and Bastian Schweinsteiger all started the game. Van Gaal was clearly looking to avoid an upset as he was on the wrong end of last season, MK Dons humiliating his new United side 4-0 at stadium:mk in August 2014.

"Last year we were out in the first game", losing 4-0. "At that time there were a lot of injuries" so Van Gaal "played with [his] second team."

As a result, Van Gaal says, United "went out and the fans were not so pleased." So this time, against another lower league side, Van Gaal says, "I thought I should do it in another way."

Van Gaal wanted to 'make it enjoyable for the fans'

He needed to "make it enjoyable for the fans as well, our own fans," with United playing at home this time. "We have succeeded in doing that and that's a major point for me."

Van Gaal summed it up nicely, "we have no injuries, we have won and we are in the next round." It was also brilliant to see Andreas Pereira score and standout on his competitive debut.

"The free-kick [from Pereira] was beautiful but we know this is his quality" and "that's why he may take the free-kick" instead of Juan Mata or Memphis Depay. 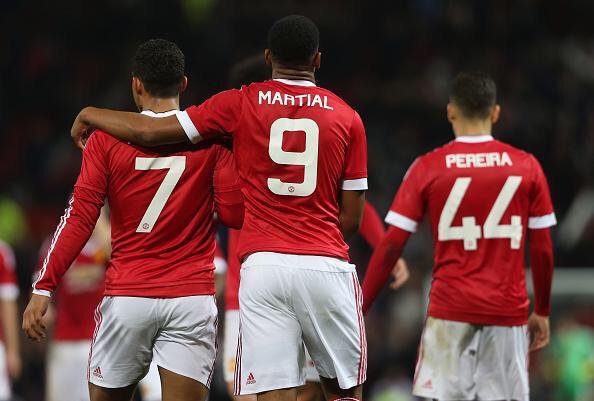 "He [Pereira] had a big participation in that game because he shoots the free-kick in a fantastic way," says Van Gaal. He's also "been training on that" so Van Gaal knew it could come from the young Brazilian. However, "like all other players, there is space for improvement for Pereira."

United now go on to face Middlesbrough in the Fourth Round of the League Cup, another Premier League - Championship tie for the Reds. At home again, Van Gaal will be looking to 'make it enjoyable' for the fans again. Maybe Pereira might become more well-known in the next few months too.

The Warmdown: Man United put in team performance to win in Paris 20 hours ago

A trip down memory lane: That night at the Parc des Princes 4 days ago

Opinion: The biggest winners from Manchester United's victory over Newcastle United 5 days ago

The never-ending quest - who is Manchester United's partner for Harry Maguire? 20 days ago

Key Quotes: Solskjaer looks ahead to clash with Tottenham 21 days ago