As Manchester United resume domestic action this coming weekend, United boss Louis van Gaal would have shuddered at the sight of his £36m man Anthony Martial leaving Wembley Stadium on crutches, following his country's defeat to England on Tuesday night.

Martial was substituted for Antoine Griezmann on 67 minutes versus The Three Lions, but didn't appear to be in discomfort. However, it now appears that the Frenchman sustained a foot injury, that could see the player miss game time in the coming weeks.

Despite the rather dramatic exit by Martial from the doors of Wembley, Les Blues were not too concerned by the injury. French coach Didier Deschamps (as per, The Guardian) described the problem as more of a knock to the top of his foot, and that Martial would be 'fine', despite the player being in some pain. 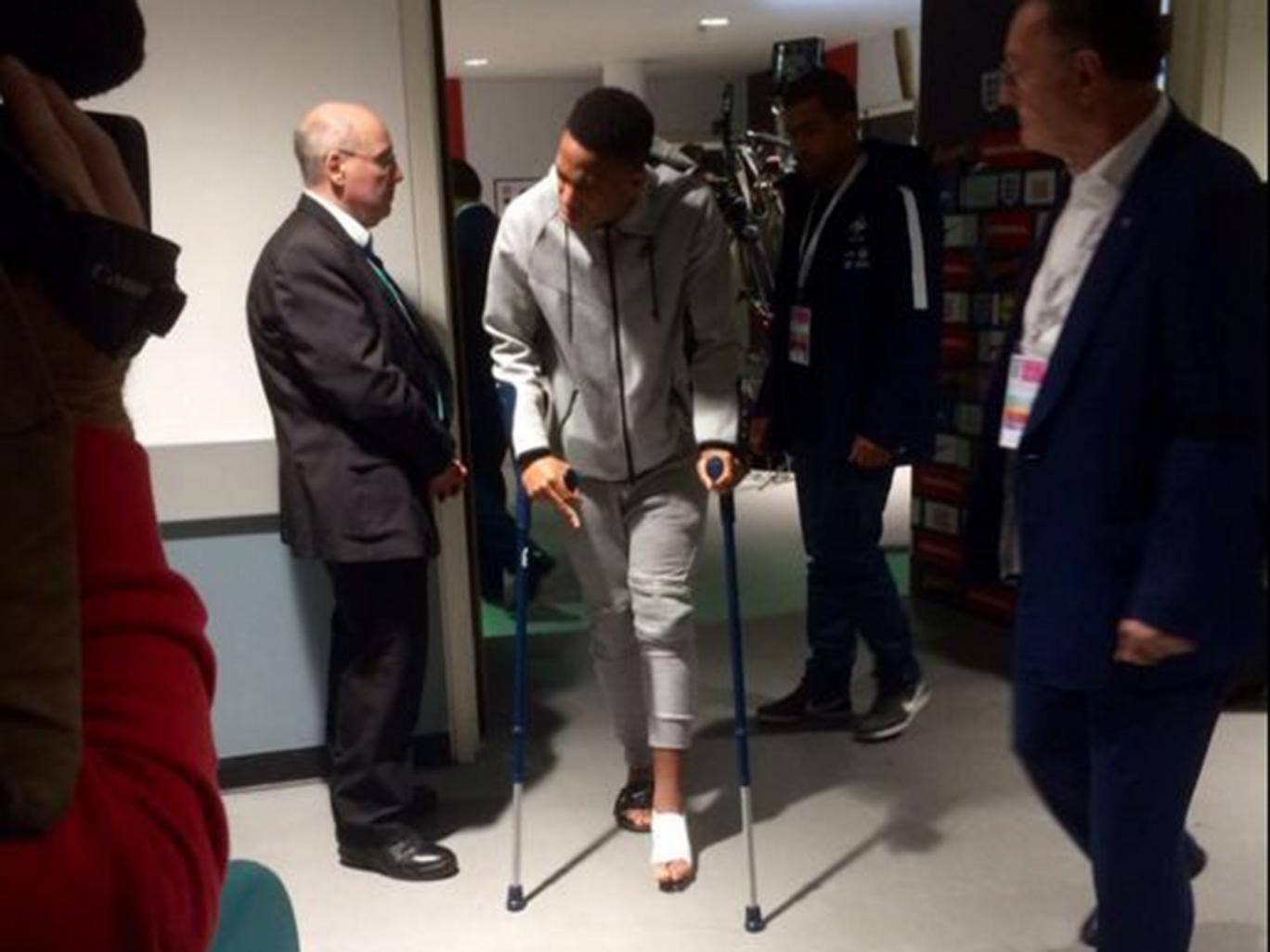 Nevertheless, the concern is there for United, who issued a statement saying the severity of the injury is not yet known and will not be making a comment until Van Gaal's pre-match press conference on Friday, ahead of the game at Watford.

The injury, therefore, means Martial's participation in Saturday lunchtime's game at Vicarage Road is subject to a rather large asterisk next to his name

His presence as The Red Devils near sole-attacking force, with Wayne Rooney's ongoing on-pitch malaises continuing for United - despite his prolific England form - leaves Van Gaal with problems, as they face a Watford side who have conceded just 12 goals in as many games and, whilst at home, have the joint-lowest goal concession record with Tottenham Hotspur and Arsenal, on four.

Should the 19-year-old miss out this weekend and indeed any length of time, Rooney will surely once more lead the line for United. The bigger issue might be who would come into the three behind him. Juan Mata's place seems assured, as does Jesse Lingard's, but with Ander Herrera dipping in and in out of the starting XI, could Memphis Depay regain his starting berth?

Memphis sat out international duty for The Netherlands, despite being recalled to the squad after originally being omitted by Dutch boss Danny Blind. Memphis has not played a competitive game since a 16 minute cameo for United versus CSKA Moscow, but now could be an opportune moment for his triumphant return.

With Manchester United sitting in fourth spot, just two points behind neighbours Manchester City and with a trip to third-placed Leicester City next weekend, Louis Van Gaal will want his best team ready.

News on Anthony Martial's injury is so far sketchy at best. By Friday, more will be known but for his manager Van Gaal, everything will very likely, be kept firmly crossed.

Crystal Palace vs Manchester United preview: How to watch, kick-off time, team news, predicted line-ups and ones to watch.&nbsp; 13 hours ago

Chelsea 0-0 Manchester United: Another stalemate for United against a 'Big Six' side 3 days ago

Chelsea vs Manchester United Preview: How to watch, kick-off time, team news, predicted lineups, ones to watch 3 days ago

The Warmdown: Vocal Henderson commands Manchester United into Europa League Round of 16 6 days ago