It was a stalemate at Old Trafford as Manchester United played out a tough 0-0 draw with PSV Eindhoven.

United started off the brightest with some half chances with Bastian Schweinsteiger, Memphis Depay, Jesse Lingard and Morgan Schneiderlin having half opportunities inside half an hour. Jorrit Hendrix and Anthony Martial had great chances towards the end of the half, but couldn't finish them off.

Lingard had two excellent opportunties throughout what proved to be a quiet second period but once again couldnt find the net it was Marouane Fellaini had the final opportunity but couldn't find the net and United had to settle for the point.

It was United who started the brightest but at a very slow pace, and Schweinsteiger had a superb chance in the ninth minute. After helping with the winner against Watford on Saturday, he tried from 20 yards out but it was easily collected by Jeroen Zoet.

Depay then tried an audacious effort 17 minutes, in trying to curl it in from 25 yards out. but again Zoet was equal to it.

It was Lingard who had the best opportunity when Wayne Rooney played it through to Martial who left it for Lingard - but the touch was too heavy and Zoet collected it at his feet.

Zoet was then called upon to keep the scores level, Joshua Brenet had brilliant so far and was again to head away Marcos Rojo's cross but he could do nothing to stop getting in at the six-yard box from the corner, however the lack of pace made things easier for Zoet who managed to keep it out.

​​PSV had been quiet throughout the beginning of the period but began to creep in towards the end of the half and a had great opportunity in the 33rd minute as Eindhoven twisted and turned in area before it came to Hendrix but his shot was excellently held by David De Gea.

Martial missed a good chance a few minutes before half-time, as Lingard's initial effort was blocked on the edge of the area but it fell perfectly for the French international who fluffed his lines and struck an effort straight at Zoet.

It was United who came flying out of the traps in the second period and it was Lingard once again who had proved the brightest spark so far. Martial played it well into Lingard who managed to get himself, into the area but his glancing header went just wide of Zoet's right-hand post.

The game had began to peter out as the match entered the final 20 minutes, Arias was in acre of spaces before he played the ball into De Jong but Chris Smalling got over just in time to block the effort.

United had an excellent opportunity 17 minutes from the end, substitute Ashley Young picked up Daley Blind's excellent lofted ball at the back post and squared it to Lingard but he wasted the opportunity and put it over the crossbar.

The atmosphere started to become nervous as it entered the final ten minutes and he home side had a great chance four minutes from the end when Rooney played a dangerous ball into the back post, but Marouane Fellaini couldn't turn it in. 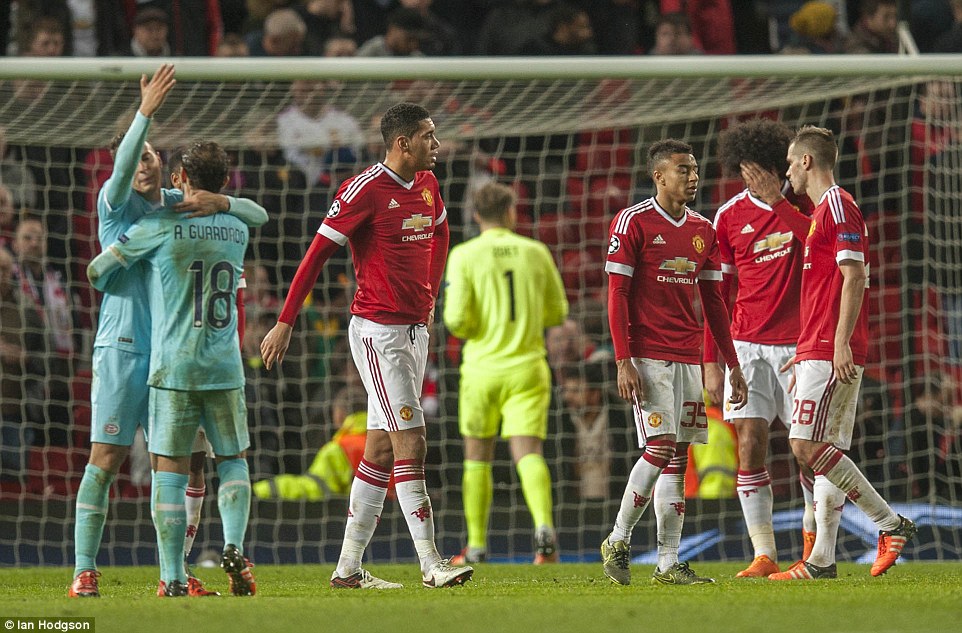 The visitors celebrate a point at the final whistle (photo: Ian Hodgson)

Henderson 'is ready' for Manchester derby, says Solskjaer 9 hours ago

Manchester City vs. Manchester United: Four things to look out for ahead of the Manchester derby 8 hours ago

The Warmdown: Manchester United play out a goalless draw in South London a day ago