Celtic host Ajax on the second last match day of the UEFA Europa League, and it is a competition defining fixture for the hosts who must win or face elimination.

The two teams are growing more familiar with each other since the millennium, having played each other in European competition and friendlies over 15 years and the next meeting could be a season definer for Scottish club.

The match will not be the 60,000 sell-out at Parkhead which this fixture was played in front of a couple of years ago in the Champions League, but the hunger and desire of the fans to win will certainly still be there.

How do both teams enter this crucial tie?

At present, Ajax and Celtic sit 3rd and 4th place in Group A with only one point separating the two teams. Hoops manager, Ronny Deila, will be hoping his countryman, Ole Gunnar Solskjær’s Molde, will do him a massive favour and beat Fenerbahçe, coupled with a victory of his own making to make the Scots and the Turks equal on points before meeting on the final match day. Likewise, Ajax will be hoping last season’s Norwegian champions do the double over their opponents because it will put qualification in their own hands on the last day.

In previous clashes between Celtic and Ajax, the latter has come out on top more times. In all matches played, ‘The Bhoys’ have won twice since the turn of the century, with ‘de Godenzonen’ winning three times. The first leg of this campaign produced the first draw as the game finished 2-2 in what was an invigorating game for the neutral. Celtic opened the scoring in the first half through Nir Bitton but this was soon cancelled out by a well worked Viktor Fischer strike. Then, just before half-time, Mikael Lustig put The Celts ahead. Unfortunately, Deila’s men were denied all three points after going down to 10 men, when Lasse Schöne scored a late equalizer.

For Thursday evening’s fixture, Celtic are without the suspended Bitton and Stefan Johansen whilst it is unknown if captain Scott Brown will make an appearance due to injury. Ajax have a few injury doubts of their own with Thulani Serero, Anwar El Ghazi, Riechedly Bazoer and Daley Sinkgraven all picking up knocks.

Who are the key players?

There are several key-men in both sides that will have to play a major part if they want to see their respective teams get all three points. For Celtic, their goalkeeper Craig Gordon will need to prove that he is up to another big task and show that he hasn’t lost his vital last season form. The Scotland international has been leaking goals in domestic and European competition, but this can also be put down to the shaky defence Celtic have had of late. The main man of this fixture seems to be Ajax midfielder, Schöne, who has scored in the last three ties between Celtic and Ajax. The Denmark international has only the one goal in the Europa League this year and that was match day one against The Bhoys at the Amsterdam Arena.

For the men in charge, it will be a battle of who can apply the better tactics on the night. Deila and Frank de Boer would admit that their two teams do not match up with the ones that played in the previous Champions League fixtures. Ajax have deployed more of a youth system to their starting 11 this season, while Celtic have been criticised for not having a ‘Plan B’ when things aren’t going well for them. The consensus was that the Scottish champions were the better team on match day one, with the red card to Emilio Izaguirre being vital in determining the result. Ajax played a more youthful starting 11 and were overrun by their opponents in Amsterdam. However, a few important changes including the introduction of Schöne, Serero and Arkadiusz Milik turned the tables and had Ajax being the dominant team towards the end of the match. 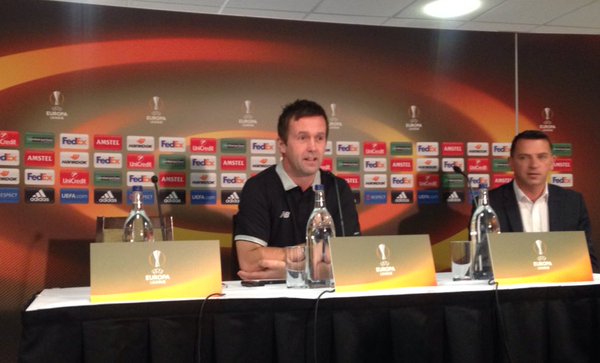 "They [Celtic] have nothing to fear. I want to see energy and I know we have qualities in the team that can win the game for us." - Ronny Delia

The previous domestic games of Ajax and Celtic were polars apart in terms of the results. The Dutch league leaders hosted relegation placed Cambuur and romped out 5-1 winners, while Celtic drew 0-0 with Kilmarnock at Parkhead in what was a tedious match and one that Deila will have to put behind them.

This tie is make or break for both teams - not just Celtic - as a defeat will mean their aim of qualification will not be in their hands on the final match day in a couple of weeks.

Solskjær has said he wants Celtic to progress with Molde and will do what he can to help this along, and that includes beating Fenerbahçe.

If Ajax win in Glasgow on Thursday, and The Hoops don’t get a positive result against Inverness at the weekend, Deila’s managerial position will be in doubt. This isn’t just a big game for Celtic, it’s also a big game for Deila to show he can cope managing among the big boys of European football.

Celtic vs Hearts Preview: Both sides looking to maintain momentum 2 years ago

Celtic&nbsp; Season Preview: Hoops aiming for record-equalling nine in a row 2 years ago

Celtic U17 2-1 Rangers U17: 10 man Hoops hold on to win fourth consecutive Glasgow Cup 4 years ago
The weird and wonderful case of Stuart Armstrong 4 years ago

Celtic FC 2016/17 Season Preview: How will Rodgers fare in his new role? 5 years ago

Luck of the Irish the choice in Lawwell&#039;s Lottery? 5 years ago