Despite having already qualified from Group D of the Champions League, Manchester City's hopes of topping the group took a kicking, as Juventus put in an impressive performance to beat them 1-0.

With head-to-head records dictating who comes out on top if two teams finish level on points, City knew that after losing at home to Juventus they had a job on their hands, and Mario Mandzukic's goal allowed the Old Lady to leapfrog the Citizens at the top of the group, with both on nine points.

Although Juventus were the better side, City did have some chances to level up the game, and failed to capitalise on the good work Joe Hart did at the other end, something which will leave Manuel Pellegrini a worried man.

After being hammered by Liverpool at the weekend, it was understandable that a confidence-shot City started fairly slowly, with little of note going towards the Juve goal early on. Kevin de Bruyne's low ball into the area was cleared as far as Fernandinho on the edge of the area, but the Brazilian could only fire wide.

The same man missed again 10 minutes later, with an even better chance. Another de Bruyne cross was bundled out to the edge of the area, and following Yaya Toure's lay-off, the Brazilian blasted high and wide.

City would live to regret those misses, as Mandzukic rattled home the opener on 18 minutes. Paul Pogba burst through the middle and sprayed the ball out to Alex Sandro on the left, from which the left-back crossed into the area, allowing Mandzukic to escape from Otamendi and place the ball into the corner of the net. 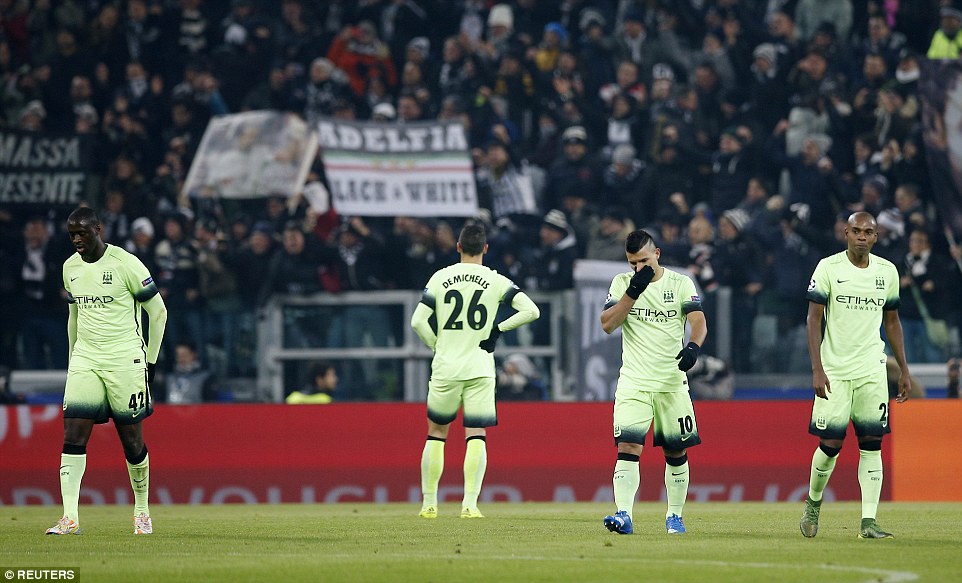 City trudge back to their positions after Juventus score (photo: reuters)

Hart wasn't equal to that effort, but made a fantastic save short of 10 minutes later, to prevent Juve going 2-0 ahead. Stefan Lichtsteiner nodded a long ball down into goalscorer Mandzukic's path, but the Croatian could only see his effort turned brilliantly around the post by City's 'keeper.

Almost shooting his team in the foot before the half-time whistle, Claudio Marchisio was bailed out by his own 'keeper, having given Sergio Aguero a glorious chance. The Italian's back-pass was latched on to by the striker, fresh from a comeback goal on Saturday, but Gianluigi Buffon stood tall to him to push the ball out for a corner.

De Bruyne had been a constant threat throughout the night, as he has often been this season, and another of his dangerous crosses caused havoc as City went in search of an equaliser.

Fernando, an unlikely name, was first to react to the Belgian's ball in from the left, and had Buffon scrambling across goal to push his header onto the post, then gathering the ball before Yaya Toure could pounce on the rebound. 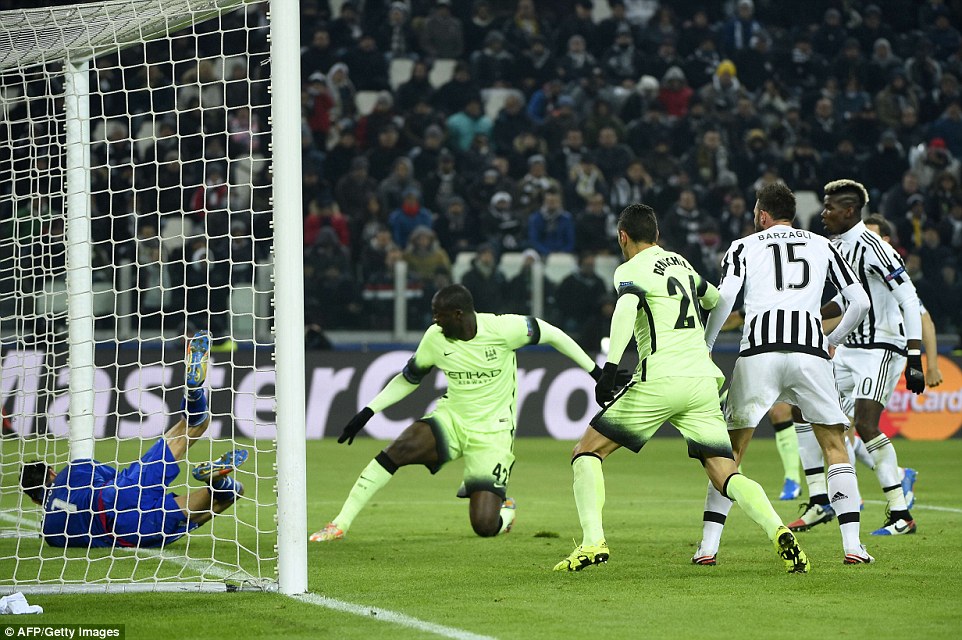 Yaya Toure comes inches away from pouncing on Buffon's save (photo: getty)

Aguero, still recovering from injury, was struggling to make an impact, and his last act of the night was to see a deflected volley go wide. Raheem Sterling replaced him, and missed a huge chance of his own to equalise.

Yet again, de Bruyne was the creator, charging down the right hand side to whip the ball into the box. Sterling was the first to it, but could only slice his effort, which actually deflected wide off Andrea Barzagli, with the defender's intervention taking the ball closer to the goal.

Despite them dropping into a fairly deep defensive shape, the Serie A champions were still proving a threat on the counter attack, and Joe Hart had to be on his toes to keep the score at 1-0. Paulo Dybala raced forward on the break, leaving Sagna and Otamendi on their bottoms, before Hart saved with his feet. It didn't matter though, as Juve saw out the win, whilst that proved to be Hart's last save of the night, as he was forced off with an injury.

If getting their star goalkeeper back for Sunday's clash against Southampton is one worry, another will be the fact that City dropped to second place in the group with a loss.

They'll desperately hope that victory on the final matchday can be coupled with Juventus dropping points, as the Citizens seek to avoid drawing the likes of Bayern Munich, Barcelona and Real Madrid in the first knockout round.

The Warm Down: City leave it late to survive Wolves scare 6 hours ago

The Warm Down: City take first step in Round of 16 6 days ago

The Warm Down: Gunners fall short to Sterling bullet header 9 days ago

Arsenal vs Manchester City Preview: How to Watch, Kick-Off Time, Team News, Predicted Lineups and Ones to Watch 11 days ago

The Warm Down: Manchester City battle hard to knick win at Goodison Park 13 days ago