Stade de Reims drew 2-2 with Stade Rennais on Saturday in a Ligue 1 encounter that was action packed and filled with controversy.

Rennes opened the scoring just before half time through Jérémie Boga but this was cancelled out before the hour when Aïssa Mandi levelled the match.

Minutes after equalising, Reims were then reduced to 10 as Jaba Kankava was dismissed, but they were hardly affected as took the lead just three minutes later, Nicholas De Préville grabbing his third of the season.

The 10-men could not hang on though, caving in the 81 minute when Polish international Kamil Grosicki salvaged a point for the visitors.

Rennes take surprise lead in at the break

Reims came into this game on a run of five successive defeats, but they looked like the much stronger team from the off as Rennes struggled to regain possession and get the ball out of their half. Diego had been their main focal point in attack and he was definitely causing his opponents problems. His first shot on target made Benoit Costil pull off an unconvincing stop and definitely boosted the confidence of the fans.

However it wasn't only the Rennes stopper saving uncleanly in the match as, between the sticks at the other end, Kossi Agassa made a feeble long-ranger from Yacouba Sylla look threatening as he failed to hold it.

Nevertheless, Reims held the balance of power in the game, dominating the possession stats and manufacturing more shots. They could have taken the lead when David Ngog jostled through the box to cut the ball back across goal, but unfortunately there was no one there to tap the ball into an empty net.

Just before the referee blew the whistle for half time, Rennes took a surprising lead through Boga. Plaudits have to go to Grosicki who controlled a long pass and headed down to the Chelsea loanee, who dribbled past Franck Signorino and slotted the ball beyond Agassa. The lead illustrated that teams can have all the possession and shots, yet all that matters is what is on the scoreboard.

Reims reduced to 10, but take the lead

It took a while before the second half produced anything close to a goal scoring opportunity, Grosicki wriggling his way deep into the Reims penalty area only to muster up a powerful strike with no direction, but once the period got underway it was an enthralling one.

Reims got the game back to a level footing when Mandi scored in bizarre circumstances. A lofted free kick into the box made the Rennes back-line collectively push forward, however the scorer wasn't picked up in an onside position and couldn't miss from close range with no pressure on him.

However, after getting themselves back on level terms, Reims suffered two set-backs in quick succession as their creative architect Diego was subbed off with an injury moments before Kankava was shown a second yellow card.

The referee had no choice but to dismiss the midfielder after a poor challenge on Benjamin Andre, but his manager was far from pleased with the decision nonetheless - sent to the stands for his protests.

Just when the match couldn't give anymore surprises and drama than it already had, Reims took the lead. De Préville cut in from the left-wing and tried audacious chip from outside the box which dipped over Costil and sent the home fans wild. They were aggravated at the previous incidents and it was a case of justice served in their opinion.

Visitors finally capitalise on man advantage to equalise late on

Nevertheless, Reims were still a man light and a manager down going into a tense last 20 minutes. Rennes bumped up the pressure and went more attack-minded as Henrique and Andre both passed up decent chances in good areas, without reply from the opposition who just tried to hold on.

The surprises just kept coming when out of nowhere though, De Preville smacking the post at the other end, almost punishing the offensive Rennes side and sealing the win for the hosts.

Still, the eventual Rennes equaliser was always coming no matter how hard the Reims defence worked. Substitute Ousmane Dembélé, under the challenge of Signorino, broke down the right and cut the ball back from the byline for Grosicki, who met it well and curled home with just nine minutes remaining.

Before the final whistle, both teams missed excellent chances to gain the lead once again. Rennes' substitute striker Giovanni Sio ended a promising attacking move by shooting inches off target, while Antoine Devaux glanced a header wide at the back post up the other end.

However, the final result would give both a share of the spoils after a thrilling 90 minutes of action.

Stoke City vs Swansea City preview: How to watch, kick-off time, team news, predicted lineups and ones to watch 2 hours ago

Watford vs Wycombe Wanderers preview: How to watch, kick-off time, team news, predicted lineups and ones to watch&nbsp; 2 hours ago 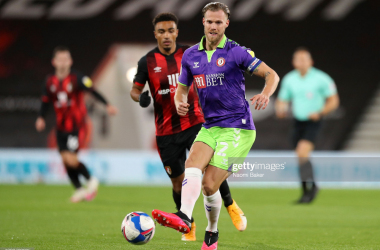 Bristol City vs Bournemouth preview: How to watch, kick-off time, team news and ones to watch 2 hours ago
//